It has been many, many moons since the battle with the Dark Forest and the clans have gone through many generations. The history of their ancestors are still kept alive through stories that elders tell to young kits, but the tales of Firestar, Brambleclaw, the journey, and other historic events are slowly fading away. After all, there is a new beginning to everything.

Two sisters, Galaxypaw and Novapaw, have finally become apprentices of ThunderClan. However, there is a huge destiny in front of them. With a prophecy as old as the stars haunting them and many other obstacles in their way, the two are faced with a huge task. Also, in a forest as big as ThunderClan's, you never know who to trust...

Galaxypaw - A beautiful, lithe light cream she-cat with flame-colored ears, face, legs, and tail and sky blue eyes. She also has a very long, slender tail and beautiful, white whiskers.
Novapaw - A tall, slender pure white she-cat with ginger patches all over her pelt and round, amber eyes. Her tail is long and thin and her nose is pitch black.

Reasons for Writing This

Reasons for Writing This

I got the idea for it during school and I finally decided to actually write it!

The message is that you can carve your own destiny. You do not have to be what your ancestors were because you are your own person. 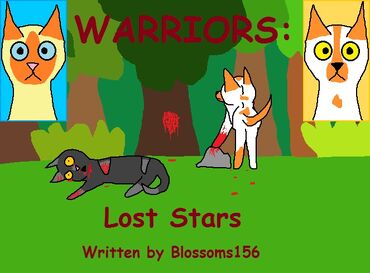 A blossoming galaxy and an exploding nova

Will take the Clans half the world over

To find the one who will save them all

Lest the Clans should first then fall

(Thanks to BladeOfHope for making this!)

Warriors: Swiftflame - A bright ginger tom with a pale underbelly and green eyes

Novapaw - A tall, slender pure white she-cat with ginger patches all over her pelt and round, amber eyes. Her tail is long and thin and her nose is pitch black.

Embercloud - Ginger she-cat with a black ear and green eyes

Eclipsedpaw - Black she-cat with a white spot on her chest

Roseleaf - Pinkish-gray she-cat with darker stripes on her legs

Elders: Oddtail - A dark tom with a permanently broken tail

Deputy: Ebonybelly - A gray tom with a black stomach and paws

Warriors: Spottedface - Muscular, white tom with a black spot on one eye

Thunderlight - Yellow tom with a white chest and muzzle

Apprentices: Stonepaw - Gray tabby tom with amber eyes and a scar over his mouth

The crescent moon in the sky cast down as much light as it possibly could onto the dark forest beneath it. A breeze rustled the leaves in the oak trees and sent a few, shriveled ones flying and then fluttering back to the grass-covered ground. Billions and billions of stars glistened in the sky and some evened twinkled once in awhile. However, many dark, ominous stratus clouds were drifting into the scene. A ravine in the heart of the territory contained many dens and cats alike. All was peaceful in the ThunderClan camp at the moment.

Suddenly, a yowl pierced the calm atmosphere and caused every cat to turn towards the source. The sound came from Snowpuddle, one of the queens in the camp. She was a beautiful, fluffy she-cat with yellow eyes as bright as the sun itself. Snowpuddle was giving birth to Swiftflame's kits!

Not soon after the call was omitted, Swiftflame dashed into the scene. He was a thin, ginger tom with emerald green eyes. Some said that he bore a resemblance to Firestar, the ancient leader of ThunderClan, due to similar resemblance. In fact, some others believed that he was actually related to the tom.

"Are you okay?!" Swiftflame asked as he approached his mate, fear in his green orbs. He was nervous and excited at the same time because he was about to be a father.

"Get...Brightleaf," Snowpuddle breathed before letting out another shriek of pain as a contraction hit her.

"I'm already here," came the voice of Brightleaf, Snowpuddle's sister, as the medicine cat padded in. "You can do it, sister. I know you can."

Another yell came out of Snowpuddle's maw and a small kit soon came out of her. Swiftflame watched as Brightleaf began to groom the kit in an attempt to warm it up. However, fear pulsed through Swiftflame as he saw the she-cat's eyes widen in dead.

"NO!" Swiftflame shrieked as he felt a tear form in his eye. Suddenly, another yowl from his mate caught his attention as another kit that looked exactly like him was born. The ginger tom lunged forward and grasped the kit in his jaws. He began to groom the kit to warm it up, but he didn't feel it breathing.

"StarClan, no," Swiftflame muttered as he tried to hold back tears. "Not another one!"

"There's two more kits, from what I can feel." Brightleaf's voice got Swiftflame's attention as he looked up at the medicine cat, who had her paw on her sister's stomach. "I can feel them moving. Maybe they'll survive." Hope sparked back into Swiftflame as he heard her words.

"Come on, Snowpuddle, you can do it!" Swiftflame shouted in encouragement as more contractions hit the she-cat, making her screech. Finally, a third kit slid out. Brightleaf grasped its scruff in her jaws, placed the kit down, and began to lick it clean.

Please be alive, Swiftflame prayed inside his head, hoping that he didn't have to witness another stillborn.

"She's alive!" Brightleaf purred, causing the ginger tom to pad over. The she-kit was rather big for a newborn, but that would make her strong in the long run. She was white like her mother with ginger patches all over her body. Her little, black nose twitched as she let out her first mew.

"She's so beautiful," Swiftflame purred. Suddenly, another yowl of pain echoed in the den. Swiftflame turned towards his mate, only to widen his eyes in terror.

"No..." The ginger tabby had turned toward his mate, only to see her snowy white fur now soaked in scarlet blood.

"I won't stop bleeding!" Snowpuddle meowed before letting out another screech. "Help!"

"This newborn is so big that she must have accidentally ripped some flesh open," Brightleaf concluded as she grabbed a few cobwebs and applied them to her sister.

"Come on, please, Snowpuddle!" Swiftflame encouraged. "You can do it!"

Another kit soon was born, causing her mother to bleed even more. Brightleaf began to groom the kit. Soon, she revealed a beautiful, light cream she-cat with ginger ears, face, tail and legs.

"She's so beautiful," Snowpuddle weakly meowed as she lifted up her head, shaking from weakness. "I'm just sorry I won't be able to raise them."

"No, Snowpuddle, you're gonna make it!" Swiftflame meowed as he flopped himself beside his mate. "Right, Brightleaf?"

"I-I can't save her, Swiftflame," the medicine cat replied sadly, trying to hood back tears. "I'm so sorry, sister."

"No!" Swiftflame shouted. "You're gonna live! Then, we can raise our two daughters together. I can't live without you!"

"I will always love you, Swiftflame," Snowpuddle breathed as she placed her head gently between her paws. Soon, her lank just stopped moving and the last breath of the she-cat left her lungs. Her yellow eyes closed forever as her spirit left her body. Snowpuddle was dead.

"NOOOO!" Swiftflame cried out, tears dripping down his cheeks. "SNOWPUDDLE!" The ginger tom burrowed his head into his mate's flank and sobbed.

"Snowpuddle," Brightleaf whispered as a tear rolled down her cheek. "I...I should have saved you. I'm sorry..."

A boom of thunder and the sudden pounding of rain indicates that the storm had finally arrived. A flash of lighting lit up the den and caused the two kits to mew from fear. Swiftflame heard the cries and turned his head over toward them, his face damp with tears. The ginger tom got up and quietly padded over as Brightleaf watched.

"My kits," Swiftflame meowed without any emotion. Brightleaf soon padded over, carrying the stillborn kits in her jaws. Both were ginger just like their father.

They're all that I have left of Snowpuddle, Swiftflame thought to himself as another tear rolled down his cheek and traveled towards his chin before falling and splashing on the ground. He watched as the ginger and white kit let out a mew of fear as thunder boomed outside and her cream and ginger sister snuggled closer to calm her down.

"I want to name all four of them," Swiftflame announced. "I also want to raise them. Snowpuddle would have wanted me to."

"But, who will give them milk?" Brightleaf asked as she placed the deceased kits down.

"Lakekit just started switching to fresh-kill, but Shallowflower still has milk," Brightleaf responded. "She's just taking Lakekit around the territory right now so she could give Snowpuddle some space to give birth. I hope that they're not in the bad weather."

"Okay," Swiftflame meowed. "I'll name the stillborns first. It wouldn't be fair for them to go to StarClan without names." Swiftflame focused his green gaze on the two ginger kits.

"Those are some good names," Brightleaf meowed. "I'm glad that there are still cats in the clan that honor our ancestors, especially since so many are forgetting about them."

"Are you sure about those names?" Brightleaf meowed, a bit of shock in her voice. "Those names are a bit odd."

"I'm sure, I can hear Snowpuddle whispering those names to me," Swiftflame answered before looking up toward the ceiling of the cave. "Snowpuddle, I won't let anything happen to our kits. I promise."

Retrieved from "https://warriorsfanfic.fandom.com/wiki/Warriors:_Lost_Stars?oldid=239948"
Community content is available under CC-BY-SA unless otherwise noted.