Welcome to the Warriors Fan Fiction wiki, and thank you for your contributions! There's a lot to do around here, so I hope you'll stay with us and make many more improvements.

Recent changes is a great first stop, because you can see what pages other people have been editing, and where you can help.

Questions? You can ask at the Help desk or on the "discussion" page associated with each article, or post a message on my talk page!

Need help? The Community Portal has an outline of the site, and pages to help you learn how to edit.

Please sign in every time you edit, so that we can recognise you!

We're really happy to have you here, and look forward to working with you!

Since you have 3 fanfics, I'll just write all comments here. They were all good! I liked the story of Rosetail and Skystar and the Ashfur story added more detail to the NP. Could you check my fanfic Wolfclan's Story and leave comments on the page if you haven't already. Thanks.Wolfstar13 00:19, 16 October 2008 (UTC)

Yes I know I did use Warrior Swears, but I didn't overdo it, did I?

I only wanted to make my story "Tornadostar's Story of the Tornadoclan Warriors" a little bit more humorous.

Here's the Kumo/Raba Picture. It's raining, just to tell you.: 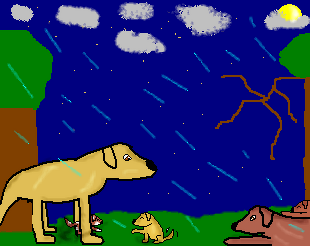 Omen of the Gleeks

I'll leave a notice to vote for who the cast should be, but you may want to speed things up and get most of the characters up.

At the bottom of the page, you may want to set up a series page, so it's like the rest of the series pages.

And this is merely my opinion. You may want to consider changing the name to just Omen of the Gleeks. Again, that one's just my opinion. GroceryBagMy Talk 19:23, December 12, 2009 (UTC)

I just wanted to say that your stories are really good, I like them a lot, well, I like the ones I've read.

Do you think you could give me a character for my series Rise of Evil? You put the character on the talk page, and you can get to the series by going to my user page and clicking on it.

Oh, and do you think you could help me make a cool siggie?

And also, Graystripe's parents are probably not Willowpelt and Patchpelt, seeing as they're brother and sister. His mom might be Willopelt, though. Quoth the Raven, Nevermore 16:36, March 13, 2010 (UTC)

Hey, Shaf! I've been reading your user page, and I see that you have an Xbox 360. Do you have Live? Just asking, but if you do, do you want to friend me on Live? Can you E-Mail me your Gamertag here? I've been reading Fuega Fuega, and, I have to say, I love it so far! You've done a good job on it!

I hope you get your computer working, I can't wait to read Fuega Fuega! *Is offended* I is not 'some random warriors fan' But it's okay. I would still like to friend you, though. When you think you can, email me, is that okay? I'll see you later then!

(P.S. I wasn't offended, I was just being sarcastic!) XD

Hey Shaf Girl!! The clans ahve been decided and I'm pleased to tell you that you're the new...-drumrolls- RiverClan deputy!!! Congrats!!! We've all decided that you're a trusted member and worthy of this position:) I didn't really know what's your warrior name, so would you midn giving me your warrior name and also a little descuption of yourself - so it can be displayed as your personality in the clan page? Also there are two apprentices in our clan: Sunnyfrost and Sashastar. I was wondering if you'd like to be one of their mentor? Congarts again and welcome to the clan!Hiddensun★It's Another World...☆ 21:20, August 3, 2010 (UTC)

I love your cats, but Starwatcher's name isn't canon, and I'm really trying to go for that. Would you mind changing it? If you really can't bear for it to be changed then fine but I'd really appreciate it. AuriBear(talk) 00:55, September 23, 2010 (UTC)

Moon isn't really a canon name either, but the Erins broke it once, so I suppose I can too. Cresentmoon is fine. Sorry about my pickiness! x) AuriBear(talk) 00:57, September 23, 2010 (UTC)

Hey Shaf Girl! I picked names out of a hat for Featured Stories and wyou were chosen! Can you please give me the name of the story you'd like to be featured for the month of January? It'll be put up January 1st and will stay up all month. People will read and comment on it, so.....yeah. lol, thanks! --Happy St. ChristmaHannuKwanzaka Navidad! Flakes falling, Christmas calling.... 19:50, December 25, 2010 (UTC)