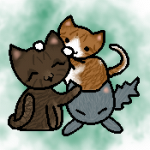 Welcome to Hawky's Talk! Be sure to stay polite

Hi, Hawk! Athena is a very pretty name, by the way, and welcome to the wiki. :) My name is Red, and I can help you out with anything you'd like - siggies, coding, whatever. I hope you enjoy yourself here, and I look forward to reading your fan fictions! The Clave has the collective intelligence of a pineapple 01:15, January 13, 2013 (UTC)

Hi! I am not from this wiki and i this Hawmask121(Athena) Knows. HI ATHENA(sister)!

Athena why do you like cats soooooo much and the warriors and Athena I will watch you here and there i will watch what you do on the internet. remember i wil always be around on the kickin it wiki! So don't bug me. Bye sister!

I just wanted to see a sim for your picture! -Elena527

Here ya go Hawky: CinderXLion F u r e v e r To make it work, go to the bar at the top with your name, tab down to My Preferences, and type { {SUBST:Template:Hawkmast121/Sig} } in for signature, withotu the spaces between the brackets. Then, whenever you click the signature button on a page, it should sign. :D Oh, and if you ever want to change it(which you will since my coding is terrible), here's the link: http://warriorsfanfic.wikia.com/wiki/Template:Hawkmast121/Sig  Hope you like it!Wanna hear a joke about cats? Just kitten! 02:40, January 13, 2013 (UTC)

Just Testing My Signature. You can add yours just for fun :3

Hey Hawkmask :D I couldn't help noticing the problems you and Rainy were having with your sig and I think I may know the solution. Under preferences, if you go to custom siggie, you will see a small box under it saying 'I want to use wikicode in my signature'. If you click that box so that it is checked then save changes your siggie might work :D I'm not sure if that's really the problem but I think it is xD ( ͡° ͜ʖ ͡°)Problem?I thought not 14:45, January 13, 2013 (UTC)

I'm Tangle, I've been here a few months, and I write the series Big Brother: ThunderClan. Im always on chat, so feel free to join me :)

Now sign my opinions! Its on the bottom of my profile page.

Well i'd love to chat with you my friend. Also I see you like The Beginning Of The End. I will check out your story.

Okay Hawky. Coding isn't that hard, once you get the hang of it(which I never have) Here's the link to your siggie page: http://warriorsfanfic.wikia.com/wiki/Template:Hawkmast121/Sig You'll notice it's in source mode all the time; that's how coding works. You can mess around with the colors, fonts, and links; you'll get the idea. ask me or Robo or someone if you need any help ;D Wanna hear a joke about cats? Just kitten! 02:52, January 27, 2013 (UTC)

LOL I AM NOT EXPERIENCED I SUCK AT CODING

But anyway, I am much too lazy to retype it usually. You can just go in and change where it says the font names, the size of the text, and the colors. Or you could redo it. Your choice. I'd go with the first one :) Wanna hear a joke about cats? Just kitten! 03:01, January 27, 2013 (UTC)

Yeaup. I think so. But still, wha? Jetfeather is waiting for The House of Hades to come out...

She's quiet and mysterious, and doesn't make friends easily, but is fiercely loyal to those she is friends with.

Okay, er... *looks for it* here it is. Ivyfleet's extremely intelligent, mysterious, quiet, fearless, and rebellious. But she's very sweet once you get to know her. She prefers to be independent and doesn't except help easily. She has many talents, including being a gifted fighter and hunter. She's very beautiful, too. She has most of the toms after her, but she has her eyes on a special tom who doesn't know that she exists. Strikeh Darkness is rising 02:22, February 5, 2013 (UTC)

Any extras? such as, preferance to the background? doing anything specific? what? Jetfeather is waiting for The House of Hades to come out...

You could create a page and call it, "Template:User:Hawkmask121/Sig"

Sure! I need right to do some of those things, but I'll do whatever doesn't require rights :D I have to go soon, though, I'll get whatever I can one now and the rest later ;) But nowthe queenhas been... Overthrown 23:05, February 25, 2013 (UTC)

All info is on the series page. The order I've written them down in is the order they cook in!

K so ideas are like major couple in fanfic that everyone loves, and do whichever you support

Well I kinda suck at explaining things but this does a really good job explaining everything to making a sig :) TheFairyPrincesses 00:35, March 23, 2013 (UTC)

It's HIMG. I know, I'm a thunderclan cat get me out of here was adopted by Mosseye, BUT I can't help but stalk and realise that on Day three yu said it should be MON AMIE instead of MA AMIE when Gray was talking to Bright. Well...MA is feminine, and Brightheart is a girl so...Isn't MA AMIE right? Sorry, French lesson. xD I'm probably wrong though. ♚TheCookieQueen♚ 16:42, April 5, 2013 (UTC)

LOL, thanks. xD. i'm not the best at French!

This has been dedicated to my favorite Hawky<333

b: give me an idea for ze daily show

Made this 'cause I liked it. xD CLICKY

OMG HOW DO YOU DRAW SO GOOD?? It's AWESOME thank you!!!

Well, its pretty awesome! I wish I had art skills like that. The best I can do is a stick figure and cartoons. xD

Hawky, the reason it says your name on Misty's userpage is because she enabled a feature that puts whoever's viewing the userpage's name into the place of something. So, her's says Hello Hawkmask121 for you. For me it says, Hello Rainsplash987 xD  22:32, April 29, 2013 (UTC)

new section cause your first one was too long. :D

It's a template I copied from Roo's page. Type in { {Template:Username} } without the spaces.

CHANGE YOUR SIGGIE SO IT DOESN'T LINK TO WARRIORS WIKI! I HATE THAT PLACE SO MUCH HSDHSFIUDFIUUSGDIDSGDSFUUDFUYF

Anywho, rant aside, I give permission xD

I'd get a siggie but

1. Dunno how to code

2. Dunno how to automatically do it.,

I want it to say

Can you do that?

Please can you check this out and comment? I would appreciate it very much. :D

THIS IS LE TEST OF LE SIG

DOES IT WORK OR DOES IT STINK?

Glad to see that you like Blood River! :D It makes HIMG very happy.

Again, please click this link and comment on the story and I will love you more than I did when you commented on A New Dawn. Thank you. :D

Wanna collab sometime? IDK what story, but your a friend and awesome. So possible collaber.

Well I had this idea of doing a collab series thing, y'know?

I made this for you. You may hate it.

NEW SIGGY SEE BELOW I LOVE IT!

User blog:Tanglefrost101/Want to vote a cat back in to BBTC? Do so HERE!

I saw on your userpage you mentioned our collab. xD Are we actually gonna start that?

I like all of these- particularly the first one about our Fursonas.

Let's keep discussing it, m'kay, and we'll se where we get to. :D

Why don't we turn TEOTH into our collab if we delete the picture etc?

Oh, I was planning on ti just being a short dedicated to you but we can change the plot ( I like your idea) so it fits both of us plus I'll get a new picture.

This is exciting, it gets my creative juices flowing!

I realised I forgot to name my kit. Can it be a girl, and can I call it Applekit?

You are a lier because I am Kyo's biggest fan XD If you think I'M a friendly face, you should meet my friend Erin-she watched the ENTIRE Fruits Basket TV show 3 TIMES!!!!!!  So, yeah. Instant best-friendship!!!!!

Hey Hawky :3 Its Ginger, and the link to your user goes here http://warriorsfanfic.wikia.com/wiki/User:Hawkmask121%7C

I've already got all the housemates. :3

I finished The Eye Of The Hawk. Sorry it took an age, is very cheesy and short...But yeah, hope you enjoy it. :D

Thanks! I just wanna say hi as well. I haven't been on for a while so... Yeah!

I put the message on there because I stalked your profile to find the Wiki with the most recent edit from you, and I found WW.'

Retrieved from "https://warriorsfanfic.fandom.com/wiki/User_talk:Hawkmask121?oldid=224788"
Community content is available under CC-BY-SA unless otherwise noted.