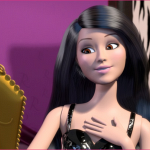 It's not tiny... it looks perfectly normal to me...

And oh... wow... *is no longer as impressed*. I was curious if you finished Quest of Courage and what you thought :P The ending was supposed to be a surprise...

Okay Ninja! Can judge them tomorrow?! Please? I just got back from a concert and I have bed in an hour. I swear I will read them tomorrow and message you the scores. Do you want just the totals or all the separate scores? Thanks! Merry Merry Merry Merry Christmas!! 05:11, December 19, 2012 (UTC)

Hey Ninja! SO ROBO *glare* ditched us and made her own thing for Fuzzy. But we're still planning to do the short story thing. It's called Good Times. Once I create it, can you leave your short story on there for Fuzzy by Christmas?(she's leaving then) Thx! Merry ChristmasHappy Holidays! 19:55, December 23, 2012 (UTC)

We were thinking just a couple of cute adventures your cat(aka, whoever your fav charrie is or whatev, like Rainsplash or Songpaw for me) had with Fuzzypelt, another cat, but you can be original if you come up with something better. ;D Merry ChristmasHappy Holidays! 20:44, December 23, 2012 (UTC)

===Hi, Ninja! But don't forget that Jetfeather is waiting for The House of Hades to come out...===

Agh! SOOOOO sorry I didn't reply sooner Ninja, I had no wifi over the holidays D: I've officially given up my admin rights, if you're wondering, but that's not the point. Is it okay if I just advertise in a blog? I'm not good at that stuff really o_o Jingle bells.. jingle bells.. It's Christmas time on the Wiki! 03:52, December 28, 2012 (UTC)

It's alright, thanks for letting me know anyways. Gah I stayed up all night last night and now I'm tired too (and hungry. I could eat the monitor right now) Jingle bells.. jingle bells.. It's Christmas time on the Wiki! 12:42, December 28, 2012 (UTC)

Yes, you love my avatar. You love it very very much.

Sorry I wasn't on-I was busy looking at a bunch of stuff x( Was there something in particular you needed to tell me?

Hey, NInja! I know you don't know me, but I was wondering if you wanted a cat for my series, Spy Torture. If you do, names work like this. Clan name: Rebel. Tribe name: in Spy Army. Please consider! Thanks!

Okay, but tell me if you change your mind!

Oh well... your "little brother/sister/friend" gets banned as an anon, and your IP gets banned too, and the admins don't unban you because they think you might be lying(whether it's true or not) ♫ Live While We're Young ♫ 16:30, May 19, 2013 (UTC)

I wasn't trying to be sarcastic but now that I think about it it does sound like I was. Sawwy!

Um... what? XD It's from an awesome song

Retrieved from "https://warriorsfanfic.fandom.com/wiki/User_talk:Evanescence.Undead.Ninja?oldid=233726"
Community content is available under CC-BY-SA unless otherwise noted.