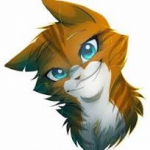 ...You CAN rename pages, you know, and you CAN edit your own stories after they've been published.

Not to be against you making fanfics, but you literally just made like six or seven in one go. Try to work on them before continuously making new ones?

It would really be helpful if you reverted your sig to what it had been before or actually make it so the links are to your actual talk page!

I'm not quite sure how you got your sig like that but if you just put four ~'s, your original, wiki-made sig should come up...

Alright. When you have the time, just send me a message with the following information:

-What you want it to say

-Which pages you want your signature to link to (one should be your talk page), and which words in the signature you want to be which link

-Colors, and which words you want to be which color

-Fonts - if you have anything in particular in mind, or a type of font (curly, looks like handwriting, blocky and bold, etc.)

-Any other effects; e.g. a shadow (like mine has), or a solid-colored background behind the words, etc.

Also, feel free to message me if something I just said doesn't make sense to you for some reason.

...Alright. I'll get on that pretty soon.

One comment: I don't think there's really a way to do "highlights" around the words, but I can do something that I think should be pretty similar to what you have in mind. We'll just have to see how it turns out... :)

Also, I'll be making it on a subpage of your user page. I'll show you how to use it when I'm done.

P.P.S. (sorry): Would you mind if I switched the links...? Most people look for the talk page link at the beginning of the signature.

Refer to my previous message, and then take a look at this page.

Alright. So what you need to do is as follows.

Go to this page: Special:Preferences

Now, if you scroll down a little, you should see a section labelled "Signature", and a little text box labelled "Custom signature". You need to copy and paste this into that box: {{SUBST:User:Bluestar1246/Sig}}

Make sure to check the box marked "I want to use wikitext in my signature" as well. Finally, scroll down to the bottom of the page and hit "save".

Once you do that, every time you write ~~~~ on someone's talk page, it will automatically turn into the signature I made for you... :)

If at any time you want to make a signature for yourself, or if someone else offers to make a new one for you, you/they should just take all of the coding off of the /Sig page that I made for you and replace it with the new signature's coding. If you're sentimental like me and want to keep a record of all of your signatures, you can copy the coding for the signature and paste it on either a /Signatures subpage of your user page or just straight onto your user page. Then you'll always be able to go back to using one of your previous signatures... :)

Heh... not everyone gets so excited about a signature... :) I'm glad you like it.

This is the wiki's chatroom. It's specific to WFW; if you went to another wiki and opened the chat there, it would be that wiki's chat instead. You can't start a chat with any one specific person; anyone can join or leave at any time. If you do want to talk with one person alone, though, there is a private messaging feature.

Uh... I don't even see that you've entered the chat. Go to this page. Type something in the box and then hit enter. We'll see how it goes.

...Here, new idea. Go to Wiki Activity. Somewhere on the right side of the screen there should be a button that says "Join the chat", or something like that. Try it that way, I guess...

Seriously, what the heck...

...We can try again another time, 'kay...? Right now all we're doing is racking up pointless edits.

P.S. send me a screenshot of what it looks like when you try to join chat, if you can

Huh... looks like it's not loading all the way. Try waiting longer before you close it out; eventually, my icon and user name should pop up on the right side of the screen, and you should get a little message at the top center saying "Welcome to the Warriors Fanfiction Chat".

...Actually, the timestamp is according to wiki time, which is based somewhere in Europe, I think. X3 It's actually almost 7:30 on the 22nd.

Hey, so... I'll try to update this page every so often, when I think of it, if you wanna take a look for some coding tips... :)

Hey you can edit your stories after you publish them. You've made at least TWO versions of "Couples that should or shouldn't have been" and these pages will only clog up the wiki. You can press the "Edit" button at the top of the page to add more to your fic, instead of making a new page.

i'm all yours, i got no control

You're being slightly rude in your new comments and they aren't contructive like the staff would hope the comments would be. You don't need to go around saying that Cinder and Lion had kits, all those authors wrote their stories quite awhile before the new series came out.

You don't need to be rude by disregarding the author's creativity and telling them it's a terrible story. Try to tone down your words and if you don't like it, don't say anything.

we are SURVIVORS of the wild

What do you mean by ' my brother did happen again'?

'Cause I've got a jet black heart

Oh nevermind, thanks for telling me (nevermind as in I get what you meant)

'Cause I've got a jet black heart

SORRY FOR THE LONG MESSAGE, BUT PLZ READ ALL OF IT. THANK YOU.

I just found your comment on my page "A Switch" as well as "Surviving a Fall", pages of my "A Different Story" series.You left a message on my talk page that you were pretty rude as WarriorZ253 and I couldn't imagine how rude you were at all. But then I saw the comments....I think I know now how rude you were then. I thought I left a message to respond to yours but now I realize I actually didn't. Ignoring those rude comments, we can be friends! That's what I wanted to say pretty long ago.

FYI, the "A Different Story" series was supposed to be not following the all the Warriors series' rules, because it is A different story, after all. So I shortened the mate thingy to a small amount of days so the page wouldnt be super long and I don't like making super long pages.And plus, Half Moon could've not realized she was kitting and she may have thought the feeling was something else for a pretty long time. Also, Jayfeather was not a medicine cat in that world--he was a warrior/sharpclaw, and being a different story, he could've lost the privileges of a med cat, making him unable to see she was expecting kits.

About the "Surviving a Fall" comment, the "YAY!!!!!!" was for the lols. I just wanted a happy exclaimation from grumpy Mousefur. I wanted to cheer her up, that's all.

BTW, I'm not signing this with my real sig because of sig malfunctions(I had to fix Pinefur's talk page because of it). I asked the admins it should be fixed soon.

Retrieved from "https://warriorsfanfic.fandom.com/wiki/User_talk:Bluestar1246?oldid=331690"
Community content is available under CC-BY-SA unless otherwise noted.