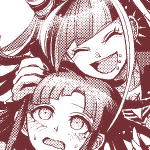 aka clem, destroyer of worlds

Currently writing: My Dirty Little Secret, Heart of Diamonds, Everything Was Blue

welcome to cleverstar's den. please, take a seat, and allow me to fetch you something to eat.

"if you pronounced thursday like thaursday... that'd be kinda funny..."

i'm canadian! and i like to make jokes about not being straight. my favourite pieces of media (lol) are danganronpa, ace attorney, persona, boku no hero academia, and haikyuu!!

more about me, but like, in bullet point form, so it's easier to read

-name: i'm clem.... to y'all
-grade: ten
-favourite video game: danganronpa
-favourite food: w a t e r m e l o n
-favourite book: simon vs the homo sapiens agenda by becky albertalli
-quote of the day: "if all you do is look down on people, you won't be able to recognize your own weaknesses." -bakugou katsuki
-things of interest: scented candles, journals, glass jars
-passtimes: drawing, writing, watching youtube, playing video games, walking aimlessly like an npc
-what's on my mind?: i can't get two trucks by lemon demon out of my head

cleverpelt: brown tabby she-cat with white paws and tail tip, underbelly, and ears. she has bright blue eyes and wears an ascot.

My Dirty Little Secret: Brindlepaw and Brownpaw are about to become warriors, and they have the whole world laid out in front of them. They couldn't be more excited... Until the Clan's medicine cat shows up, killed, and Brindlefrost forces herself onto a path she'll have to walk without her best friend. Full fanfiction (10,000 words+). IN PROGRESS

Time: Amberpaw is a conceited apprentice who doesn't want to improve his skills, and thinks that all of his training is pointless- he's perfected everything, so why is he forced to practice with the younger apprentices? But then he and Maplepaw get close, and he realizes that time has been his enemy the whole time. Short story/side project. COMPLETED

Heart of Diamonds: Mistake is a young kitten living with his father, but something is off... Mistake is able to visualize scenarios in his head and see things he shouldn't be able to. When the cats of the Alliance catch wind of his power, they figure that he may be the Prophet they've been searching for for years. IN PROGRESS.

Everything Was Blue: A self-assured, rowdy apprentice and one who is calm, smart, and composed. Quailpaw has never liked his denmate Bluepaw- he's too uptight and never wants to have fun. But as Quailpaw discovers Bluepaw's secret, his perfect persona begins to fade. Is it really true that opposites attract? Short story. IN PROGRESS.

tadpole's death is the saddest thing i've ever read. also when bluefur had to tell whitekit that snowfur wasn't coming back.

ivypool should've been made deputy!

Retrieved from "https://warriorsfanfic.fandom.com/wiki/User:Warriorlover12345?oldid=352737"
Community content is available under CC-BY-SA unless otherwise noted.