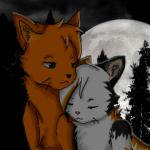 "Honestly!" she exclaimed as she spat out the last of them and shot an exasperated glance at Brambleclaw. "Do you toms do anything but argue?" "It's what they do best," Tawnypelt mewed, a gleam of amusement in her eyes. - Feathertail and Tawnypelt Midnight; pg 205

Wariors may fight feirce in battle but when it comes to a thorn they whail like a kit." ----jaypay the sight

Birchfall: "You're not very sympathetic for a medicine cat. "Jaypaw: "I'm here to heal you. If you want sympathy, go to the nursery." —Birchfall and Jayfeather Dark River, page 99

If we don't help cats who are sick or injured, we might as well be loners and rogues." —Jayfeather to Icecloud Sign of the Moon, page 38

"There are no herbs that can take away memories. You just have to learn to live with them." —Jayfeather to Bumblestripe The Forgotten Warrior, page 9

"You'll never win! You can kill me! But that won't stop me! I´ll find you beyond my death, and I'll stop you!" —Jayfeather to Tigerstar The Last Hope, page 79

"You idiot!" she spat, flattening her ears. "What are you doing in my territory?" "Drowning?" replied Graystripe. The silver tabby flicked her ears, and Fireheart saw a glimmer of amusement in her eyes. "Can't you drown yourself in your own territory? "Graystripe's whiskers twitched. "Ah, but who would rescue me there?" he rasped . - Graystripe and Silverstream Fire and Ice; pg 129

"Join you?" Bramblepaw growled. He paused, swallowing as he fought to control his anger. When he spoke again his words rang out clearly so that every cat in the clearing could hear him. "Join you?" he repeated. "After everything you've done? I'd rather die!" - Bramblepaw The Darkest Hour

"Well, I'm more lopsided than a one-legged badger," mewed Graypaw, breaking off from his careful stalking to stagger comically across the clearing. "I think I'll have to settle for hunting stupid mice. They won't stand a chance. I shall just wander up to them and sit on them till they surrender." -Graypaw Into The Wild page 68

Retrieved from "https://warriorsfanfic.fandom.com/wiki/User:Starkit-Shinningstar?oldid=131290"
Community content is available under CC-BY-SA unless otherwise noted.