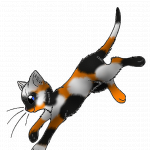 Hello and welcome to my profile.

Name: Not saying. Age: 13-18 Gender: Female Things I Like to Do: Watch anime, read, and write. Anime I Like: Hetalia, and Attack on Titan. T.V. Show I Like: Star Trek, SNL, Doctor Who, and Monk. Favourite Book Series: Warriors. Bands I Like: Coldplay, The Beatles, ELO, Moody Blues, and Men at Work. Pets: A half Maine Coon cat named Mara.

Frozen River Summary: It's about two cats named Runningpaw and Sunnypaw. Sunnypaw is a medicine cat apprentice who receives a prophecy from StarClan. Shattered Heart Summary: Stormwing's mate, Rabbitwhisker is killed and he must find the murder with the help of his apprentice, Ashpaw. Untrusted Summary: For Gingerstripe's Contest. It's about an apprentice named Sootpaw who witnesses her mother, Mousestrike, kill her father, Brownstar, and needs to find someone who believes her. Warrior of StarClan Summary: For Shinestar212's Contest. Most cats spend their first time as a warrior helping out their Clan, but not Firespirit. Due to her bravery in a battle against a group of rogues, she is given her warrior name right before she dies of severe wounds. She must spend her first time as warrior dead in StarClan unable to help her Clan as they are killed off by the rogues.

Retrieved from "https://warriorsfanfic.fandom.com/wiki/User:Splashcloud?oldid=227184"
Community content is available under CC-BY-SA unless otherwise noted.