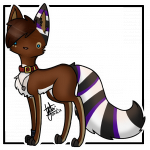 663 Edits since joining this wiki
May 20, 2010
(Difference between revisions) |
70
User talk:Poppyshadow

Okay this is me Pebbleshine. I'm changing my account cause I want to start anew so yeah I'll be deleting all I did before but 2 of my stories. (Even though I only have 3!!) so yeah thats it and can you plz vist my site http://longtriphome.weebly.com. Thks!

(Cat) a black she-cat with a white chest and muzzle. has a purple stripe running from the tuff of hair on her head to the tip of her tail. Has 3 green and white stripes on her tail, has green ears and has purple, green and white paws (In that order each paw upwards). And lasty has bright, deep blue eyes.

I like writing stories, history, dogs, parrots, chatting with friends, staying up late, eating samon, not doing homework, going on the trampoline and Swimming.

I dislike homework, teachers telling people off for no reason, geese, waking up early, being untidy, being told what to do by extremealy bossy people that hate me for no reason, being on my own and i dislike being clawed by my cat!

I love cats, drawing, reading, being with good friends, my crush, people who like me for who I am, my pets, my friends (in a friend way), graphic designing, using/ fixing technical things and being plain random!!!

I hate animal crulty, being told i'm wrong when I'm some times right, how forgetful I am, the boy in my form who think their cooler than anybody when their just jerks, my spelling (Its terrible!!) and I hate it when some people destroy my belives and my imagination just because they don't like what I like!!

Pets: A cat called Roxy, a parrot called Ferny, 3 hamsters called Pancake, hamette and 1 that hasn't been named and lots of fish!

P.P (Past Pets): A goat, more fish, 3 guine pigs (or however you spell it!), 2 hamsters called Jake and Jo and 2 dogs called beaver and (reasently died *sniff, sniff*) Bessie.

If ya wanna know anything else 'bout me just ask!

What I want to do!

1. find my old stories and delete them if I haven't already.

2. At least create 2 stories by the end of the month.

3. At least create 6 stories by the end of next month.

4. Make friends with most of the people (or cats) on this wiki!!

Retrieved from "https://warriorsfanfic.fandom.com/wiki/User:Poppyshadow?oldid=47121"
Community content is available under CC-BY-SA unless otherwise noted.