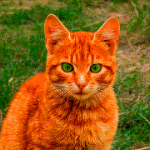 Fly to Your Dreams!

I am Peroncat. also known as Firestorm, Firey, and(Less commonly) Peronny. You can find me working on a few of my fanfics, and as a featured user. I am currently the founder/admin of Crazy fanfictions, stories, and characters wiki. I am friendly, I guess. sometimes I can be a bit grumpy and impatient. sorry about that. if you wonder which exciting fanfics are written by me, please visit Codebreakers-The Charming signal! that is really fun book, I guess. other books from Codebreakers series are, Codebreakers-The Struggling heir and Codebreakers-The Heart of Fire! and I am going to write a fanfic with Lightstorm, and Wolfy10. its title is The Heart of the Cats. we're still working on it, but if it is done, it would be great! enjoy!

Sunshineheart - flame she-cat with brilliant blue eyes, forbidden daughter of Ashfur and Squirrelflight (Lightstorm used her in her fanfic, I gave her permission), ThunderClan

Braveheart - Gold she-cat with streaks of brown and with copper eyes, ThunderClan

Minuetastar - Blue-gray she-cat with creamy white tail tip and amber eyes, Faith in the Stars(A group of cats formed from descendants of the five Clans)

Imaginekit - Gray she-kit with golden ear tips and startling green eyes that seem to be daydreaming all the time, Faith in the Stars(A group of cats formed from descendants of the five Clans)

Whisperkit - Black tom-kit with a gray left paw, golden eyes, Faith in the Stars(A group of cats formed from descendants of the five Clans)

If Tigerclaw wasn't a meanie

If Bluestar did not became mates with Oakheart

Heart of the Cats series

The Heart of the Cats

Five Clans, different cats. How will their hearts change when they face a great danger?

Figure out how Stormstar and Peachpelt became enemies. will they ever be a good buddies and sisters again?

Hearts of Ice and Fire (Will be written by Lightstorm)

Flamefire is Firestorm's sister, and she follows Stalewhisker to ShadowClan, for she loves him. Stalewhisker is medicine cat, he will never became Flamefire's mate. but what if... she have a kit? Jinglepaw, Flamefire's kit has no mentor. how will Flamefire respond?

Moonshine is friends with Hollowfoot the WindClan cat. Moonshine might even want to go to WindClan... what is she gonna do?

Illeyfeather, RiverClan's respected medicine cat, has big secret. What could it be?

Some of them are requested by Brair.

Be our guest(Collab with Light and Brair)

Struggling in the Grass

Disaster: When the Stars are Against You(or just Disaster, however you want to call it)

After deaths of many cats, everything has reborn. Among them is somebody you will remember...

Dream is just a dream, someone says. What if it is not true? In the last book of The Rising Prophecy, figure out How cats will survive the storm of burning dreams.

SongClan has always stayed inside their territory. Among them is a secret that Moondaisy, a beautiful SongClan princess is keeping...

Dawnflight had a kit named Snowykit. In Snowykit's dreams, a cat keep bothering her... and Snowykit realizes something strange.

Firespirit was twitching violent in his dreams. Spottedflower, on the other hand, was anxious. She had gotten a prophecy, telling her to find a new group of cats whose have similar tradition. Who could that be? Follow the adventure of Hopesong, a young warrior of Ancient Tribe and Clans, as she begins to unravel the secret.

*I was named after Firestar, the greatest leader of all time.

*My favorite OC is Prospectheart!!!

*My siggies are, User talk:Peroncat, Firestorm-living in world of fantasy, and You can talk with the stars, and I can ride lightning. So let me take you to infinity, and help me ride my dream to the clouds.

*My favorite quotes are *Fly to your dreams* and *I don't know why butterflies are called butterflies. Why shouldn't we call them flutterflies?*

My favorite warrior names(Not my OC!)

Basically that's it for now.

My favorite fanfics!!(Written by me)

No.1: Struggling in the Grass

If I could pick only one fanfic that I really love, it would be definitely Struggling in the Grass! I have put so much time into it, and that has the best plot I have ever, well, plotted! It's the best fanfic I have ever written so far :)

Bravekit don't know anything about bravery, so much as her long-lost parents. She has no one who cares for her--except for some. The leader of her Clan hates her, and what can she do about it? She doesn't know, however, that a big turn in her life is about to come sooner than expected.

This is my second favorite fanfic! I really ship Crow x Leaf so I wrote a fanfic about those two. If I could write real warriors this is what I would do :) I LOVE CROWPOOL (sorry, Crowtail shippers or Mothpool shippers!)

Death beyond deaths, a single quest to end them all. Will Leafpool accept the last quest of her life, and be reunited with other cats she love... or will stars fade like the lines in the prophecy?

Okay, well, I can't really say that this is my fanfic. This is a collab by Light, Wolfy, and me. But some of the chapters are written by me, and us three are doing a great job so far! In my opinion I like the plot and OCs. I think they are really creative :)

Five cats from the same father, all treated as traitors for the Clan... Can anything change? If so... will a young cat named Prospectkit's life change? While others face impossible challenges, nothing ever seems to fulfill any destinies. Cats must settle their hearts in order to live up to their destiny.

No. 5: Disaster: When the Stars are Against You

My Opinions on Cats

Firestar: YOU ARE AWESOME WOOHOO It is so sad when he dies tho...

Spottedleaf: SPOTTY WHY WHY DID YOU HAVE TO DIE TWICE

Sandstorm: You are a generally nice cat, I like your firm and determined attitude :)

Sol: HOW DARE YOU STEAL MY FRIEND'S NAME I HATE YOOOOUUUU FOREVER AND EVER YOU IMPOSTER

Hollyleaf: I thought you were paranoid at first but as the book went I came to love your characteristics! WHY DID YOU HAVE TO DIE YOU HAD SO MUCH TO DOOOOOOOOOO you definitely deserved power, not that imposter DOVEWING

Dovewing: Why did you have to have that freaking power? If you did not have any power, I would have loved you more!!!!!

Ivypool: I am so sorry for you not getting attentions. I like you more than your sister so don't worry you will live forever in my heart!

My common warrior name is Firestorm, although my spirit lives in Peronsong too. I am from ThunderClan, and my parents were Evershine and Blazestream. Evershine, my mother, was a white she-cat with patches of brown. She also had green eyes. Evershine was a gentle warrior at heart, but did not lose her fierceness in battles. Blazestream, my father, had golden-brown fur with blind blue eyes, and although he was blind, he was one of the best warriors in the Clan. He was ferocious, and did not hesitate to put his Clan over his life. When I was an apprentice, my parents both died trying to defend the Clan from a Monster who escaped Thunderpath. They sacrificed themselves to destroy the monster, leaving my brother Goldenflame(Goldenpaw at the time), and me, heartbroken. A queen named Lifebird, a blue-gray she-cat with brown eyes, now an elder, took care of us then. Now my brother and I are both warriors, and Goldenflame is the deputy. My leader is Flyingstar, once known as Flyingwatcher, who is my best friend since kithood. I live a perfectly normal life in a perfectly normal Clan.

Retrieved from "https://warriorsfanfic.fandom.com/wiki/User:Peroncat?oldid=369675"
Community content is available under CC-BY-SA unless otherwise noted.