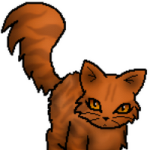 I'm a 15-year-old female, who is a Warriors nerd. I have ADHD, and I'm sensitive. My top three favorite cats are Feathertail, Mothwing, and Brackenfur. I don't know why I picked some not-very-popular cats haha

Paintfire is my main fursona. My top three favorite non-fursonas are Spotted, Jasmineleaf, and Vinetail/Vine. Vinetail used to be a rogue, so that's why I put Vine. Learn more here

Paintfire - My fursona. She looks like my profile picture. Her personality is caring, stubborn, hopeful, and secretive. She portrays me, so that's why I love my little kitty ;)

Spotted - A loner. She is a tortoiseshell she-cat with amber eyes. Her personality is helpful, easily angered, excitable, and stubborn.

Jasmineleaf - A cat of OakClan. She is a white she-cat with brown eyes. Her personality is sassy, hopeful, thinks highly of herself, and energetic. I love this kitty's sass ;)))))

Vinetail/Vine - A yellow tom with an unusually long tail. His eyes are blue. His personality is cheery, a tiny bit dull, excitable, and easily angered.

Snowyrain - White she-cat with dazzling blue eyes. She's kind of a girly girl, really caring about her fur and not wanting to get messy. Her personality is dramatic, helpful, careful, and a bit lazy.

Cinder - A gray she-cat with green eyes. She has a crush on Dark (below). Her personality is defensive, nice, silly, and active.

Dark - Black tom with darker black stripes and yellow eyes. He doesn't like being around other cats much. His personality is secretive, shy, mysterious, and kind (once you get to know him).

Vanilla - A white she-cat with yellow eyes. Her mate is Thorn. Her personality is daring, creative, emotional, and happy. Her mate, Thorn, abuses her, but she doesn't seem to notice.

Thorn - A dark brown tom with dark blue eyes. His mate is Vanilla. His personality is abusive, brave, wanting to prove himself a lot, and pessimistic. He always looks at the dark side of things, knowing he will go to the Dark Forest when he dies.

Graffiti - Graffiti is Paintfire's brother. He is a ginger tom with a white belly and vibrant green eyes. He is a loner, in the city.

(Keep in mind these are only major OC'S)

MyrtleClan - This Clan doesn't take warrior names, instead, they have one-word names, with the exception of Snowyrain. The cats inside are Cinder (leader), Dark (deputy), Vanilla, Thorn, and Snowyrain. Their loner ally is Spotted, who is thinking about joining, but at the same time, still wants her freedom.

OakClan - The neighboring Clan of FirClan and MyrtleClan. The cats in this Clan are really average, but there are cats that stand out. A few cats inside are Paintfire, Jasmineleaf, and Vinetail.

FirClan - The final Clan. FirClan is really mostly a background Clan, but is featured in Paintfire's Faith. The leader is Fernstar.

Paintfire's Faith (Finished!) : Paintfire is no average cat. She hates fighting, thinks battles are worthless. 'Why not become a medicine cat?' You might ask, but Paintfire still wants to hunt and help her Clanmates win. But still, she doesn't feel like she fits in so she runs away. Her faith in StarClan is tested, and she must follow her heart. Where will she go? Now homeless and foodless, she must find a place that suits her.

Oh Velma // FirClan Songfic (Finished!) : Fernstar has recently become mates with Cedarwing. His former mate, Sparkfang, is jealous, but she finds new grounds, but that causes even more trouble. Cedarwing has done something terrible, and Fernstar has turned her back on him. But now... He wants Sparkfang back. But his heart is also aching for Fernstar. Now, he's caught in a love triangle.

Saint Bernard // Graffiti Songfic (Finished!) : This is a songfic explaining Graffiti's backstory, and a lot about the relationship between Paintfire/Paint, Graffiti, and Canary.

Burning Dusk (WIP Alert!) : MyrtleClan has come across a problem. StarClan has a prophecy for them: 'The burning dusk will die, and you must be alone'. No cat knows what it means, but they're all panicked. They constantly pray and ask StarClan for answers, only for none to be told. It's confusing them, and when it finally happens, the cats scatter. Running in different directions, they can't find their way home. What will happen? They must learn to survive alone.

Sympathy - Violet is now the leader of MyrtleClan, and has so many stressful duties. But, her heart is torn when she can't decide between her mate and kits, or her Clan. When a new rogue comes into the Clan, she feels a new emotion - called sympathy. She takes him in, and maybe he can change her mind forever.

Paint was born a loner kit to a cat called Glacier. Her brothers were Graffiti and Canary. Their mother was killed, and they were taken away to the Clans at a young age. Graffiti and Canary escaped, leaving only Paint to suffer this fate. She was adopted by Bluefang, a kind and caring mother. At about 6 moons, she forgot her early life and became an apprentice. Her mentor was Whispernose. He was a mysterious mentor, but very clear in learning moves and tactics. She became well trained, and moved on at higher speeds than most apprentices.

She starts having mysterious dreams, and wonders what they mean. That is until Vinetail gets a prophecy from their crazy medicine cat, Hawkfeather. It states, 'when the plant meets burns, the plant will die'. It's not obvious until Paintfire has a dream about Vinetail being killed by a flat-faced black cat.

She gets distracted from this, though, when battles start raging. Her Clan meets FirClan in battle and she feels sorry. So at the Gathering, she's shameful. She makes a new friend, Solarnose. She also promises to FirClan's medicine cat, Whitejaw, that she will bring his Clan prey. She keeps the promise and hunts on the border, giving him most of the food she catches.

When Dashstar offers to Paintfire to train as a medicine cat, she refuses and runs away. She gets Cut by The Cutter, and is lost for a while. On her way, she finds a Twolegplace. She talks to a cat, Fireball, and meets Graffiti again. They get along for a while, and find out Canary is in a Clan. MyrtleClan. They attack MyrtleClan, and Graffiti dies in the process. Grief-stricken, Paintfire takes Canary home. She decides to go back to OakClan, having faith in them. The prophecy is taking place. Trouble has arisen from a cat called Burnscar. Vinetail and Burnscar eventually fight, but Paintfire intervenes, killing Burnscar.

Vinetail later dies of wounds. Paintfire cries, believing it was all for nothing. Her brother, now Canarytalon, tries to console her, but she later dies from a terrible fire that ravaged the camp.

Retrieved from "https://warriorsfanfic.fandom.com/wiki/User:Paintfire?oldid=351170"
Community content is available under CC-BY-SA unless otherwise noted.