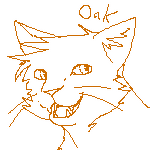 Sign if you wanna be buddys! *bribes you with a shiny car*

Give me a macadamia nut cookie and I'll sign TWICE!! Lovefur and SugarheartThe two founders of the Catanese Clans and the love we all share now 22:52, September 17, 2010 (UTC)

This is from me AND Zaf.2, who insisted on being involved even though I insisted that she didn't really need to. Then she started crying, so, like I said, this is from both of us. :D ASH!! She must return, or I will threaten you with rhinos! 02:56, December 29, 2010 (UTC)

Can I have a shiny new kitten instead? :D TANGLE LOVES KITTENS AND NACHOS, BUT NOT KITTEN NACHOS XD Hai Oak! Friends? BLAH Blah to you. -_-

Retrieved from "https://warriorsfanfic.fandom.com/wiki/User:Oakstar?oldid=351584"
Community content is available under CC-BY-SA unless otherwise noted.