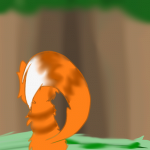 Let's start off simple, i'm Flameheart! Otherwise known as Flamey, Flame, and many other things. But, hey, call me what ya want! I wont judge! I enjoy writing stories here on WFW, and have suddenly found myself to be a semi-senior user here. I hope I can stay here for as long as possible, and be able to read as many stories as possible. You can find my own stories listed below

Badgerkit is a rogue kit found by the gorge by the Windclan deputy: Chippedgorse. But by the time Badgerkit is four moons, things may take a turn for the worse, or the better... As Wildstar turns up dead in the night, Chippedgorse takes over Windclan. And turns almost all his focus on her.

The Five Petals of the Blazing Star

Five apprentices are chosen out of the five clans, to escape the sickness spreading through them. To keep the warrior blood of the clans flowing through the forest. They must use their traits to work together, will they be able to survive?

Copper is a tomcat, the 'leader' of the Deep Routed Rogue. With his mate: Bright. These rouge cats have lived in these thin woodlands for generations upon generations. While the group does not attack each other, if kits are born. It is mostly up to the parents to feed them, and raise them. There are no true ranks. Just a peaceful group. Until a she-cat named Oracle storms into the clearing, spouting about terrible visions of destruction and death.

Now the group must move from their woodland, before they are destroyed with it. Will they be able to survive exposure to fire, hawks, foxes, and more?

Pricked on Every Thorn

A love drama between an apprentice named Scarletpaw, and her crush Coldpaw. Going into warriorship, Scarletpaw quickly discovers that her crush has when paws over tail for a she-cat in another clan named Roseclaw, the deputy of said clan. She turns to his brother, Jasperpaw, for support. Only to discover he has harbored risky secrets of his own. . .

Arch seeks to end the clans and their selfishness by destroying them one by one, and Shadowclan is her first target. Will Arch succeed in her dirty plans, or will she fall just like every other menace in the clan's history had done?

When Crowfeather discovers that Leafpool is having his kits, he is determined to father them. That meant leaving Windclan, and Nightcloud, behind. Flash forward to moons in the future, and the prophecy cats destined to hold the power of the stars in their paws are met with a difficult challenge: A fake three. Now the clans must decide: Who is real, and who is bluffing?

Retrieved from "https://warriorsfanfic.fandom.com/wiki/User:Flameheart2004?oldid=360297"
Community content is available under CC-BY-SA unless otherwise noted.