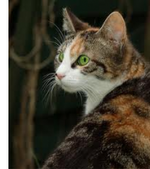 ATTENTION!!!!! I WILL NO LONGER BE ON WW, BECAUSE I'M NOT REALLY INTO THAT. THANKS TO EVERYONE WHO HAS BEEN KIND TO ME. I'LL ALWAYS REMEMBER THE FUN I HAD HERE.

So, I tried to write fanfiction on Warriors Wiki when I first joined. Yeah, you only make that mistake once. But other than that, I love Warriors. My series is called "Battle of the Stars". The first book is called " The Seven".I'll most likely change the title, though. The prophecy is this:"Peace was brought by the gentle Dove, but Seven must now unite to destroy the deepest Evil". See. Even that's crappy. I would like to hear you ideas, though. Who know, maybe they'll be better!( what am I saying;of course they'll be better!)

I m also working on a story titled " The Darkest Heart" All I'll tell you is it's about a very peculiar kit. Beware!

So here is a slide show of all my 'chosen' cats in my trilogy:

Here are some other characters I decided to add. I will also make slideshows of other categories, such as _________clan's warriors/queens/apprentices/kits/elders and clanless cats. Just ask me! The slideshow go in this order: Leaders, Mentors of 'the Seven', Medicine Cats, and featured slideshow.

About the Real Me

Now, like the rest of you peoples, I am a human being, not just Cardinalfire. Here's some other stuff I think you should know about me:

I am a brand-new teenager.

I don't get grossed out easily. No, seriously, I have been able to watch open-heart surgery since I was 4.

I am also writing a book about dragons and dragon-riding. No, not like Eragon.

I enjoy writing, reading, jumping on my trampoline, drawing, and medical shows.

I HATE stupid questions. I get enough of them at school, so if you ask " is this site for fanfictions?" I will kill you!

My favorite movies are Alien, A.I., Tangled, Rango, all Miyazaki's films, all the Harry Potters, and The Bad Seed.

I also REALLY enjoy music. Not the class, just listening to it.

Some Other Random Stuff

So, like some, I have certain songs that, when I listen to them, remind me of a certain warrior/medicine cat. So, I will put the list here:

so, yup. That's all I can think of right nowXD

Where Else Can I find You?

You can find me at

Retrieved from "https://warriorsfanfic.fandom.com/wiki/User:Cardinalfire1234?oldid=122244"
Community content is available under CC-BY-SA unless otherwise noted.