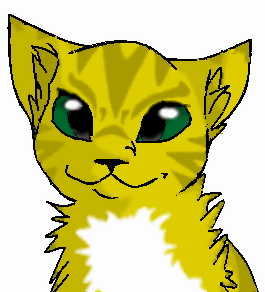 Hi I'm AutumnSky! I love Warriors and Total Drama Island. Read my new stories Total Drama: Warriors Edition, Frostfur's Destiny, One Word Stories, Foxpaw's Guide to Being Reasonably Insane P.S. I now have a Deviantart page (yumberry8@deviantart) so check it out! And if you see the pic above, please don't steal or alter or use it at all.

That look in her eyes

ATTENTION!: I won't be on a lot anymore because I am having a few auditions with the John Robert Powers co. and I need to prepare to make sure I get a call back.

Feb 15, 2010- I'm back from Holand. Good part, I got to meet Amy's boyfriend and my rugby team made it through the semi finals, but at work I've been assigned to two snake cages and at the shelter, I had to help euthanize two dogs and three cats IN THE SAME DAY! RIP Goo'dy, Allegiano, Hans, Akahana, and Mami. Back to the bright side, a litter of four kittens, Fiamma, Lokapele, Nerina, and Fedele, and a french bulldog, Nerio, were adopted.

Feb 16, 2010- I broke my toe at rugby practice. That's a no-no for any surfing, lacrosse or anything enjoyable. Bright side! I learned how to whistle! Also, I've been thinking. I've started to lose interest in Warriors so don't expect me to be on as often anymore, sorry. I mean, I have other things to do and I can't be expected to spend hours on the computer doing something I don't have very much interest in anymore. Sorry.

Feb. 17, 2010- Crap. The Valentines Day dance is coming up and guess what, my dress was ripped! It was beautiful, a Forever 21 strapless pink dress that cost me a total of 150 dollars! I have two days to get another dress for the dance, so it's off to the mall I go!

Feb 18, 2010- Ew, I was assigned two speeches, one free choice and one a pre chosen topic. I chose the first one on the history of Winnie the Pooh (dream topic!), but the other I have two do on a sub division of botany and horticulure (whoopdi-do...). I was assigned floriculture, the cultivation and domestication of flowers and such (not to be confused with aboriculture). Good news, I found a new dress for only $30. It's not as nice, btu I still love the design! Also, fruit has begun to grow o our dianella plants! Horray!

Feb 19, 2010- What a night. The Valentines Day dance was a blast and, considering our school was the only girls school invited, was filled with guys. At the dance, you can place a vote for who you would most like to dance with and the top five girls and boys with the most votes are announced towards the end. I came in fourth with a total of 32 votes behind Audriana S. who had 34 votes, Carly with 38 votes, and Belle L. with 45 votes (Like seriously, she deserves it. She is drop dead beautiful) Afterwards I went bowling with Carly, Allison and a few boys until 11:30.

March 2, 2010- Today I got a package from my cousin in Tennessee. Inside was some Ghuiradelli chocolate and a "Pokemon" game. What's a Pokemon game? Is it popular in the United States? What is the aspect of the game, to beat up other animals? I'm confused...

April 27, 2010- After a LONG plane ride, me & Carly (and our families obviously) landed in Delaware. It is much different here than last year, but there have been some sweet waves, good news for my surfboard!

May 1-2, 2010- Wen't to Warped Tour. It was SICK man! My love for inde. (AKA Independant) Alternative is even greater than before, if that's possible!

May 7, 2010- Weird week... 1) I'm thirteen, and we have just started to plan my debut ball (that's a Filipino coming of age ceremony. Yes, I'm 1/4 Filapino, but my Lola really wants me to have one) 2) Tried "Rita's for the first time and it was good! 3) Broke my wrist surfing yesterday, that's a no-no for Volleyball, swimming, lacrosse, rugby, gymnastics, fencing, you know what? Just anything fun, escept writing! 4) My cousin Octavio brought a friend over and he was SMOKIN! His name was Brent and he asked me to the movies on Saturday and I said like "Of course!" Though I could have handled that with more class... 5) Auditioned for "Once on this Island" for a local theatre yesterday, got a call back as the parts of "Asaka" and "Andrea Deveraux". My call backs are on Monday, wish me luck!

May 20, 2010- Going to DC in a week after being invited to go to a special showcase for aspiring scientists. I'm in the Zoology class for it with ten other people. I am specializing in Ethology.

July 25, 2010- Just watched TDWT Aftermath today, dang Bridgette can sing! I really hate Alejandro for manipulating her, but can't always get what you want, can ya.

I am from James and Lisa, Yvonne and Jules, Guillermina and Rudolfo.

From laughter, tears, intellegentce and beauty.

From the crystal waters of the Phillipines, the rolling plains of the prairie, the whispering winds of the Ozark mountains.

From the soldiers of justice, the foolish ambition of traders, the pride of the victory.

From the humid mist of the Fisherman's cast, and the loving caresses of the mother.

I am from the little room bainted blue and dappled with balloons.

From the white house on the hill, the neighborhood family, the murky hotel room with a flickering bulb.

From the wag of the dog's tail, the pleading gaze of the stray of shelter.

From the sweet smile of the little one's pleasure, the patter of flip flops, the linked arms trust bonded together.

I am from the crashing waves of Bethany, the rushing creeks of Woodcrest, the print of water moccasin.

From the trees of tire swings, clubs, pirates, and imagination.

From the burning rays of the California sun, the sweet smell of the grill roasting.

I am from the summer bike rides, the lasting evenings, the games of HORSE, the laughter of family.

From the serve over the net, the swish of my lacrosse stick's force, the last rock to reach.

From the vanilla ice cream dripping on the curb, the lights of the ferris wheel glowing through night, the crunch of sand under bare feet.

I am from the rebels of Mississippi, Riveter and lady alike, the chorus of voices singing the tune.

From tooth and claw, the poets flowing words, natures song.

From the light fluff of the clouds, the radiance of the water flowing above head, the drizzle of rain beading my face, the strike of lightning light up the clouds.

From the iridescent colors of the hopeful rainbow dawn, the hope of this and the future of ligth heart and soul.

I toss and turn through dreary night.

My eyes are bloodshot red.

Everytime I close my eyes

Your image fills my head.

Your death was a true horror,

Crushed upon your chest.

I promised I loved you forever

As I laid you to your rest.

The breezes call your name,

They tell me not to worry

For our love is never done.

I look up at the solumn moon

It reminds me of your sunny eyes

As its rays cut through the night.

These thoughts make my chest swell,

A smile spread over my lips.

to thoughts of glory and whisp.

I realize you've left me here

With a pawprint on my heart.

Till death do we part.

(I hope you like it! It is based off of my story, Lose You)

It's My Birthday Party on Monday July 6! Here's my list of presents:

Tickets to a Taylor Swift concert in the fall (Thanx Shavivi and Lindy!)

2. I play guitar and I sing for my band, Twelve Cord Revolution

4. In fifth grade, I won a state wide writing contest with my short story Black Falcon(a short story about African Americans in the south)

Get a story on the Editor's Pick list [X]

Get a story on the Most Visited list [X]

Get a story on the Highest Voted list [X]

Get 2 stories nominated as Featured Stories []

Get a story to become a featured story []

If you've seen my userpage on Warriors Wiki, you've seen my rant about plagerism and how most good plots come from life experiences. I've decided to list some of my problems and I may develop them in a story. I do have a few spoofs and stories that I may put up for these

- Overreacting to an injury

- A huge prank devised by your BFFFL's because you play too many pranks on them on April Fools day...

- Spacing out during class (or training in a warrior's case)

- Being an accident prone

- Being ganged up on frequently (they're just jealous *sniffle*)

Hey peeps! I know I haven't been on a lot and I probably won't be on for a little bit longer.

Anyway, for those who are on frequently, I have a challenge for you:

I challenge you to write a three or more chapter story. Here are the requirements:

- They can't be about main warriors characters (Lionblaze, Sandstorm etc.), they have to be about a supporting character whose life hasn't been explored (Petalfur, Graymist, Crowfrost etc.) Try to use your imagination

- It has to be finished by New Years Day

- It has to be about a real warriors character (If you did it about your own characters, it would be too easy)

- This isn't mandatory, it's just supposed to challenge your writing skills

- Have fun while writing!

- It has to have a real plot with a exposition, climax, and resolution

- It has to have at least three characters in it

5. The animated wolves. If they looked fake on the big screen, we can’t imagine how horrible they’ll be on our 27″ screens on DVD.

4. Jacob threatening little Alice with this line: “Things are about to get ugly.” We commend Ashley Greene for maintaining her composure and hope for a bloopers reel on the DVD.

3. While we thought the movie lacked some serious steaminess from our favorite star-crossed lovers Bella and Edward, their grunt-filled, restrained kiss on her birthday was the worst. Vampires don’t have souls; can’t we take away their ability to slurp and moan, too?

2. Jacob’s birthday gift to Bella: a mother-effing dreamcatcher. It’s no wonder she later tells him, “it was always him [Edward].” A real man doesn’t shop at Spencer’s Gifts, Jake!

1. Jacob whispering some inaudible Quileute sweet nothings into Bella’s ear just before his #5,792 attempt to lock lips. As if that was going to make her forget someone as dazzling as Mr. Cullen?

AuroraClan- Clan formed when the four clans, ThunderClan, WindClan, RiverClan, and ShadowClan, were told to migrate up north. Once there, the leaders resolved to combine their clans into one to make it easier to manage. It was named for the northern lights the cats saw there.

Solarclan- A group formed of rouges and loners who settled near AuroraClan. They usually have bright, spotted pelts and are very bulky and and tempermental.

LunarClan- Clan appeared when the moon disappeared seasons ago. Their true pelt colors can only be seen in the moonlight. They are very reclusive and keep to themselves. It is rare to see a LunarClan cat in daylight. They are usually slender and long-legged.

BlizzardClan- Clan taught the way of the warrior clans by a group of AuroraClan apprentices. Many cats are heavyset, it is rare for there to be a lithe cat in BlizzardClan. They usually have white or gray pelts.

Warning!: I own these clans and if you steal the names or ideas of these clans (you know who you are) I will report you.