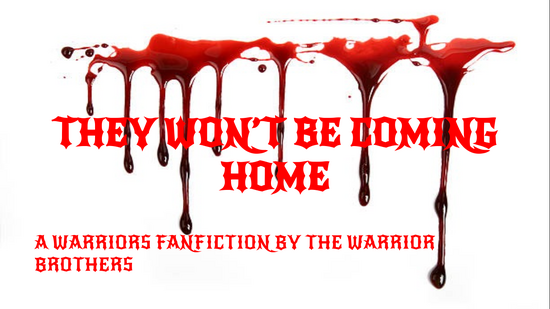 WAR RAGES ACROSS THE CLANS

NightClan and RockClan are locked in a fierce war. One that has lasted for moons upon moons. Ivypaw is a RockClan apprentice who will be going to war within the moon. Will she be able to cope with the brutal reality of battle? Or will she be killed along with many of her Clanmates?

The following story is rated Extreme.

I pad through the sparse bushes of RockClan territory, bouncing up and down with excitement. My first day out at war was coming. I'll beat those NightClan cats into dust!

I practiced a few of the battle moves my father taught me. He told me not to be so excited about the war. But don't all adults say that? I mean, how bad can it be, fighting for your Clan?

I hear voices up ahead. My squad? I guess, running towards them. I burst out of the bushes to find five cats standing there.

One is an old, battered tom with a twisted claw. At first I guess that he's one of the elders, telling an absurd tale about some stupid thing that probably never happened. Then I see the fierce gleam in his amber eyes, and the bloodstains on his teeth. I shudder.

"Hello," he meows in a voice like claws scraping over rock. "My name is Tigerstrike."

I nod quickly. "Are you my Sergeant?" I ask, looking around at the younger cats.

"Yes," he answers, dragging out the "s" so that he sounds like a viper.

"Hello," says another. A brown she-cat. "My name's Sandfeather."

I nod. This one seems friendly.

Surprise flashes through his eyes. I expect a response about how I must be a good fighter if I'm only six moons, but he just says, "I hope you're up to the task. My name is Snaketwist."

Another cat steps up, older than me but not nearly as old as Tigerstrike. "Hello," he says, "I'm Hawkclaw."

The final cat steps forward, about my age. "Hi," he mews, sounding friendlier than the others. "I'm Firefur. Seven moons. I just got my warrior name. This is my first time going out to war too."

With that, he steps back so that Tigerstrike can come forward. "Tomorrow we're going to the border with NightClan. Welcome to Squad Six."

II - To The Border

Sandfeather shows me to my sleeping area: a pile of sticks and some moss. I settle down on it, feeling the brown sticks jab me in the side. Can't they get anything more comfortable than this?

The others settle down, looking grim. For SpiritClan's sake, why are they so grumpy? It's just a border assignment! I wanted to kill Bloodfall, the General of NightClan! I fall asleep, dreaming of things to come.

Sleep didn't come easily that night. The sticks kept waking me, and I'm bleary-eyed as I stumble out of the camp. "Come on," snarls Tigerstrike, who's outside. "Do you want to miss your first mission?"

I grumble under my breath. We walk through the forest, feeling the breeze on our pelts. I enjoy the sharp wind buffeting my fur, rumpling it and blowing through it. Firefur pads over to me. "It's cold!" he says, looking out into the forest.

"Shut up!" yells Tigerstrike from the front of the squad. "Do you want NightClan to catch you yelping about how poor little you is cold? What kind of death would that be?"

Firefur's eyes widen at the Sergeant's words. "No sir," he answers.

"I said shut up!" Tigerstrike rounds on Firefur, and his paw hooks Firefur's out from under him. He raises his wickedly curved claw into the air. "I refuse to be caught," he hissed more quietly in Firefur's face. Then the Sergeant got to his paws.

There's a wild aggression and bloodlust in his eyes that terrifies me. He seems to be hungry for battle, yet at the same time wary of it.

We reach the border and look around. The forest sways in the breeze all around us. It feels so peaceful. So calm.

And then I hear the thrumming of pawsteps on the earth, the snarls of NightClan cats, and the sound of claws being unsheathed.

III - Battle On The Border

Tigerstrike and Snaketwist charge forward immediately, and Hawkclaw follows soon after. Three squads of NightClan cats are approaching over a hill.

"Thirty of them against six of us?" I screech. I start to pelt away, but jaws clamp closed on my tail.

I spin around to see Sandfeather holding me back. "What are you doing?" I shriek at her, trying to pull my tail free.

"Are you deserting?" she hisses. "Fight! Follow the Sergeant!"

She hares up the hill, slashing at NightClan cats as she does so. I follow her, and slash at one of the NightClan cat's ears. The tom spins around and hits me with one paw, sending me flying into a huge tree trunk. I fall to the ground and catch a glimpse of Tigerstrike through the fray.

He digs his twisted claw into the eye of a NightClan cat. I wince as the she-cat falls to the ground, blood gushing from her eye. I turn away as Tigerstrike digs it into her back, skewering her heart and piercing her lungs.

A NightClan she-cat sees me. I get to my paws and claw at her, but she darts out of the way, trips me, and watches as I hit the ground with a thump. "You're no warrior!" she hisses scornfully. "Has RockClan begun training kits?"

I roll over onto my back, terrified, as she draws her paw up to deliver the killing blow. Then I see a shining, red claw come through her chest. Red spurts out of the she-cat's mouth, and then she collapses in a senseless heap of blood and fur. Tigerstrike is standing there. "Useless apprentice!" he hisses. "I'll deal with you later!"

He jumps back into the battle, digging his claw into a tom's neck and shoving him into a she-cat, then impaling them both with one claw each. I'm horrified by his brutal fighting, and back away. Then I see Firefur, pinned under the claws of a tom, shrieking for help. I charge forward, knocking into the tom.

He barely moves, then spins around, catching me in the side with one paw and knocking the wind out of me. While I'm staggering, about to fall, he rears up on his hind paws and brings them down on my spine. I land on the ground, my muzzle in the dirt, my back under his paws.

And then I hear a crack that seems to echo through the whole forest. I look up, and the tom's neck is grasped in my Sergeant's jaws. Tigerstrike drops the tom and fixes the body with a stare that suggests he wished he would have killed him more slowly. Then he glares at me. "Get up," he says, so slowly and so menacingly that I fear for my own life.

Tigerstrike snarls in my face. "Swipe at me, kit!"

I do, but he bats me aside and into a rock in the clearing. "Do you think you're going to win a battle like that?" he hisses, hooking my paws out from under me as I try to get up.

His twisted claw glints in the moonlight. I stare up at it, panic flaring in my chest, and roll away just in time to avoid being stabbed in the shoulder. His amber eyes are kindling with the fire of battle as he whips his head around and clamps his jaws on my hind leg. I screech in pain, but, despite my writhing, can't escape.

He slides his teeth down my leg, gouging a bleeding hole in them as he rips out tufts of fur along with skin. When his jaws reach my ankle, I feel his teeth hit a tendon. I shriek, but he doesn't let go. He picks me up, twisting his neck so that he can hold me in midair by my leg. Then he slams my muzzle into the mud and sinks his claws into my back, dropping my leg so that it thumps against the ground.

"You have a lot to learn," he growls. He pads away, his paws squelching in the bloodstained, soaked grass.

I try to rise to my paws, but I can't. I'm just laying there, in more pain than I've ever been in, trying to catch some sleep before the next day of torturous training with Tigerstrike.

In the morning, I get up to find my body sore and aching, and I can barely move. I limp out of the muddy clearing to find everyone else awake, standing as if they were carved out of stone. Tigerstrike was at the front of the squad.

Tigerstrike snarled, turning away, and hissed, "This is absurd."

"What?" I ask when I see the horrified expressions of my squad.

I'm terrified. The last battle I fought in against NightClan, I almost died.

Snaketwist isn't done. "In 48 hours, we need to be out of there -- and have killed the General."

Retrieved from "https://warriorsfanfic.fandom.com/wiki/They_Won%27t_Be_Coming_Home?oldid=386538"
Community content is available under CC-BY-SA unless otherwise noted.