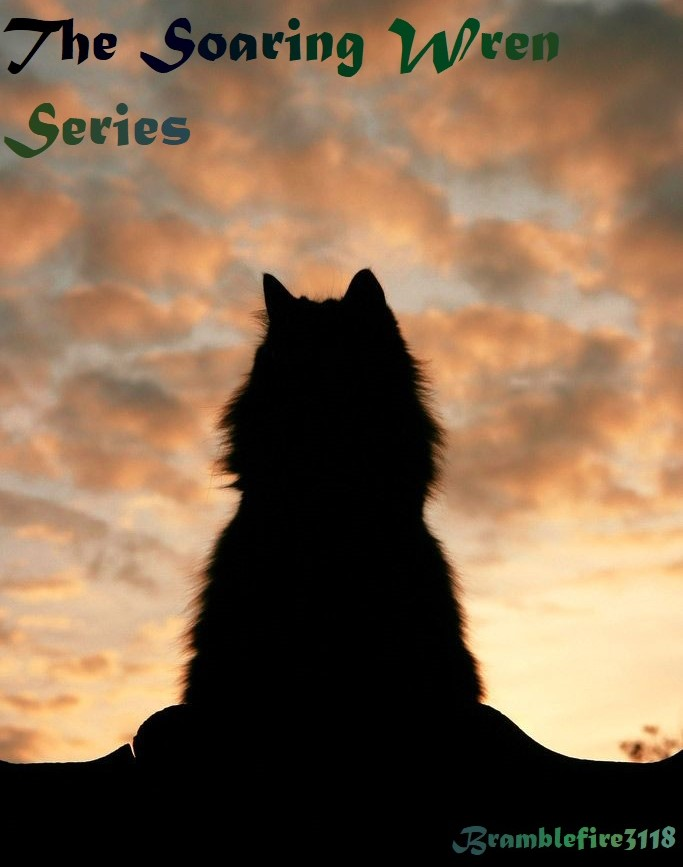 The Soaring Wren Series is a series by Bramblefire3118, also known as Brams. This page contains details about the series, links to the books, and yeah :P.

There are spoiler alerts on this page. So yeah... be warned c;

All commets are appreciated ^^ and thanks for reading haha

Arc Synopsis: WillowClan has lived in peace for many moons, after the willows fell in their old territory which forced them to leave. Since then, they have lived in peace - but now some of it will vanish.

Soaringstar, leader of WillowClan, has received a prophecy: one that tells him of a cat that will change his path. Four signs have been predicted - and he has no idea who it could be.

Meanwhile, a careless mistake brings a rogue kit to the Clan - and soon the Clan is about to change.

1. Wren's Flight - Abandoned on accident, running to get out of WillowClan territory, Wren is left alone. The Clan leader, Soaringstar, takes her back to camp, where she is renamed Wrenkit. Soon, Wrenkit's thoughts of her true past vanish, while her parents long to see her again.

Bramble suffers the issues of losing her kit, and tragedy that she should have checked if all her kits are there. But she still has to look after her other kits, and be alongside her mate.

WillowClan's leader, Soaringstar, also faces a prophecy, and he is unsure when the four signs of the prophecy will be fulfilled.

Dew, Wrenpaw's littermate, knew immediately that Wrenpaw was his littermate. But should he tell her - or keep it a secret?

Suspicious about Wrenpaw's rogue past, Soaringstar has taken on the role of mentoring the young she-cat. Will he see a Clanborn cat inside her - or a rogue one?

Outside of the Clan, Bramble is grieving. Now she has lost two of her kits, and she needs to protect the third as well. Will the burden of losing her kits collapse on her?

3. Wren's Wing - Wrenfeather is now a warrior, yet she has her eyes on a cat. Does she have the strength - as well as he - to say that she likes him?

Dewfrost is now a warrior alongside her - but soon a cat will approach him, and his secret will be shared by another...

Soaringstar now has less to do - but the prophecy is still in his mind as he leads the Clan. Should he console in someone - or endure it for longer - like he has done for countless moons already?

Life has returned to what it was before Bramble had her kits - but she is grief-stricken. Now what should she do - endure, or return to where her kits left her?

Their lives will all intertwine, and soon a cat will reveal a secret that will surprise a cat - one whose belief about everything will be shattered.

4. Wren's Feather - All seems lost for Wrenfeather. After a shocking truth was revealed to her, she is blinded by pain. Now she needs to find who her true parents are - but where, and who?

Dewfrost has sensed her misery, and now, as their scents appear back in the willows, he has to find them.

Bramble and Rock have returned to the willows, but their kits are closer to them than they think they are.

Soaringstar has to push his Clan past all this. But the rogues that attacked last newleaf are back - and Soaringstar will need to gain more strength - and maybe some more warriors - to keep WillowClan among the willows for seasons unknown.

(these are roughly listed in chronological order from starting point.)

A Shaded Heart - A long-awaited prequel to the Soaring Wren series, this shows a small portion of what Soaringstar had to do before his life as the legendary WillowClan leader seen in The Soaring Wren Series.

Soaringkit always wanted to do the best for his Clan - and have a mate and kits, too. Ever since he was born, he knew he liked the mysterious - and popular - Flowerkit. However much the young cat loves her, she doesn't love him back. And when tragedy befalls, Soaringkit makes a promise that he vows not to break... but did it work? (Timeline: Before Wren's Flight)

Love Love Love - Soaringstar had an interesting love life in A Shaded Heart. This is his story, in a songfic form... OA is Avalanche City. (Timeline: Before Wren's Flight to end of first arc, however there are arc 2 spoilers so be warned)

Amber Spirits - Amberspirit. A she-cat in WillowClan who knew things no other cat knew - but she was too shy to speak up about it. An untimely death she had, and so many troubles befitted her short life. Now, Amberspirit's story is revisited, and the young she-cat will show you everything she suffered in life. (Timeline: Before Wren's Flight to about the middle of Wren's song (when *spoilers* Amberspirit dies))

Rosefall's Secret - Rosefall adopted Wrenkit as her own - to protect her. But she wants to let it known.

Time and time again, Rosefall is on the brink. She wants to reveal it, but she can't. She doesn't want her to know.

When should Rosefall reveal her secret - now, or later? (Timeline: Middle of Wren's Flight to the end of Wren's Wing)

They're Not Gone - Adder had always believed that his two littermates were still alive - even when they had gone for moons. After an argument, he flees to find them. But when Adder finds his brother, he's in no way that Adder expected. Should he keep his new life - or go with him, when his brother knows the fate of his sister? (Timeline: End of Wren's Song to Chapter Four of Wren's Wing)

Soaring Wren - A poem portraying the all-important shipping in the series, also known as SoaringXWren. <3 (Timeline: Wren's Feather, roughly, but has spoilers for A Shaded Heart too c;)

Second Arc: Return to the Clans

Arc Synopsis: It has been twelve moons since the end of a prophecy that changed WillowClan's path. The leadership of the Clan has changed - and two young apprentices are now in the spotlight of saving their Clan.

The willows are falling, and the cats of WillowClan are starving. Soon they will be pushed to the limits, and they will have to flee.

While WillowClan deals with the falling willows, an apprentice of CloudClan - one of the Clans WillowClan left behind many moons ago - will learn of the group coming to them. Will the five Clans accept that there will be five once again?

1. Falling Willows - Newleaf has returned to the forest. WillowClan is thriving. And two kits are about to become apprentices of WillowClan - and these two sisters have more to do than they have ever dreamed.

Soon, Twolegs come, and start to chop down the willows. Hollypaw and Soarpaw have to help Wrenstar - their Clan leader, and their mother - to help WillowClan to survive.

Where the other four Clans reside, Leafpaw, the medicine cat apprentice of CloudClan, has received an omen. Cats yowling, fleeing, and a group of cats at the Gathering. What should she do, to prepare for the upcoming arrival?

2. The Departure - The WillowClan camp has been destroyed. The cats of WillowClan have set a date to leave. But even the prospect of leaving doesn't come without fear.

The deaths of three Clanmates have just made the Clan weaker, and even Wrenstar is struggling under the burden. Can the Clan pull the strength together to get through, and to depart as one - to what could be their new home?

Meanwhile, the omens are increasing for Leafpaw. Can she forsee what is happening to the fifth Clan - and what's going on - before it's too late?

Allegiances for The Departure

3. Finding Four - The WillowClan cats have finally left their home to find a new place to live. Doubts are already known in the Clan. The direction of where they are going is unsure to most - none, it seems, except for two Clan apprentices - Hollypaw and Soarpaw.

The Clan is doubting the two apprentices' abilities - especially because they're only a moon into training. Can Hollypaw and Soarpaw prove them wrong, as the race to find the four other Clans begins?

Meanwhile, in CloudClan, Leafpaw knows that the WillowClan cats are coming. She is the only cat who can guess when they will arrive... and when they do, her Clan needs to be ready for their next challenge.

4. Returning Willows - It's hard for the four Clans to accept that it's really five of them now: and WillowClan needs to adapt to having rivals. However, there are greater priorities for the fifth Clan: and that is to set up a home. However, it's hard to find a good place.

With the help of one of their new neighbors, WillowClan might just have the strength that they need. And maybe, soon, WillowClan can gain back the peace they once had when the willows started to fall.

NOTE: Please do not add fanart that you have made for The Soaring Wren Series straight over here! If you want to submit some fanart, please submit it to Brams' talkpage first. Thank you in advance c:

Art made by Whitey! This is our furry friend Soaringstar! He's so beautiful!! <33333 (Thanks Whitey! :D)

(Hollypaw: HaHa! Got ya!) This is from Shark - it depicits Hollypaw and Soarpaw, from the second arc of the series! :3 Thank you, Shark, for this!
Add a photo to this gallery
Retrieved from "https://warriorsfanfic.fandom.com/wiki/The_Soaring_Wren_Series?oldid=347246"
Community content is available under CC-BY-SA unless otherwise noted.