Two siblings, inseparable as kits, Briarwing and Moonfrost, face challenges only imaginable in the craziest dreams, and face decisions that could either save the clans or destroy them.

Two who share blood, one with the shadows and one with the light, will save the clans and destroy them with all their might. The only one to save them all and make wrong things right is one who isn't afraid to adventure into the night.

Stars glittered on the Moonpool’s surface, casting a luminous and ever so beautiful light on the green glasslands surrounding it. Echocry, a beautiful grey she-cat with glorious teal eyes, was here to receive her nine lives and become leader of ShadowClan, Echostar.

She shivered, her anxiety rising as questions filled her mind: What if I don’t get my nine lives? What if the Moonpool doesn’t work… What if….. Echocry thought, mind racing and her eyes sweeping over the luminous Moonpool. Frostfang, the old and wise medicine cat, whispered from behind her amongst the shadows, “Don’t be afraid.” Echocry nodded as he went on.

“I’ve done this twice before now. With Maplestar and Reedstar.” he rasped. “Everything will be fine.” Echocry nodded, eyes showing the smallest glimmer of hope amongst the swallowing darkness of fear and uncertainty. She nodded and hesitantly crouched, delicately touching the Moonpool’s starry surface with her pink nose.

“Wha..? I-I.. Is this StarClan?” She murmured, genuinely surprised. The land she were sent to was dark, gloomy, and murky. Nothing like the grey she-cat expected. She picked up a single front paw and turned it over.

It had murky dirt all over it, and was wet with rain from horrible storms. She flinched as she heard a yowl of a mysterious cat, who looked to be older than any elder than she’d seen. “Fight! Go for the neck! Snowtuft, can you do anything right!? Yellowfern, I told you to STOP! Go for the neck, be ruthless! We will take out the clans once and for all!” Echocry’s eyes widened with fear as she heard another yowl. A familiar one.

“Ugh, One Eye, you say you know how to take out those petty clans, but can we really do it when we train like cowards?” Echocry stared at the cat who said that. She was a glorious blue and white she-cat, and was unmistakably Rainkit, a kit in the nursery. But much, much older here.

Why was that? This must be a dream. The moonpool must not have worked…. This is a regular dream, no, a nightmare. But regular. This happens all the time! Right? She thought, trying to make an explanation for herself to hide her shock. She turned to see and hear more but quickly after she got a glimpse of a light brown she-cat with rose colored eyes, staring at her with interest, Echocry felt agony and pain, like sharp claws piercing her neck as darkness finally engulfed her.

Echocry gasped as she woke, and she shivered. She looked around, and seven starry cats looked at her, confused. Don’t they remember the life given to me by Darktail? She wondered. She was about to ask when the starry cats, now joined by others of Starclan, started to cheer her new name. “Echostar! Echostar! Echostar!” they cheered. Echostar wanted to ask them about Darktail, but she was woken up by a sound and jolted awake. She looked down at the moonpool and breathed. “That was beautiful. But-but DARKTAIL was there. Darktail! Is that normal? Should I be worried?” she looked towards Frostfang, the medicine cat who would know the answers to her many questions, and gasped. She looked at the limp, white body, and the clouded blue eyes beside her. She touched the red, soaked stones slightly and pulled away. She knew someone was missing at her naming ceremony. She knew someone wasn’t cheering her name when they should have been. And now she knew who and why. Frostfang hadn’t been there.

Because Frostfang was dead.

Briarkit stumbled from the nursery, blinking sleep from her rose colored eyes. She shook her light brown pelt and yawned. She spotted Moonkit, her sister, Starlingkit, Sparrowkit, and Thrushkit, the newer kits, playing. She tumbled along, wanting to play as well. She toddled along, almost tripping on a branch poking it's face out of the brown, moist dirt that was still wet from last night's rain. She looked down at the pine-needle dotted dirt below her and thought to herself, /I wonder what they're playing.../ she stumbled along again, and approached the four kits, smiling widely. "Heyya! Can I play?" Moonkit hesitantly stood forward. "Sorry sis, it's a four-player game, and we're in the middle of it. Sorry!" she mewed. Briarkit hung her head. "Okay then, I'll go and listen to Ashpaw and Heatherpaw and Yarrowpaw! They said they'd show me some real life Shadowclan Warrior moves when they get back!" she meowed. Moonkit nodded. "See ya, Briarkit!" she called out to Briarkit, who was scampering away towards the apprentices who were dropping their prey in the well stocked prey pile. Ashpaw was bragging about their Warrior Ceremony, rumor had it, that it would be today, as he dropped his rabbit in the prey pile. "Windclan never saw us coming! We took OUR rabbit and they left, beaten!" he bragged as Yarrowpaw dropped her squirrel and Heatherpaw added in her shrews. "I still can't believe those Windclan mange-pelts thought they could cross onto OUR territory and accuse us of stealing their lousy prey and get away with it!" Briarkit tilted her head. Had there been a border skirmish? As she studied Ashpaw, the fight wasn't nearly as easy as he had declared. He had blood matting his pelt, and a chunk of his ear was noticeably missing. He winced as he stepped forward. "Oh, hey Briarkit!" he chirped. "Wanna see those Warrior moves I promised?" Briarkit nodded. But before he could show her, the newer leader of the clan, Echostar, stepped forward. "Cats of the clans! Windclan is at it again! They have attacked and beaten our patrol." Ashpaw winced. Had Ashpaw /lied/? 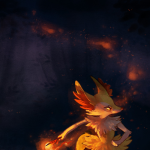