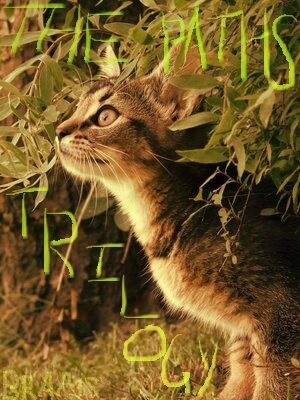 This is the main page for The Paths Trilogy, a trilogy written by Brams.

It centers on a she-cat named Brokenpath, whose life has been in turmoil ever since before she was born. But after her warrior ceremony, everything takes a turn for the worst - or so it seems, for the young Brokenpath.

Little does she know that this could've been the best choice someone made for her in her own life...

Book 1: Broken Paths (Complete) - Brokenpaw had always had a shattered life. She'd never really known who she was - her parents she had never met, although she was Clanborn. However, her loyalty to her Clan is something that never dies.

After training with the apprentices for six moons, Brokenpaw, like all apprentices, chooses her warrior name. But that price cost Brokenpaw dearly.

Instead of returning to her birth Clan, PebbleClan, the newly named Brokenpath is shoved into GrassClan, much to her dislike. The young she-cat has to develop friendships in her new Clan. But when a rift forms, Brokenpath has to fight for her right to be in either Clan. Will Brokenpath make the decision to be in her Clan by birth, or the Clan she was forced to join?

Book 2: Merging Paths (Complete) - All everything that Brokenpath knew about her family was a lie. Her father was never dead.

Brokenpath now knows a reason behind her placement in GrassClan. But getting Bluepelt to return there is an issue - he's torn between his GrassClan roots and his PebbleClan allegiance.

With the help of Dustyheart, Cloudspirit, and Goldenflight, can Brokenpath convince her father to join their side, as a rift with PebbleClan increases, and a war looming with them on the horizon?

Book 3: Darkened Paths (In Progress) - GrassClan and PebbleClan are now at war, and the cats that GrassClan has claimed to have stolen from them - Bluepelt and his daughter, Brokenpath - are at the center of it all.

As the battle looms, the five GrassClan outsiders that have all come someplace else before GrassClan hear of an ominous message, they have to work to solve it ahead of time. However, that doesn't always go to plan...

And when the battle does come, sacrifices are made to keep the peace, and to finally solve the issues between PebbleClan and GrassClan forever.

The Main Characters - Before The Path was Broken

Each of the five main characters in The Paths Trilogy has a story to tell, before the day when Brokenpath shifted Clans. Read their stories, and share the experiences they had to go through...

Bluepelt - Outside The Borders - Bluepelt had always not been the best warrior in PebbleClan - because he had the dislike to fight. He didn't want to become a medicine cat, so being a warrior was all he could be. But when he is attacked alone, and narrowly flees, Bluepelt must forge up his own life outside the borders - and abandon all he has ever known.

Brokenpath - Orphaned - Brokenkit was born, but her mother and three littermates all died. She was the only survivor - but her father is dead as well. After becoming an apprentice, young Brokenpaw must learn that being loyal to the group isn't necessarily the right thing to do - it's being loyal to yourself.

Dustyheart - Calling of the Grass - Dusty lives a good life in the valley, and she's sure she can't live anywhere else. But when she receives a sign that she is required elsewhere, she must move towards a place which she has never been before, leaving her life behind her. With her kits, she has to find the Clans...

Goldenflight - Fallen Loyalties - Goldenflight was always a loyal FallClan warrior - always. She was the one that could be trusted. But when her biggest enemy in the Clan blames her on helping StreamClan in the middle of war between the two Clans, Goldenflight is forced out. Her loyalties are gone and shattered, and there's nothing left to do, but to forge new ones instead.

Retrieved from "https://warriorsfanfic.fandom.com/wiki/The_Paths_Trilogy?oldid=340121"
Community content is available under CC-BY-SA unless otherwise noted.