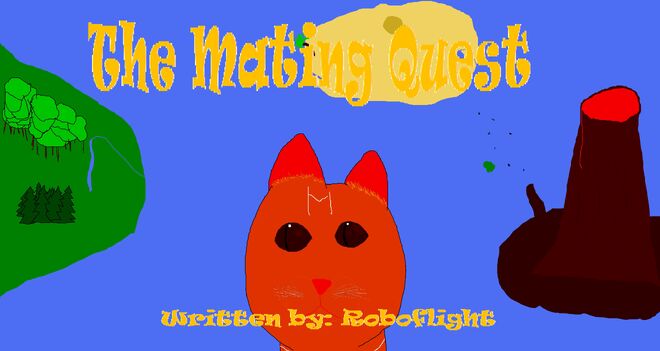 In the three clans; Mountainclan, Cloudclan and Oceanclan, when you become a warrior, you embark on a journey with a pack of nine other cats called The Mating Quest. On this quest cats will be tested to see if they truly are worthy of becoming a warrior, they will gain experience and they will choose a mate, and if to have one.

When Roboflight, from Mountainclan, and her pack are sent on the most dangerous and challenging Mating Quest yet, racing against the packs of the other clans for victory, they will have to rely on every skill they have, and they must learn to put their differences aside and work together...

It is finally Roboflight's turn to begin her mating quest, but her pack will soon discover that they were not asigned on just any Mating Quest. Theirs will require them to use the skills they never had, and as they set out on their journey, the cats will begin to doubt how much trust they can place in each other

Roboflight and her pack have managed to cross the hostile forest, but not without loss. Now they must swim across the ocean, using all of their strength, to make it to an island, where dangers await. However, the cats are having problems from the inside as well as the outside, as tensions rise within the group

Now on the island the cats must decide, where to take their quest, as they face threats from the residents of the island, the other packs and from within the group. Making the desicion to turn around or continue will require them to summon all of their loyalty to the clan, and make a final desicion.

The pack continue their journey, as they reach the volcano. But the journey into it will be dark, and dangerous, as the three packs compete, to claim their prize. But the volcano hosts more surprises than expected as Roboflight will be forced to make a decision that will make the difference between victory and honor.

The packs must face all of the challenges once again, as they begin racing back home, to earn the prize as winner of The Mating Quest. But the return brings time to reflect on the journey, as the cats finally begin to appreciate and understand what the quest was really about.

This was done by Feather, as a songfic for that series and SHE DID SUCH A GOOD JOB! *huggles Feather to death* Anyways, it is amazing and Feather did amazing. The song fits this series perfectly.

This is a special of Tidalpelt's journey and his tale of the Mating Quest as well as the struggles he faced, the choices he made and his pack's mating quest. Adopted by Rainy.

This is Inkpelt's story of how he felt after he chose Petalfall over Driftingcloud and his process of getting over the she-cat.

Retrieved from "https://warriorsfanfic.fandom.com/wiki/The_Mating_Quest?oldid=239343"
Community content is available under CC-BY-SA unless otherwise noted.