This is a series of books written by me, Mistysun. 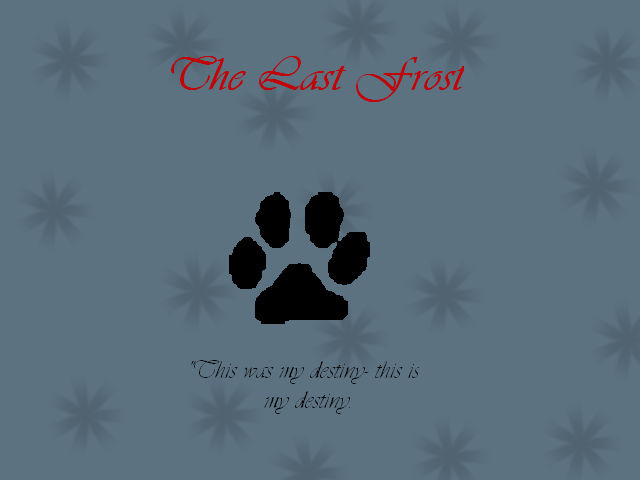 Out in the World Alone

The Last Frost/Characters - Learn all about all the characters in the The Last Frost. Get inside info about them, see pics of them, and more!

The Last Frost/Mini Stories - Three different mini storys/spin off storys feauturing characters and places from The Last Frost. Learn character's past and true feelings, and what made them who they are now, as well as some history on the story.

The Last Frost/Extra Info - Ever wanted to know why Frogpaw and Mistpaw used to get along so well? Or who Scar's group really is? Read about this along with trilloins of other facts about The Last Frost Series.

Blurb for The Last Frost: When Mistpaw becomes an apprentice, she knows she won't be one for long. Because soon she sets upon a journey- one that will change her life for ever- as she tries to uncover who she really is and Mosstail's secret. But she never knew how hard it was actually going to be...

This is all the artwork having to do with The Last Frost series. It's mostly Characters

Thx to Evningswift, TPL, Treestar and Aqua for making these pictures. If you want to make artwork for The Last Frost, feel free!!!

1 of 6
Add photo
Retrieved from "https://warriorsfanfic.fandom.com/wiki/The_Last_Frost_(Series)?oldid=73843"
Community content is available under CC-BY-SA unless otherwise noted.