The Clans are fighting. Half-Clan cats are rising in numbers while "pure" families are decreasing rapidly. Blood is rising believing they will "cleanse" the Clans' bloodline. With help on the inside, will we fight together or will our loyalties divide us?

The Army Series: The Beginning: Rainheart becomes a warrior and realizes what she will have to do. She has a season to prepare before she has to join the ranks of the Warriors Military. She realizes what fun can be with her best friends by her side. But only for a season...

The Army Series: The Drafting: Rainheart has waited her season. Now she has to see if she will the first of her friends to be drafted into the military. If she does, who knows what horrors await her.

The Army Series: The Twolegplace: Rainheart has gotten into her squad and most of her friends are in the same squad. She has taken more of a liking to one of them in particular but still has yet to finish boot camp. After that they have been assured that they will be on the front line. Will Rainheart choose to follow her heart or her loyalty?

1: Defend your Clan, even with your life. You may have friendships with cats from other Clans, but your loyalty must remain to your Clan, as one day you may meet them in battle.

2: Do not hunt or trespass on another Clan's territory.

3: Elders, queens, and kits must be fed before apprentices and warriors.

4: Unless they have permission, apprentices may not eat until they have hunted to feed the elders. If any warrior or apprentice is sick or injured, they may eat while the elders, queens, and kits are eating.

5: Prey is killed only to be eaten. Give thanks to StarClan for its life.

6: A kit must be at least six moons old to become an apprentice.

7: Newly appointed warriors will keep a silent vigil for one night after receiving their warrior name.

8: A cat cannot be made deputy without having mentored at least one apprentice.

9: The deputy will become Clan leader when the leader dies, retires or is exiled.

10: After the death or retirement of the deputy, the new deputy must be chosen before moonhigh.

11: A Gathering of all four Clans is held at the full moon during a truce that lasts for the night. There shall be no fighting among Clans at this time.

12: Boundaries must be checked and marked daily. Challenge all trespassing cats.

13: No warrior can neglect a kit in pain or danger, even if the kit is from a different Clan.

14: The word of the Clan leader is the warrior code.

15: An honorable warrior does not need to kill other cats to win his/her battles, unless they are outside the warrior code or if it is necessary for self-defense.

16: A warrior rejects the soft life of a kittypet.

17: A medicine cat can have a mate and kits if they have a fully trained apprentice that can take over for them.

18: A cat may have a mate in another clan but must stay loyal to their clan.

19: In times of great danger, the Clans can unite to fight the danger. 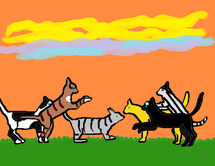 The Battle in Chapter 2 Book 1 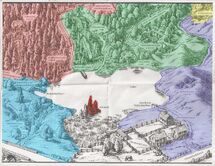 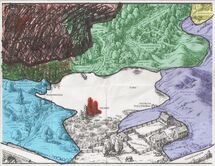 My fanfic's Lake Territory
Add a photo to this gallery

Where is ShadowClan??: ShadowClan's territory is now used as the HOA because after the battle with the Dark Forest, ShadowClan decided that StarClan had not meant for the lake to be their new home because none of StarClan came to help ShadowClan in the fight even though every other clan had StarClan fighters so ShadowClan left and headed for the mountains. Some ShadowClan cats decided to stay with the clans and dispersed themselves to the other clans.

What is the HOA?: The HOA is where all cats can hang out and see their mates from other clans as well as their kits. Having mates is not forbidden but makes life harder because some cats hate that is is allowed and can and will kill to prove it.

Add other questions here in bold for an explanation from me!

Retrieved from "https://warriorsfanfic.fandom.com/wiki/The_Army_Series?oldid=146231"
Community content is available under CC-BY-SA unless otherwise noted.