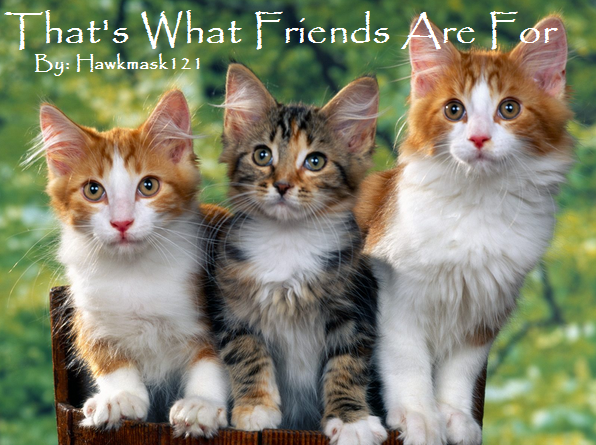 This is a songfic to Taylor Swift's song, "Mean." It's about how Ravenpaw feels when he escaped from the forest to get away from Tigerclaw. Written by Hawky. Song belongs to Taylor Swift.

and weapons that you use against me.

Ravenpaw pelted through the undergrowth, fear bubbling in his chest.

He was running away.

From his Clan, his friends, his life.

Have knocked me off my feet again,

A dark tabby shape followed him, shadows swivelled around his paws. He was an evil cat, and hatred burned in his yellow eyes.

"Leave me alone, Tigerclaw!" Ravenpaw called back to him, still running.

Evil whispers answered him, and the evil cat still followed him. Rain poured down, making the darkness that followed him even scarier than it already was.

calling me out when I'm wounded.

"You will pay for what you have done!" Tigerclaw's deep voice made Ravenpaw's ears ache. His muscles burned, and he slipped and fell in a patch of mud.

Tigerclaw and his followers of darkness were closing in on the apprentice. Ravenpaw wanted to get up.

He knew he would never be able to beat this cat and his followers. He had told Firepaw about the murderer Tigerclaw was. He had murdered Redtail in cold blood, hoping to become deputy, but Bluestar had replaced him with Lionheart.

Pickin' on the weaker man.

"I could have been the deputy!" he roared, lifting his paw to swipe the tiny tom.

As the fearsome tom lunged for his throat, claws extended, a flame-colored flash bowled the huge tom over. The darkness around him scattered.

You can take me down,

with just one single blow.

But you don't know,

what you don't know.

"Firepaw!" he screeched in relief, then he saw a gray splash of fur at the ginger toms side, "Graypaw!"

Ravenpaw leaped to his paws, new energy rushing through him. He fluffed out his fur to make himself look twice his size. He bared his teeth, hissing at Tigerclaw, while his friends took their places beside him.

Tigerclaw looked up in alarm, a fresh wound on his shoulder.

Living in a big ol' city,

and all you're, ever going to be is mean.

"You diseased maniac!" Firepaw spat, "Why would anycat want to make you deputy?"

A growl rumbled in Graypaw's throat, "You murderer!"

Then all three chorused, "Betrayer!"

Big enough do you can't hit me.

Tigerclaw let out a snarl and thrashed out at Ravenpaw. He quickly dodged the blow, and Graypaw leaped, slashing a wound down Tigerclaw's flank.

The huge tom yowled in pain, then lunged for Firepaw's throat. Firepaw braced himself, squinting.

"No!" Graypaw lunged for Tigerclaw's scruff, and pulled him back. Ravenpaw heard the sickening tear of skin between teeth.

ever going to be is mean.

Tigerclaw ripped free of the apprentice's grasp, blood trickling down his neck. He let out a fearsome bellow, "I would have led the Clan better than Bluestar!" he turned his gaze to Ravenpaw, "If it weren't for you!"

"I just want to protect the Clan from you treacherous mistakes!" Ravenpaw countered.

Tigerclaw let out a sarcastic laugh, "My treacherous mistakes?" he leaped at Ravenpaw, pinning him down in the mud, "This is your fault!"

With your switchin' sides,

and your wildfire lies,

Firepaw and Graypaw leaped at Tigerclaw, clawing fur from his sides. "We aren't disloyal like you, Tigerclaw!" Graypaw yowled.

Tigerclaw turned on Graypaw and swiped his muzzle, sending the apprentice reeling. He fell to his side, blood trickling from his nose.

"No!" Firepaw raced to his friend's side.

Have pointed out my flaws again,

as if I don't already see them.

Ravenpaw jumped on top of Tigerclaw, digging in his claws to hold on. Tigerclaw bucked and hopped, trying to know the black cat off his back.

Graypaw was rushed into a bramble patch, Firepaw at his side. Furious, Firepaw lunged for Tigerclaw's throat. The huge tom dodged easily, grabbing Firepaw's tail in his jaws. The ginger apprentice yowled in pain.

Ravenpaw was thrown off the huge warrior's back, slamming into a tree trunk. Dizziness swirled in his mind.

I walk with my head down,

Tryin' to block you out

'cause I'll never impress you.

Graypaw bounded out the brambles, dried blood crusted around his nostril. His nostrils flared and a deep hiss came from his jaws. He bowled into the huge tom, sending his reeling into a puddle. Graypaw thrashed and scored blows on Tigerclaw, blood pulsing from a wound in his side.

"You can't beat us!" Firepaw joined in the battle.

I bet you got pushed around,

somebody made you cold.

But the cycle ends right now,

"Why not, puny apprentice?" Tigerclaw taunted, exhaustion edging his mew.

Ravenpaw stood, his fur fluffed out and his back in a high arch. He let out a hiss, "Because friendship is more important than power."

He attacked Tigerclaw, thrashing and raking his claws through Tigerclaw's fur.

'Cause you can't lead me down that road,

and you don't know,

what you don't know.

The three friends moved as one, matching blow for blow. Tigerclaw ripped free of their claws and fled into the forest, yowling.

Then, he stopped, turned, and hissed, "You better watch your tail, Ravenpaw, because I'll still be around," then continued running.

"We did it!" Graypaw meowed triumphantly "We beat Tigerclaw!"

living in a bog ol' city.

ever gonna be is mean.

A rustling in the shadows set Firepaw off guard. He whirled around to see Darkstripe by Tigerclaw's side.

"I'm not so defeat-able now, am I?" Tigerclaw taunted.

The three apprentices huddled together; fur fluffed out, eyes narrowed, and backs arched high. Thunder crackled in the sky, making the rain pour faster. It seemed that StarClan were weeping.

I can see you years from now in a bar,

talkin' over a football game,

With that same big loud opinion but,

Darkstripe lunged for Graypaw, grasping the apprentice's scruff. Graypaw struggled, clawing at the warrior's chest. Blood trickled from the bite in his scruff, he was getting weaker and weaker. . .

Ravenpaw bowled Darkstripe over, clawing at his throat. Pawfuls of fur were coming out, one by one. . .

Tigerclaw leaped into battle, grabbing his former apprentice and throwing him against another tree. Ravenpaw lay there, stunned.

Washed up and ranting

about the same old bitter things.

Ravenpaw watched as his friend went up against the two warriors. Ravenpaw was sure he would lose, that they would fail, but he got to his shaky paws. Fearlessness pulsed through his veins, while fear still gripped his belly.

Drunk and grumblin' all about how I can't sing.

But all you are is mean.

All you are is mean,

"I thought I was finished with you!" Tigerclaw growled, lunging for the tiny cat. Ravenpaw's plan was going to work! He dodged to one side, making the huge tom crash into the tree. Headfirst.

Tigerclaw lay in the roots of the tree, stunned, while the rain turned into a drizzle. The three apprentices seized Darkstripe, sending him reeling into the forest. they chased him towards Sunningrocks,  Then, with a splash, he was swept away into the river.

"Liar!" Graystripe called after him.

And alone in life, and mean,

The three raced back to the bloodstained clearing with tufts of mixed fur between their paws. Ravenpaw kept shaking his forepaws clear of the furry stuff, because he didn't want to lick it.

Or get a hairball.

They studied Tigerclaw, who looked helpless and small. His eyes were flickering, and he let out a groan of defeat.

But someday, I'll be,

living in a big ol' city,

and all you're, ever going to be is mean,

Tigerclaw slowly staggered to his paws, blood trickling out of one ear. He stared at the apprentices, horror struck, then raced away into the forest, admitting defeat.

"Coward!" Ravenpaw called after him.

big enough so you can't hit me.

And all you're ever going to be is mean.

The three friends huddled together, licking each other's wounds.

"Thaks for saving me," Ravenpaw mewed.

"You're welcome," Graypaw meowed, flicking his tail on his friend's nose playfully, "That's what friends are for."

"So, about what I said, about leaving ThunderClan," Firepaw began.

Firepaw continued hesitantly, "Do you still want to live with Barley? After we defeated Tigerclaw?"

living in a big ol' city (Why you gotta be so mean?)

And all you're ever going to be

Ravenpaw shook his head, "No. Not if Tigerclaw is still in the forest. He can always come back for me."

Firepaw looked crestfallen, "Oh. Well, be sure to come visit."

Graypaw added, "And we'll visit you."

Ravenpaw brushed his tail against their flanks, "I'll miss you guys," he meowed. Then he padded away to Fourtrees. He left his old life, and now, he would start a new one.

New friends, new places, and new skills to learn. He felt a starry pelt brush his, and looked to see his mother, Robinwing.

"StarClan will always be on your side," she mewed. Then, melted into the shadows.

big enough so you can't hit me (Why you gotta be so mean?)

And all you're ever gonna be is mean.

Retrieved from "https://warriorsfanfic.fandom.com/wiki/That%27s_What_Friends_Are_For_(Songfic)?oldid=210114"
Community content is available under CC-BY-SA unless otherwise noted.