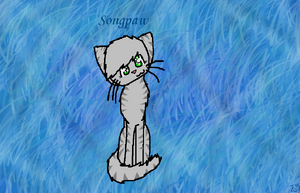 This series was originally written by Rainy, then later adopted by Brighty at Songflight's Pain.

Songflight's destiny has been marked out and set apart from the cats around her. No matter what she does, trouble dogs her pawsteps, and she realizes that WaterClan needs her and her siblings to fulfill a prophecy time and time again. Her journey involves many victorious triumphs and heartbreaking tragedies, as Songflight discovers the path StarClan has laid out for her, and, eventually, discovers herself.

Songpaw's mother was a loner who came to WaterClan for protection. Then she left, hoping her kits would have a better life here. And they have... so far.

Now a sinister cloud is building on the horizon. Can Songpaw and her siblings cope with problems in relationships, the trust of their Clanmates, and losing the cats they love? And can the quarreling Clans unite against the monster that threatens their beloved home? As Songpaw journeys through life, she learns what it truly means to be a warrior, not by blood, but by heart, and what it is to live... and die, for your Clan.

Songpaw's Loyalty Songpaw is determined to prove she is as loyal to WaterClan as any cat, but it's harder than it looks. Especially when a helpless family of kits enters the picture.

Songpaw's Secret Songpaw finally feels like a true member of WaterClan. But then she meets Bushpaw of TreeClan. How can such loving such a nice young tom be so wrong? And what is with this strange tom they call Razor? What connection does he have to her friends?

Songflight's Love Songflight is a warrior... but her secret's not gone. It's inside her. Songflight is going to have kits, and the father? Bushtail. Love, loyalty, and the right thing become swirled in Songflight's mind as she struggles to raise her kits while the Clan is in grave danger, from outsiders... and within itself.

Songflight's Destiny Songflight has raised her kits as best she can, but she finally gives up. She will always love them, but it's not her destiny to be a queen. Applewhisker is willing to take them, so why can't the other cats stop asking questions? Then, Razorfang reveals something that shakes the Clan to it's roots.

Songflight's Battle Songflight knows it's up to her, Patchbird, and Hawkswoop to stop the pack of evil cats who are wreaking havoc on the Clans. But the Clans aren't exactly friendly right now, and it's going to be very hard to unite them... even with all the lives at stake.

Razor is gone, but the ripples of his cruelty spread through Songflight's life, and the lives of her loved ones. It's been weeks since the fateful day when disaster struck, but Marshpaw's still missing. And it feels like a piece of Songflight's heart is too.

She longs for the day when her family is united, but when a new enemy approaches, threatening all the Clans, Songflight has to decide if she will continue hoping for her lost son, or turn to the future and defend her Clan.

Songflight's Discovery Songflight wants to heal, to regain her strength after fullfilling the prophecy and defeating Razorfang. But she can't ignore her kits. As much as she wants to start a new life, the past won't go away. And slowly things are falling into place for another calamity. And guess who has to stop it?

Songflight's Pain Songflight has seen her son. He's a shadow of the cat he used to be, but that doesn't matter. Yet does he want to come back? And how can she persuade him to come back with WaterClan in danger again? StarClan is counting on her again, but this time she's sure she can't do it, with all the shadows surrounding her.

Songflight's Choice The threat is building, one unlike any other the clans have faced. WaterClan needs a leader to prepare them, and Songflight realizes she has been chosen. Her heart is torn in two, one side for the clan she loves so much, the other for her lonely son. How can any cat make such a decision?

Songflight's Rage When her Clan is ripped apart, Songflight is sure it's her fault. But somehow she must find the strength to avenge her loved ones and make things right. Marshpaw is slowly fading from the clan's memory, but he burns fiercely in hers. Her anger finally comes out, and she has to find a way to control it, to do what's right, no matter what the cost.

Songflight's Peace It's finally come down to the final battle, and Songflight is ready to take her clan into war. Just one secret remains, one unanswered question that could change everything. Will it shatter her, or will WaterClan's bravest warrior find peace?

Pinestar's Courage WaterClan is desperately in need of a leader to take hold of it and steer it through some dark times. But young Pinefur doesn't ever dream of being that needed cat. Between his brother's death, a distraught mother, and a love that was never meant to be, he's got more than enough on his paws. Learn the grueling path of WaterClan's beloved leader, as he calls upon courage he never knew he had, and meets his destiny.

Everytime We Touch Bushtail may be deputy of TreeClan now, but he will never forget the silver cat that stole his heart one hazy full moon. And one particular night is a night for remembering.

Begin Again Now that her past romance with Bushtail is gone, Songflight realizes that there is more to life then she's been seeing, and Troutstream just may be the one to help her get over her old love for good.

Retrieved from "https://warriorsfanfic.fandom.com/wiki/Songflight%27s_Journey?oldid=225992"
Community content is available under CC-BY-SA unless otherwise noted.