Go here to see the characters. 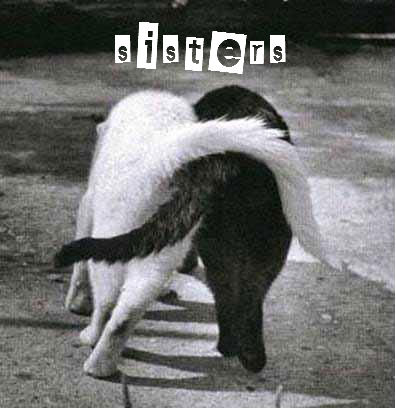 "Run! Run!" The huge white tom meowed running far behind the black queen and her two kits. Huge loud noises and sounds came from behind them. Birds could be seen flying away on the evening sky. The forest was ruled by falling and destroyed trees. The sky was gray from smoke coming from the machines.

"Flash!" The queen cried out to her mate. "The kits are exausted. Help me carry them!" she meowed desperately to him. Flash rushed back towards the queen and picked up the bigger kit carefully, making her open her tiny silver eyes. The queen nodded carried the smaller one.

Both cats now ran through the falling apart forest carrying their scared kits that were too young to understand what was happening. Both the kits faces showed only fear, but they remained quiet and didn't meow in complaint.

"Fly!! Come this way!" Flash gestured to the queen. Fly imediately nodded and kept carrying the smaller, white, she-kit as she followed Flash. They ran as fast as their paws could take them, but it was hopeless. The monsters just kept appearing behind them and trees just kept on crashing down. The forest was dying and soon the cats would join them too.

The family came upon a huge rock wall. Many different and weird smells and noises came from behind it and a small hole could be seen below it. Flash looked down in the hole through the wall and looked back up at Fly.

"It leads to the Twolegplace." he told her and sighed. Fly looked at him with worry and pain in her eyes.

"It's only big enough for the kits to go through it." she told him, lookign at her two kits. "They're going to survive." she meowed to her mate, her voice cracking and with sorrow. He looked at her, his face showed the reflection of her expressions and he nodded.

"Silver." he meowed to the black she-cat, the older one, who in turn looked up at him with her huge shimmery silver eyes. "I want you to take care of your sister. Can you do that for mommy and daddy?" he asked her, loev and caring could be heard in his soft voice.

Silver nodded. "Yes daddy." She looked at her mother. "How come you're not coming?" she asked her.

"We can't sweetie. It's your path to take. Your new journey. Daddy and I already had ours and now it's yours and Aqua's turn to start yours." Fly now nuzzled her two daughters in goodbye.

"Will we ever see you again?" she asked.

"Yes. I can promise you that." Flash promised her and lnuzzled his two daughters as well.

"Goodbye. We love you." both parents meowed.

"Bye...." could be heard from both she-kits as they headed into the small hole.

"Even when you don't see us, we still love you."

"Aqua! Come here!" The black she-cat whispered to her sister behind her. "I see our meal." she meowed, pointing at the small mouse crawling through the alley. Aqua padded slowly and quietly towards her sister and looked at the mouse.

Both she-cats were starving and knew that prey had to be taken seriously and never wasted. Through the past few moons they had spent in the Twolegplace, they had learned many things, one of them being able to survive on their own.

Both sisters depended alot on each other, especially Aqua on her older sister. They had been born on different times and therefore weren't the same age. But yet, they had been together for as long as they could remember. Nothing could tear them apart.

The black she-cat crawled carefully, keeping her eyes on the mouse at all times. The mouse kept on sniffing the garbage looking for food. It had no idea the she-cat was there. She apporached the mouse, now being only a leap away from it. This time the mouse noticed her, but it was too late. She leaped at it and her claws landed on top of it, killing it.

"Great catch Silver!" Aqua congratulated her sister. She was learning each time more and more on how to hunt. Both sisters knew the basic moves for fighting, hunting was the struggling part. Silver nodded and now both she-cat circled the mouse.

"Great spirit ancestors. We thank you for sending this mouse for our survival and are grateful for keeping watch over us." Silver meowed.

"Thank you." Aqua finished off. Now they both lied down and ate the mouse slowly so with each bite came the joy of having something to feed off. Neither one of them knew when they would get to see another source of food or prey, and therefore had to be ready.

"Have you heard any news from the other rogues?" Silver asked as she kept eating.

"No. They haven't caused much trouble, and I keep seeing less of them. I just can't stop wandering what's happening to them..." Aqua meowed worried. There was much rivalry between the rogues in the Twolegplace. Both fighting for the common goal of survival. Both refusing to join the soft life of a kittypet in the care of a Twoleg stranger.

"Yeah I guess it's weird, but we got our own problems." Silver responded very calmly. Aqua looked at her and nodded. She looked down at the mouse, having taken only one bite.

"Are you okay Aqua? What's wrong?" Silver asked, noticing her sister's sad look on her face. From all this time living together, they knew each other so well that they could read each other's expressions and know is something was wrong.

"Yes. I always do, but now I know they are in a better place. Where they can always watch over us, and if we ever need them, to talk to them or anything, they are in our hearts. They never truly left us. Not because we can't see them, means they're not here." Silver meowed. "The last thing they told us was 'I love you'. Death cannot stop love. Nothing can. They said that they're adventure was done, but that it was our turn to have one. That's what we have to do. We have to move on and be happy...they would want that."

Aqua nodded to her sister's wise words. "I hardly remember them. They're faces are blurry and dim, and I feel like it's bad not to remember them..."

"You were barely a kit. You wouldn't have remembered them that well from your eyes, but from your heart, you have them memorized." she said as she finished eating her half of the mouse. "Tomorrow, it'll be your turn to hunt."

"Yeah! I think you're ready to have a turn." Silver knew exactly that her sister had been waiting for so long to be able to hunt. Sure she was clumsy, but she was skilled. She had paid attention most of the time to Silver and now it was time to prove herself.

Aqua finally finished eating her mouse. Her eyes were full with anxiety. "I won't disapoint you, I promise." she told her.

"You don't have to make any promises and you'll never disapoint me. Everyone makes mistakes for a reason...To learn from them." She stood up and padded to her younger sister and nuzzled her. "Don't worry..." she whispered to her ear.

"I know you too well because I love you."

"Ok. Just concentrate. It's your first serious try, so don't worry if you don't get it." Silver told her sister before she was too close to the mouse. Aqua nodded and carefully got into the hunter's crouch. Anxiety, exitement, happiness, eagerness were all building up inside of her. She didn't want to disapoint her sister even after what she had said. Silver had done so much for her, and after she properly learned how to hunt, she'll be able to contribute to the survival.

With every pawstep she took, she neared her prey. The mouse had no idea she was there, it was going as planned. Aqua focused on her sister's movements when she hunted. She had to do the same. Suddenly, she heard a few pawsteps from the oposite direction and a cat leaped at the mouse. Aqua stood up alarmed, but the mouse had heard the pawsteps and ran away.

Silver hissed from behind Aqua, and that's when she recognize the cat that had interrupted her hunt. Now that she wasn't focuse don the mouse, she coudl see he had dark brown fur with white paws. Fitz!

"What are you doing here? What is your problem?! Couldn't you bother anyone else? I was trying to get some food here!" Aqua snapped at him. He just looked at her, his expression still the same. Silver padded beside her and Aqua knew what expression would be shown on her face.

"I thought we had an agreement. You hunt South and we hunt North. Wasn't that it?" She asked him. The agreement had been made a little whiel ago, and it was getting better and better, until now.

"Like you know, mice has not been abundant, and there's less of it. So that only leaves so little that the agreement will be stopped." a ginger tom appeared from behind him in the shadows. Claw quickly stepped infront of Fritz and sniffed the air for mice. It surprised Silver that their usual group wasn't among them.

"You're alone? Where are the others?" she asked.

"Why do you care? It's none of your business." Claw meowed sharply and turned to Fitz "Now, back to hunting." Fitz nodded but Aqua wasn't about to let them steal her prey. She stepped forward, already snapping at them madly, but Silver stopped her by getting infront of her.

"It's not worth it. Leave them." Aqua felt a rush of need to defend her territory, but listened to her sister. It wasn't fair, she thought. They shouldn't get everything they want! That's not how life worked. While Silver and her struggled to survive, they always got what they wanted just for acting all tough. "We'll find somewhere else to prey."

Aqua padded through the small alley, carefully focusing alll her attention on mice. Nothing was going to stop her from getting it this time. Suddenly a necklace was around Aqua's neck. She struggled to get it out and pulled back, but then she saw the big twoleg that was holding and pulling the stick that was connected to the necklace. She pulled harder but it was choking her. She coudl hardly breath and finally gave up. The twoleg pulled her into his monster roughly.

"Aqua!" Silver's cry echoed through the alley. It was useless. The twoleg locked the monster and put Aqua in a small cage. The monster suddenly woke up again and started running. Silver felt herself run as fast as she ever has. She couldn't lose her sister. Not now. Not ever.

She ran as fast as she could, but the monster was going too fast.

Retrieved from "https://warriorsfanfic.fandom.com/wiki/Sisters?oldid=89263"
Community content is available under CC-BY-SA unless otherwise noted.