Dedicated to one of my best friends on this wiki, and ever, Robo. Have a great summer! 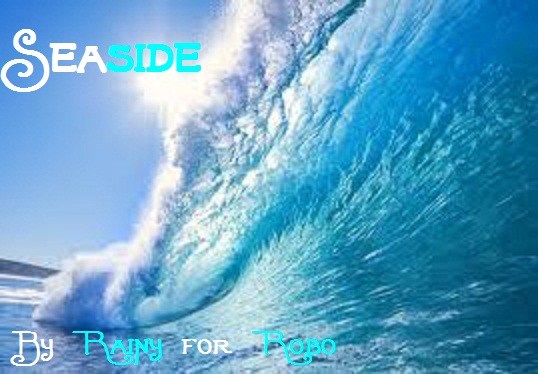 Everything was silent. Overhead, the gulls called to each other as they circled the clear skies, little specks against the underbellies of fluffy white clouds.

A fluffy little kitten raced down the stretch of sandy beach, her white fur billowing in the wind. "Grandma!" she yelled, approaching a large outcrop of rocks that led out towards the sea. "Grandma!" Panting, the little kit clambered up onto the rocks and toddled towards the elderly gray she-cat sitting at the edge. "What are you doing out here alone?"

"About what?" Shelly asked, blue eyes accentuated by the ocean waves around them.

Curling her tail around Shelly, the old cat murmured, "About friendships... about one friendship I had in particular."

"Tell me about it, Grandma," Shelly said with a smile.

The cat closed her eyes, suddenly tossed back into a wealth of memories. She could feel the heat of a bygone summer, hear the laughter of a long-lost youth. "Well, her name was Aqua..."

"Aqua! Aqua! Would you get your butt down here?"

A tousled head emerged from the tangle of weeds that surrounded Aqua's family's den. "Why do you always get up so early, Rain?" she mumbled sleepily, trotting outside and stretching indulgently.

Tossing her head, Rain grinned at her friend cheekily. "Because I'm a morning person."

Aimiably, the two she-cats began walking along a well-worn path, the route they took everyday towards the sea. Birds twittered in the trees, and squirrels frolicked in the thick, luxurious undergrowth. There was a bounce in their step and a certain tilt to their heads. Just by looking at them, you could tell they were the best of friends. They wore identical smiles, and seemed to know what the other was thinking without words.

"So what'll we do today?" Aqua asked as they grew closer to the beach; the sounds of waves crashing against the shore heralded their arrival.

Aqua shook her head impatiently. "We always do that!"

"What else do you want to do at the sea?"

The black she-cat bit her lip and shrugged. "I don't know. Honestly, I don't want to go to the seaside today. I just don't feel like it." When Rain just stared at her, she sighed. "I want to see the world. More of it. This place is really nice, but I feel like there's so much more out there. Y'know?"

They had reached the beach now, with long strips of pearly-white sand glowing in the sun on either side of them. Rain flopped down, and Aqua lay beside her. The two best friends lay on their backs, staring up at the cloudless blue sky. "I don't get what you mean. This place is paradise."

Unable to hide her confusion, Rain's brow furrowed. "But... why?"

An easy grin slipped over Aqua's face. "I don't even know."

And just like that, the words slipped away, whisked off by a summer breeze. Forgotten.

But not lost completely.

They were older now. Adult cats, each with a different path laid out for their paws.

Aqua grew up like the summer breezes, shifting, restless, bringing a glancing beauty to all she touched. Her eyes grew as pretty a green-blue as there ever could be, and her ebony coat was like the darkest night. She attracted every young tom within the area with her wit and charm, and could always be found with a group of friends. But as her clever mind and interests grew, she began to learn all there was to know about her seaside home. And it wasn't enough to feed her imagination.

On the other hand, Rain grew up like the windy gales that racked through the beach, wild and headstrong, with a will more powerful than her might. With clear sapphire eyes and a deep gray pelt, she was a fair looker, but preferred a long run down the beach to a romantic walk with a lover. Her home was her love, the songs of the birds in the trees, the melody of the waves in the surf, the feel of the soft earth beneath her paws. She belonged to the seaside the way the sea itself did, and nothing could drag her away.

But one thing came awfully close to doing so.

"What do you mean you're leaving?"

The words hung in the air between Aqua and Rain. The prior hung her head and sighed. "I knew you'd ask that. I can't explain it, Rain. They call it wanderlust."

"I call it idiocy. You have everything you could ever want here," Rain snapped.

Now it was Aqua's turn to look mad. "Listen, Rain. I don't think you understand. I need to do this. I've met up with some really cool cats. They're loners... well not exactly. They live in a group, and they travel. They asked me to come with them. How can I say no?"

Turning away, Rain muttered, "I thought I was your best friend."

Aqua padded over and touched her nose to Rain's ear. "You know you are. Don't be a mouse-brain. I'll come back."

"Yeah right." But Rain could feel the bitterness washing away.

The gray she-cat's shoulders slumped. "I'm gonna hold you to that."

There was quiet for a bit. Then, tentatively, Aqua said in a soft voice - so soft it was barely audible, "You could come with me."

Wincing, Rain shook her head. "I couldn't leave here, Aqua. Don't make this harder then it needs to be."

Her friend gave a shrug. "I had to try."

Rain looped her tail through Aqua's and licked her on the cheek. "I'll miss you a lot, Aqua. I can't put it into words."

Smiling at each other, the two friends touched noses. Then Aqua turned and began racing away, to catch up with her group of friends. And Rain stood on the beach for a long time, watching the waves hurl themselves at the rocks. As she watched the dawn sun rise over the sparkling waters, she realized that no matter how much she loved Aqua, she belonged here.

She'll return someday. And it'll be the best day of my life.

"And did she return?" asked Shelly.

The little kit bit her lip. "Do you honestly believe she will, Grandma? I mean... it's been so long."

Rain read what the kit was too sweet to say. I haven't got much time left on this earth. "I don't know Shelly. Maybe something happened to her."

Quietly, the kid nodded, and slipped off the rocky outcrop. She sensed that her grandmother needed some time alone, and trotted back the way she came. Rain barely noticed when her granddaughter slipped away, her eyes - the only thing still retaining her former vivacity and youth - fixated on the wavering blue horizon. Was she just a delusional old cat, waiting forever for her friend's return? Oh, she'd lived her life. In the end, she had found true love, tomboy that she was. She had raised a beautiful family, one she was extremely proud of. But... she had never forgotten Aqua.

That was when she heard the voice. "Rain? Is that you?"

She didn't need to turn around to know who it was. Yes, the voice was creeky and older sounding, and the cat standing in the sand had scars where Aqua's fur had once rippled smoothly. But it was her. Rain knew it as surely as breathing.

And the two friends reuinted by the seaside, where long ago, they had played as young ones.

It was beautiful. It was true. It was everything that friendship is. To this day.

Retrieved from "https://warriorsfanfic.fandom.com/wiki/Seaside?oldid=190719"
Community content is available under CC-BY-SA unless otherwise noted.