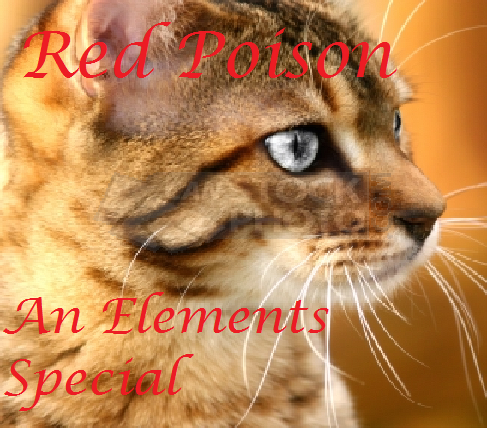 This is an Elements special edition

She will burn with the most crimson of flames,

But at the end, a bitter poison will sting her mouth

And mould it into evil

Redkit is born in a harsh leaf bere, where in DarkClan, there is less and less food as they move around the forests and fields. Redkit's parents have died of starvation, and she and Deathkit are the only kits left.

But with her birth comes an ominous prophecy that could destroy them all, and an unprecceded chain of events are about to follow.

A sharp wind whipped the trees and rustled the plants. Nestled in an old fox den, DarkClan were sheltered from the weather.

Buried under the ground, the rank scent of old foxes drifted about the place, but no one cared. This was the best shelter they'd had for days.

With cramped space and no food, this was no life for cats. But they had worse things to worry about. Everyone as either starved, half starved or hungry. The kits were dying. Berrykit and Honeykit had died just last night from lack of milk.

The heavily pregnant queen, Ripplepool was close to death.

In the largest space possible, a very fragile and thin tom was crouched over her. He was the medicine cat, Shadefur. He had worked tirelessly for the past few moons, though he refused to be cared for. His Clan was more important, was his reply whenever a Clanmateoffered him food or rest.

Shadefur placed a frail paw on Ripplepool's bloated stomach. He could feel three kits insid there. One was moving, the others were still. He swallowed.

Two were dead, never to see the sunlight again.

A similar thing had happened to Poppyspot-Berrykiit and Honeykit were almost dead at birth. Now only Deathkit survived. Poppyspot had named him that in fear that he would die too. That hadn' happened.

Ripplepool was breathing shallow breaths, uneven and that unnereved Shadefur for some reason. He was afraid that this queen in labour would meet her demise tonight, with many others. He shook his head. This is no way to live! We are DarkClan, the fiercest and bravest cats to exist!

He gave Ripplepool some poppy seeds, the last of what he had. The queen shrieked, and a small grey tabby tom slid out onto the moss. He had no heartbeat. He was to never see the beautiful sun or the clouds, kil his first kill or become a warrior.

Shadefur forced himself not to mourn for this kit, and concentrated on delivering the next one. He was born lifeless as well.

However, there was a small flicker of hope. A small cream she-cat was bawling on the moss, crying for milk. Ripplepool nestled her in with a purr, desperate to keep one alive. She licked its fur backwards, but this little kit was strong, happy.

Her mother was not. Her breaths came slowly, her heartbeat slowed. 'Fetch Rainstar!' he hissed to Ripplepool's mate, Gorsewind. He nodded, and brought the leader to the makeshift den.

It was too late.

Ripplepool had stopped breathing. Shadefur hung his head. He must've done something wrong. he handed the little she kit to Poppyspot. She accepted the new arrival with a nod of gratefulness.

Shadefur turned to Gorsewind. His eyes were hollow. 'What do you wish to call this beautiful kit?' the medicine cat asked.

The warrior blazed with fire. 'She will surely die, like her siblings and her mother!' he hissed, driven by sorrow.

'You must name her!' Poppyspot croaked.

Gorsewing glared, but responded anyway. 'Then I name her Redkit, for the blood that has been spilled tonight. She is no daughter of mine.'

And he whipped out of the den.

Shadefur walked with StarClan that night. The ancient Darkstar was with him, comforting him. 'That kit is special,' the old leader rasped. 'She will do great things..' His eyes glassed over.

Shadefur gulped. He new that a prophecy was about to be delivered to him. She will burn with the most crimson of flames, but at the end, a bitter poison will sting her mouth, and mould it into evil.

Shadefur knew who Darkstar was talking about.

Retrieved from "https://warriorsfanfic.fandom.com/wiki/Red_Poison?oldid=296812"
Community content is available under CC-BY-SA unless otherwise noted.