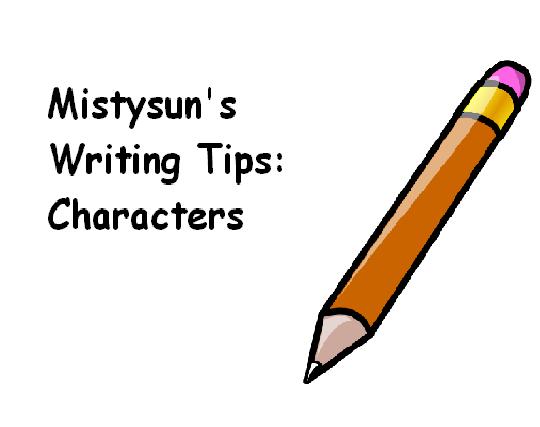 This is written by Mistysun, and is part of the Mistysun's Writing Tips series.

A character is a huge part of your story, and without a good character, you don't have a good story. When reading this, you will learn how to pick character names, develop strong, likeable characters, making personalities, apperences, and more that builds characters! Feel free to express your opinion and voe on the poll on the talk page!

The Steps to Making a Character:

There are steps you need to follow in making a character. To get the best results, you should probably follow the steps in order. Here are the steps I make my character in:

These are just the basic guidelines. I could go into a lot more detail about each step, and add many more, but that's really what the following sections are about. =D

Personality is everything: You should always make a character's personality before anything else. "Why?", you may ask. Well, think about it. You are friends with people because of their personality. You don't choose them for their name or what they look like. It's the inside that always really counts. So, don't make a character thinking, I want them to be a tabby, or I want them to have the nane Lilacfeather. That's not a good way to make a charrie. You do know the saying, "Character counts!", right? Well, it does.

Mean and nice? Hmm: A cat's personality isn't just nice or mean. Those really have no meaning. Each can be broken down into different words. Instead of using the word nice, why don't you say: kind, caring, helpful, friendly, cheerful, giving, gentle etc. And instead of using the word mean, use: Rude, nasty, cold, heartless, bitter, ruthless, dangerous, etc. (For mean, try to stay away from the word evil because evil is to be completly and totally nasty, rude, heartless, and cruel. Most cats will always have a bit on kindness in them, no matter how small.) Often, a character is many of those things. Sometimes they can even be some nice things and some mean things! Also, those aren't the only personalities. A lot don't have anything to do with being mean or nice!

Weather and Object Personalities: Often personalities can be describled as weather or objects/materials. Being sunny means having a lively and cheerful personality. Being bright means the same thing as sunny. Being cold is a harsh, cunning, heartless personality. Being stormy means to be wild, get angry easily, grumpy. Now, what about the materials? Being firey means to be lively, snippy, adventurous, brave. Being sweet means to be kind, helpful, friendly, cheerful. Being sour means to be rude, bossy, grouchy.

Revealing Personalities in Stories: Often, in stories, a personality isn't directly given in the text. Usually, you just have to figure out what the charrie's personality is yourself. So, instead of saying: 'Silverfur was a grouchy cat, whom no one liked,', you could say: 'Silverfur glared at her, and mumbled something rude. Typical behavior.' People will infer about the character's behaivor depending on how they act around other characters, and what they do. A reader will be able to figure out a character's personality by themselves. BUT... If you are writing a story for young children, saying the personality in the story would be fine however. This makes a story a lot eaiser for the kid to understand, and they will not get confused.

Reviewing Personality: Well, that's it! You've reached the end of the personality section. Next up is Apperance, and then Naming. First though, let's review some of the major things about personality:

Fur Lengths: Cat's fur can be long or short The main lengths are short, long, and medium, which is the in-between length between long fur and short fur. A certain length is not particular to any pattern or color of fur. Length of fur is not particularly important to a story and does not need to be mentioned in it. You may mention it if you'd like to though, but it is an unnessicary detail. On the contrary though, it could be very important to your sotry. Let's say the main character was escaping from a pack of dogs: "Rainfoot ran through the thicket of brambes, hearing the dogs pounding after her. She continued running, trying to get away from them as fast as possible. As she tore through the bushes, her long fur snagged on a thorn. Oh no, she was stuck, and the dogs were gaining on her!" If that cat had short fur, she would have likely been able to get away. So, in that story, length was important. Wheather it is important or not in your story is up to you.

Eyes: Cat's eyes can both be one color, or two different colors. Cat's eye colors are usually green, amber, brown, gray, hazel, and blue. Usually, but not always, when a cat has two different colored eyes, one is blue and the other is green. Cats can also be blind. They do not have to be blind in both eyes, only one. If you don't want your cat to be blind, but you want it to not be able to see, you could have one or two of their eyes scratched out. If a cat can't see, it wil often make a big inpact on the story. So, when choosing if your cat can see or not, choose carefully, because your desicion could impact your whole story.

Size: Cats, like humans can be many sizes. A cat could be tall, short, large, small, fat, skinny, heavy, light, etc... Size can affect a cat's hunting and fighting ability. For example, fat cats probably would be bad at hunting because they can't run very fast, and a large cat may be a good fighter. Size usually isn't that important, but it really depends on your story. An example of a story in which size does matter: Foxpaw carefully creeped into Riverclan's camp. If a Riverclan cat caought her sneking in, she knew she would be in trouble. She heard footsteps, saw an abandoned rabbit hole. Since she was so skinny, Foxpaw could just about fit into it. In this story, Foxpaw would have been caught by the cat if she was too fat to fit into the rabbit hole.

Review: That's about it for apperance! When you are creating the apperance of youer cats, try to keep in mind everything above and especially the key points below:

What Warriors Do/don't know: Naming warriors is a lot different than naming humans. A warrior's name depends a lot on their personality and what they look like. Warrior's names only involve natural stuff. They do not know twoleg/people words like chair, table, rug, lamp, cloth, ink, etc. Warriors also are not aware of the existance of many plants or animals. They probably won't know what a elephant is, unless of couse they live in Africa. They also won't know what a pineapple, guava, Palm tree, Hippo, monkey, etc are. They do, however, know the animals Lion, Leopard, Tiger, because those were the decendants of the clan cats. They also know the friuts cherry and apple. Also, a clan cat cannot have the word sea or ocean im their name. If you remember, warriors call the ocean/sea Sundrownplace. And, since you can't really give a warrior a name like Sundrownplace, warriors cannot be named sea or ocean.

Now that we have that covered the basics, how does a name fit a cat? Let's look at some examples the Erin Hunters gave us:

Fireheart (Later Firestar): Fireheart is orange, the color of fire, and has a firery personality. He a slo has a big heart, and is true to his heart.

Hawkfrost: Hawkfrost is brown, the color of a hawk, and has a mean, frosty personality.

Here are some of my own examples:

Mistysun: Mistysun is grey, the color of mist, and has yellow eyes that look like suns. She also has a sunny (happy) personality.

Hawkfur: Hawkfur's fur is brown, the color of a hawk. Hawkfur also has the personality of a hawk. Mysterious and very demanding.

Both parts of these cat's names have to do with their apperance or personality. But sometimes only one part has to fit. Just make sure, when deciding names, that at least on part of the name fits with the character.

Rouge/Loner Names: Rouges and loners are stray cats. They do not have a twoleg owner, nor belong to a clan. However, rouges and loners could have used to be a kittypet or belong to a clan, so they could have a clan or kittypet name. If a loner/rouge has a clan name, it will usually not change. What I mean is that if a loner become a loner when they are an apprentice, they will ussually keep their apprentice name no matter how old they are. They, could, of course, change their name to whatever they please. Here are some examples from the Warriors Series of loner names:

Barley: Before Barley was a rouge, he lived in Bloodclan, which was more like an unorganized group of stray cats with one cat dictating over them. His mothger named him Barley. When he ran away to become a loner, he kept the name Barley.

Ravenpaw: Ravenpaw was an apprentice of Thunderclan until he ran away to be a loner and live with Barley. Even when he became a warrior's age, he still kept the name Ravenpaw.

What To Remember: Well, I think I've pretty much covered everthing about naming. If you have any questions, or are confused about something I said, feel free to ask on the talk page. I'll just go over the generals of naming cats:

And that's it for naming cats!

Retrieved from "https://warriorsfanfic.fandom.com/wiki/Mistysun%27s_Writing_Tips:_Characters?oldid=110377"
Community content is available under CC-BY-SA unless otherwise noted.