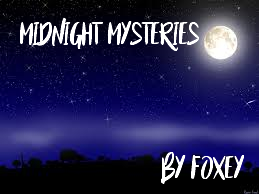 Every moon, cats ranging from 10-20 moons old are taken to do the most risky thing they could ever do. Each cat dreads it, but when a Clan attacks your society, there is not a choice. Diana just wants to protect her family so she volunteers. But this young confident cat never considered the risks of spying...

Here you can find fun facts about Midnight Mysteries that you've never heard before!

Here are some side stories to Midnight Mysteries. These basically fill in parts of the plot that readers have never experienced before.

Are you a fan of Midnight Mysteries? Here, you can show your love for the show by signing this list!

Retrieved from "https://warriorsfanfic.fandom.com/wiki/Midnight_Mysteries?oldid=323212"
Community content is available under CC-BY-SA unless otherwise noted.