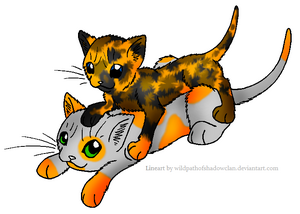 When Dawnpaw became an apprentice, she's given the mentor she despises most; Lionfire, a cat who was formerly a rogue, but brought in by the leader.

Dawnpaw's opinions quickly change on the friendly, trustworthy mentor. But when the group of cats Lionfire formerly lived with invade ThunderClan territory, will he prove to be as loyal as Dawnpaw believes he is?

Dapplewing: Dappled gray she-cat with blue eyes Chapter One Dawnkit wriggled away from her mothers grooming tongue; her pelt was already smooth as silk, and shined in the sunlight. Any more grooming and it would be ruined.

"Dawnkit!" She heard her friend, Sunpaw, calling her. She glanced at her mother, then bounded off. "What took you so long?" Sunpaw muttered from the side of her mouth; Flowerstar was climbing up the Tree Stump.

"My mother claimed I had mud on my fur," Dawnkit muttered back. "But it was just a patch of brown fur." Sunpaw giggled, but was silenced by her mentor Willowfern's glare.

"Cats of ThunderClan!" Flowerstar yowled. "Today we gather to name a new apprentice. Dawnkit, please come forth." Dawnkit felt Sunpaw's tail of her flank before she strutted her way to the tall tree stump. Once she was at the bottom, she prepared to jump to stand beside her leader, but Flowerstar's deputy, Rainleap, grabbed her by the scruff and lifted her up. Dawnkit froze when she realized she was sitting on the Tree Stump with Flowerstar. "Dawnkit, from this moment until you become a warrior, you will be known as Dawnpaw." Dawnpaw could only blink. "Your mentor will be Lionfire." Dawnpaw seemed to find her tongue.

"What?" Dawnpaw wailed. Lionfire had been a rogue that Flowerstar had brought in because he had good skills. She had never trusted him, and never would. "Lionfire?!" Flowerstar met her green gaze with one of firey amber.

"Yes. You will be mentored by Lionfire." Flowerstar blinked slowly, daring Dawnpaw to object. She glowered at the white and ginger tom in the crowd, who's eyes were shining with embarasment as Clan members twisted to look at him. Flowerstar laid her muzzle on Dawnpaw's head, and she reluncantly licked the tortoiseshell's shoulder. Dawnpaw leaped down to meet Lionfire, who seemed uncomfortable. He bent his head to touch his nose to her's, the tradition, but she only glared at him. He pursed his lips and straightened. Dawnpaw's older sister, Dapplepaw, bounded forward, calling her new name. "Hello, Lionfire," Dapplepaw greeted the tom like she would any Clanmate. Dapplepaw had never shared Dawnpaw's dislike of him. Lionfire dipped his head to her, then turned back to Dawnpaw as Dapplepaw went to talk to her friend.

"I understand you distrust me," He mewed, surprisingly calm. "But I only ask you to behave yourself, and let me teach you what I know." Dawnpaw curled her lip.

"I don't want to learn what you have to teach me," She snarled. "But it seems I have no choice." Lionfire rolled his eyes and stalked off to the warriors den, leaving Dawnpaw alone in the middle of her Clanmates, who were laughing at her. She'd never been left alone before.

"Dawnpaw?" A voice called softly from the enterance the apprentices den. Dawnpaw groaned and rolled over, closer to Dapplepaw. "Dawnpaw!" Dawnpaw shot to her paws, scattering the moss of her nest.

"What?!" She howled, waking all the apprentices. Sunpaw moaned as Bloodpaw, a huge dark ginger tom, sprang to his paws and snarled. Lionfire's breath caught in his throat.

"Come on. I gave you all of yesterday to moan and groan about how you got an experienced, skilled warrior as a mentor. Now let's go. You're learning how to hunt today." Dawnpaw's jaw dropped, and Bloodpaw snickered as he laid back down

"He's right, you know," The ginger tom muttered, fighting sleep. "He's a good warrior, and you don't trust..." His words trailed off as sleep took over him. Dawnpaw rolled her eyes, but shoved out of the den. Lionfire was muttering softly to Rainleap, who's blue eyes were flashing.

"I'm sorry about her. She's a bit moody today." Dawnpaw's pelt was flaming hot with anger as she whirled around.

"Don't talk as if you're my father!" She snarled so loudly that Heatherwhisker, a white and brown tabby, looked up in alarm from the other side of the camp. "You're not, and you never will be. You'll never be anything to me. I don't even count you as a mentor." She turned on her heels, away from Rainleap's shocked blue eyes and Lionfire's hurt green ones. Fighting grief for her dead father, she pelted into the forest. She couldn't hear anything behind her.

Good, she thought to herself. But half of her wanted somecat to come and comfort her. Anyone but Lionfire! Her anger pulsed hot in her veins, giving her the energy and strength to run faster. Before she knew it, the strong scent of pine alerted her of the ShadowClan border. She slowed to a trot and looked around for prey. She could scent mouse, and dropped down, following the trail.

I'll show Lionfire. I can hunt. She finally saw the mouse, sitting on an oak root and gnawing on a seed. She kept perfectly still, then leaped, paws outstretched. The mouse took one look and bolted. Dawnpaw screeched in frustration and chased after it. The mouse was darting for a hole in the ground, but Dawnpaw managed to slap her paw over the enternace before the mouse could escape. It squealed in fear and turned, running blind. Dawnpaw finally managed to catch up and grab the mouse between her jaws; the loud crack! told her she'd crushed it dead.

"Well done." Dawnpaw turned to see Lionfire standing on a boulder, watching her, his tail wrapped over his paws. She set it down, feeling disgusted he'd seen that messy kill. Then something warm - not hot, like anger, but warm - explode in her chest. Pride. She was proud Lionfire had seen her hunt her first prey? Or... proud he'd praised her on it? Either way, she grinned and picked it up again.

"I'll give it to the queens," She mumbled around her catch. Lionfire, who'd jumped down, stepped to the side to let her by. As Dawnpaw trotted back to camp, she couldn't help but miss the warm sensation in her chest.

Dawnpaw leaped and twisted, trying to grab the fern Lionfire was dangling over her head. She snarled as her paws grabbed nothing but thin air, and hit the ground with a thud.

"Your leap is too weak," Lionfire called, dropping the fern and leaping out of the tree. "You need to work on that." Dawnpaw nodded quickly.

She'd been Lionfire's apprentice for three moons now, and only a thin shred of distrust for him still lingered inside her. For the most part, she listened to what he had to say, and followed his orders; he was a surprisingly good hunter and fighter. She wanted to learn all he had to teach. And he seemed satisfied that she was listening to him now.

"I'll practice my jumps," Dawnpaw promised, already crouching to leap into the air again. Lionfire purred and laid his tail on her shoulders.

"I think we've practiced enough today," He laughed. "Look." He pointed with his nose to the sun; it was dipping down into the horizon, darkness spreading across the sky opposite it. Dawnpaw sighed and straightened.

"I suppose," She murmured, licking her chest. She was covered in dust and leaves. Lionfire shook his head with a smile and lead the way back to camp.

Dapplewing was sitting near the fresh-kill pile, sharing tounges with her mate, Bloodclaw. Dawnpaw's sister lifted her head and blinked a greeting at her as she chose a mouse and flopped beside her.

"Good," Dawnpaw replied, her mouth full of prey. "My leaps are too weak, though. I need to practice them. Want to help me?"

"No!" Bloodclaw hissed, pelt bristling. "Dapplewing, you can't be jumping! You'll damage the-"

"Shh!" Dapplewing hissed, clapping her tail over his mouth, but it was too late.

"You're pregnant?" Dawnpaw yelped in surprise. Her sister had only been a warrior for two moons, Bloodclaw three, and they were already having kits together?

"I wasn't planning on announcing it to the Clan just yet," Dapplewing hissed, glaring at Bloodclaw. "But now that he's blabbed, I assume cats are going to be all over me, yelping at me to move into the nursery." She huffed crossly and licked her gray-dappled flank.

"I won't tell anyone," Dawnpaw promised, getting to her paws. She licked her sisters' ear and padded off to the apprentices' den. As she settled into her nest, she couldn't help but imagine her sister and Bloodclaw sitting in camp, tiny kits crawling all over them.

I'm so happy for her, Dawnpaw thought as she drifted off.

The next day, Dawnpaw woke to birdsong trilling outside the apprentices' den. The tortoiseshell apprentice sat up, grooming moss from her fur, and examining the den. Sunpaw, nearly ready to be named a warrior, was curled up in her nest, her flank rising and falling in steady rhythm. Brightpaw's nest was empty, along with Heavypaw's. Riverpaw was a mound of striped gray fur atop a pile of moss in the corner.

"Dawnpaw?" A white and ginger head poked into the den. The young cat blinked and heaved herself to her paws.

"Sure, Lionfire..." Dawnpaw mumbled, getting to her paws. Truth was, she still wanted to sleep; her dreams had been interupted by nightmares all night long, and her eyes were in danger of drooping shut. But Lionfire didn't notice; he dropped a quick nod before dashing out. Dawnpaw stretched her dappled legs in front of her, groaning. She shook out her pelt and followed her mentor into camp.

Dapplewing was sharing a mouse with Nightwish outside the nursery. Nightwish's belly was huge with unborn kits; the medicine cat had predicted it would be an unusually large litter, and though Nightwish claimed she was strong enough to handle the birth, you could always tell when she was thinking about it; her tail would start to twitch uneasily.

Lionfire was speaking with Rainleap near the camp enterance. When he spotted her, he said goodbye to the deputy, and the two cats headed out into the forest.

"So," Lionfire said after a while. "When are Dapplewing's kits due?" The question brought Dawnpaw up short, and she stopped in surprise.

"W-What do you mean?" She stammered, pelt hot. Lionfire purred.

"I can tell when a she-cat is pregnant, Dawnpaw. Nearly the whole Clan knows. Why do you think Nightwish has been so friendly towards her?" He shook his head. "She started to show half a moon ago. You didn't notice?" Dawnpaw shook her head, a little guiltily. She hadn't noticed, not even after Dapplewing had told her. How could she not know her sister enough to notice this?

Dawnpaw and Lionfire padded into camp at sunhigh, carrying two mice each. Dawnpaw had just dropped one of her mice on the pile, ready to settle down and eat the second, when a yowl sounded from the nursery.

"Dawnpaw, come here! I need you!" Surprised, Dawnpaw abandoned her kill and trotted into the dimly lit den. A soft moan greeted her.

"Yes, Fireleap?" She murmured to the medicine cat, who was hunched over a shadowy figure.

"Nightwish is in labor," He grunted. "I don't have an apprentice, and since you're the only one in camp, I'll need you to help me." Dawnpaw blinked.

"But I don't know what to do!" She gasped, taking a step back.

"You don't need to. I'll tell you what to do." Dawnpaw was still doubtful, but when Nightwish let out a yowl and dug her claws into the earth, she dropped to a crouch beside Fireleap.

"What do I do?" She begged as Nightwish twisted and writhed.

Retrieved from "https://warriorsfanfic.fandom.com/wiki/Mentor_and_Apprentice?oldid=114024"
Community content is available under CC-BY-SA unless otherwise noted.