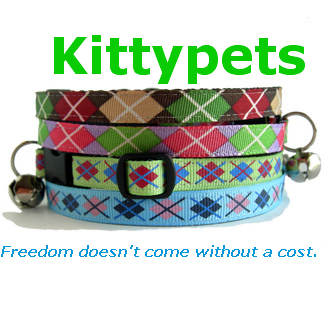 4 kittypets are forced to leave their home. They are trying to survive in the wild with out basket and (GASP!) cream! Can these cats survive alone? As more cats come to the group for help and protection, they form a small Clan of their own. There will defiantly be casualties but can the rest of these unprepared cats survive the harsh wild?

1. Lost and Alone- The kittypets are first driven out of their homes and must unite together.....or die.

2. Harsh Wild- The kittypets are not prepared for the harsh conditions of the wilderness and are trying in vain to get to a Twoleg with a helping hand. But a death makes them realize that there won't always be a comfy nest and hot food for them...

3. Survival- The kittypets are getting the hang of their new life but they are still unprepared for the horrors of the forest they had never seen before.

4. Home- Just as the cats have discovered a lake and made their home, they realize that they are not alone. They must fight or flee...and if they fight they face the fury of four Clans united.

5. SkyClan- The lost Clan becomes real again. but good byes are said as cats go their own ways. It has been hard but the kittypets found their place.

Second Arc - Whisper of The Warriors

1. Whisper of the Warriors- Bramblekit and Starkit grow up in SkyClan with their friends. They think everything is normal and that things are fine. But whispers about the original cats of SkyClan cause them to worry. what really happened to the Clan in the begginning?

2. Lightning Flash- Things are tense in the Clans and rumors about the cats of SkyClan only make things worse. But suddenly, a storm sweeps through the Clans and all they have is eachother.

3. You'll Always Be My Sister- A secret from the past causes Bramblestrike and Stargaze to drift apart. Fight happen and not all of them will be solved.

4. Watch Us Fall- With all of the hostility around them, the cats of SkyClan begin to leave and murmer and soon, only a few loyal cats truely remain.

5. Plan to Prove- Bramblestrike and Stargaze come up with a plan to prove once and for all that SkyClan belongs. And a few unexpected cats make appearences.

As of now, if you are applying for charecters, I will only be allowing Clan cats or Loner/rogue/kittypets that already live at the lake territories! Thanks!

Please give me some constructive comments here. This isn't a chat, just ideas or comments. Thanks.

Starry in a hidden ocean

I've moved all the charries to make it easier for meh hurting head. xD

Retrieved from "https://warriorsfanfic.fandom.com/wiki/Kittypets_Series?oldid=247736"
Community content is available under CC-BY-SA unless otherwise noted.