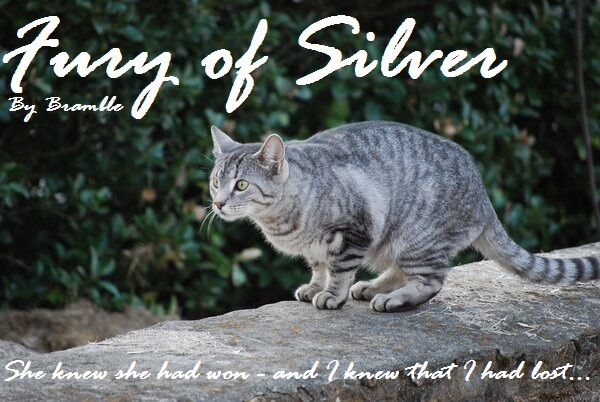 A fanfic in Stories of Flame

NOTE: This fanfic may seem confusing if you haven't read Dusks of Copper first.

I'm flailing. Flailing under my sister's paws, her claws digging into my skin. She's staring at me with her narrowed blue gaze, now full of unseen fire.

Many moons ago, all I saw in those eyes were fear - fear of me. Now, I admire her battle skill, even though I'm the one being threatened.

My torn ear bleeds from under me - a fresh wound that she inflicted on me. I'm going to lose, if I don't go quickly. Mustering up all my strength, I yowl at her: "I will get back to you! You will pay, Copper, you never should've turned to those Clan cats in the first place!"

My sister - Copper - stared coldly at me, her gaze unwavering. "And whose fault was that? It was yours."

My memories flash back to the days - the days of kittenhood, before I came to this brutal life...

"...And that was my backstory," my mother finished with a flourish, her red-brown tail flicking as she gazed over the four of us, her green eyes wide. Sweeping her eyes over us, she added: "Any questions?"

I looked towards my siblings. I wasn't interested in the whole story - who cares about those Clan cats! - but I pretended to be so. Beside me, I saw my brother, and my two sisters shake their heads.

My brother, Titan, scurried away, and went to sit with my father. The dark gray tom gazed at his kits with a superior look in his blue eyes. Titan squeaked as he crashed into our father, and he purred wildly.

I beckoned for my golden-furred sister, Goldie, to come over. She eventually listened, and then she came over to me. My other sister - Copper - was with my mother, and I could hear her high-pitched squeal from here:

"Mother? Are the Clan cats nasty? Can I join them one day?" The noise seemed to grate on me...

Goldie's tail swept along the forest floor, her amber eyes round. "She interested in them," she squeaked. "I have no idea why."

I snorted at my sister. "You know what that means?" A sudden thought - my mother would say that it wouldn't be nice, but I didn't care. "We'll leave her out. She'll be the outsider."

Goldie looked hesitant, and then she nodded in agreement.

Jolting back to the present, my sister's mew was the first thing to awaken me. She hissed, "By the way, my name is Copperdusk, not Copper."

The sound of my sister's name - her different name - made myself hate her even more. Traitor, traitor! my thoughts seemed to scream to myself, as her claws sunk into my flank. I gritted my teeth, to stop myself from yowling, and thried to make her get off me, but it was no use. She was the one with the power.

My past memories tugged at me again, when that black smoke tabby led me to the place, the place where I could easily let my fury fester...

"So," the black tabby tom purred, as he circled round me, his tail flicking. "You want revenge, young Sylvie? I know just the place."

I watched the adult tom pace around me, feeling nervous. I saw his mate - a pale brown tabby - lap her barely swollen stomach - pregnant with her second litter, as the cat had said.

"It's called DarkClan," the cat announced. He gave me a nod, and then he continued: "If your sister was suspected of going into FlameClan - which she probably did - that would be your answer. DarkClan hates FlameClan," he finished.

"Are you sure?" I asked him, cocking my head.

He nodded at me, his green gaze full of delight. "That I am sure of," he purred. "You should make the most of your opportunities, Sylvie. Never regret a moment of your life."

That last part of what Maikuku had said now seemed like I had not been destined to fulfil it.

Back in reality, I feebly tried to swipe at Copper - wait a moment - not that, Copperdusk - but all my blows that I tried to aim failed. Copperdusk glared at me fiercely.

I felt her grip harden on me, and then her mew: "Goodbye, Sylvie... I'll never have to suffer your pain again."

And then the claws hit once more, and it was agony - pure agony.

The claws - these physical claws, that were causing so much pain - reminded me of another set of claws - the ones that scarred you when a friend was lost. I remembered that time, when my mentor was killed, on the eve of becoming a Spike of DarkClan...

That night was when a battle between DarkClan and FlameClan occurred - and Knurren was killed. That night, I couldn't sleep - due to Knurren, and the excitement of becoming a Spike.

I'd been restless, my green eyes open as I glared at the shadows outside. I could hear the Spikes conversing between one another, their voices sharp. I hadn't been selected on the patrol - but I sure wish that I had been.

"Knurren killed a FlameClan warrior, thank goodness for that, but what was she thinking when she took off her collar for the battle? That was what caused her demise..."

"A dark ginger FlameClan apprentice killed her," another cat added in the shadows, their tail flicking. "Knurren should've fought her off." The cat snorted, and I could see the cat kick my mentor's unmoving body.

The words 'dark ginger' hit me like a lightning bolt. I wasn't confident, but I was dead set on the fact that the cat that had killed Knurren was Copper.

I will get revenge, I vowed to myself, on that chilly, cold night.

But I had failed. Only for my own good, as well - maybe I shouldn't have done this alone.

My vision was darkening now. The pain from Copperdusk pained me so much, and I saw blood - my own red, scarlet blood - was pooling around me, getting darker every second I looked at it.

I then looked up at Copperdusk, using all my strength to look up at my sister. She knew she had won - and I knew that I had lost...

Her face was still staring up at me - triumphantly - as my vision turned completely black, and I knew nothing more.

I suppose I enjoyed writing this - the main pivots of Sylvie's life flashing before her eyes... I suppose she regretted it all in the end. (Unfortunately, it was too late for Sylvie - she ended up in the Dark Forest hehe)

Retrieved from "https://warriorsfanfic.fandom.com/wiki/Fury_of_Silver?oldid=268264"
Community content is available under CC-BY-SA unless otherwise noted.