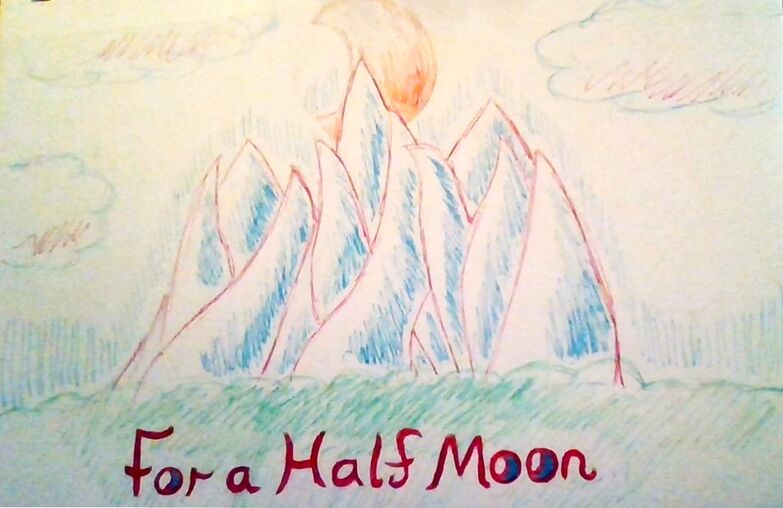 Jayfeather is back with the Tribe. Why? Even Rock doesn't know, but as he stays longer, bad things appear. Really bad things. Things that could change everything...

Rock was feeling weary, every hour he sat waiting for Jayfeather to notice him like he always did, he had been doing this for a long time. It seemed as is Jayfeather was purposely doing this, ignoring him. He lay in his nest, his back to Rock, staring out into space at ThunderClan, and what it had become. Rock sensed his fear and sadness, as if he had lost something. Leaves crunching, Bristlefrost was pacing towards his den, and Rock hid. "Cloudtail has whitecough." Bristlefrost mewed worriedly. Sighing, Jayfeather strode over to the store, grabbing the catmint, he dropped it in front of her, and went back to sit in his nest, looking troubled. Slowly it grew dark, and the sky was shifting to an almost starless, leaf-fall night. Rock then knew what Jayfeather longed for, as he stared up into the sky.... a half moon...
...

Someone was watching Rock in the distance, creeping slowly closer and closer... ears pricking at the mutters Rock made, and eyes staring at the glowing moon above her. It was time.

Jayfeather woke at moonhigh, a cold breeze whisking around him. He was not in ThunderClan anymore. He thought about the Tribe of Rushing Water, and about how it felt like he was there. Suddenly he realized his eyes were closed, and when he opened them, he saw the Cave of Pointed Stones. Dread flooded into him, making him start to yowl softly, as if he was in pain. A figure twitched a bit at the noise, and Jayfeather saw Half Moon, curled up beside him. Why am I here? He muttered quietly, and got up. Pacing around the room, he spotted Rock in the corner of the cave, shrouded by darkness. Rock sharply turned, a hint of a sneer in his voice. "Was this you're wish, Jay's Wing?"

The next morning, Jayfeather woke to see Half Moon flinching in his presence, her eyes round in shock. "I thought you were gone, Jay's Wing! I saw you vanish into thin air! The she-cat mewed loudly, as though she wanted every cat in the cave to come and see him. He saw her blink slowly, hoping he was just a dream, "I am here now" He whispered quiet enough that only she could hear, as Furled Bracken and Broken Shadows approached the Cave of Pointed Stones. Confusion draped over them like the honeysuckle tendrils that were used when a beech tree fell in ThunderClan, killing Longtail and permanently crippling Briarlight. Jay's Wing probably doesn't know that., Jayfeather considered, and kept silent as Furled Bracken stared at him, as he yowled his worries away.

Suddenly, Half Moon's eyes started to glow warmly. "... Well, you are here now..." she meowed, and Jayfeather felt deeply for her.

Jayfeather was trying to sleep in a feather-lined nest close to the cave, though he was exhausted, he felt energized too. Lion's Roar, a new prey-hunter, had just shown him around the mountain as if he had never been there before "I did disappear when he was a newborn kit, so he probably doesn't remember me." He muttered to himself, matter-of-factly. As Jayfeather slowly drifted off to sleep, he started to dream...

He was in pure darkness, an unseen light shining above him, rippling on the stone floor as if he was underwater. Rock sat calmly in front of him, washing his paws. "Get out of here." He spoke in a monochrome tone. "Why waste your time here with me? All that will happen is you will DIE without STARCLAN." As Rock said this he stared straight at him, eyes wide and round. This spooked Jayfeather, making his fur bristle. How do I know he's right? It is fine here.... Rock is just exaggerating.. But even as Jayfeather told himself this, he started to doubt it more and more...

Lion's Roar yawns, drowsy from the late night. Who was that gray cat really? He had a hazy vision of Jay's Wing, or at least he thought it was Jay's Wing beside Stoneteller a long time ago... Crawling out of the dip in the cave, he saw him there, Stoneteller beside him.

She seemed very excited to see him.

Narrowing his eyes, Lion's Roar sat next to Dove's Wing,

It was late at night, when shadows came out and took over Lion's Roar.

Struggling inside his mind, he longed to wail out for someone to help him...

...as his possessed body strode over to where Jay's Wing slept

The darkness consuming him.

Lion's Roar was near the entrance of the Cave of Pointed Stones, something eerie about his presence.

It looked like he was floating, everything around him was nothingness.. invisble.

All colors a monochrome of black.

"Do you want to go on patrol?" Lion's Roar mewed again, growing irritated that he had paused for so long.

"Now? Its moonhigh!?" Jayfeather stopped there, muttering to himself What? is it the extra extra extra late patrol time??

And just as slowly, Jayfeather heard noises from the corner of the cave.

As if a clock were following him.

and indeed one was.

Rock quivered there, in that spot, and yowled in a pitiful voice that only Jayfeather could hear.

"Leave now, Jay's Wing. Leave before the half moon or ELSE"

Lion's Roar stopped in front of a ragged cliff. No hint of exhaustion showed in his eyes, face expressionless.

meow growing higher and closer to shrill laughter every word he spoke.

Shaking from tiredness and worry, Jayfeather whispered his death.

Lion's Roar screeched, and leapt on top of him. Shredding his flesh.

slashing at his muzzle untill red covered the entire spire

ripping at his bones

clawing him to pieces.

Suddenly the stone crumbled under the weight,

. Lion's Roar leaned over the edge, calling out to his corpse.

This had happened twice.

Jayfeather had awoke twice with still-bleeding scars all over his pelt.

Shaking, he crawled out of his den area and stared down the mountain ...because how much is that jayboi in the windoooooow... >=3

Wispy shapes filled the air as the shadowy figure creeped up behind him..

"Really??! You think now is a good time??!!" Jayfeather snapped, surprising the shape which was apparently Lion's Roar.

Leaping on Lion's Roar, he pinned him down, black liquid dribbled from scratches on it's face. And suddenly the darkness was gone, and there was just Lion's Roar under him. No monster that tried to kill him, no evil that could never be stopped, just him.. "Hi Jay's Wing" Lion's Roar mewed feebly once Jayfeather was off him, obviously uncertain about what had just happened, what he had just done to me... Jayfeather thought angrily, though he was relieved to know who was attacking him, and how he could stop it. What if I can't stop it though? Jayfeather started to panic. What if I ACTUALLY die here??

Glittering waves shone in the stream, the waterfall cascading down the mountain, clouds drifting slowly in the horizon. Padding down to sit by Half Moon, Jayfeather for once considered Rock's vision, troubling thoughts swirling in his head like storm clouds amidst the bright light of day. How will I get out of here then? If you're going to yell at me, at least have a reason why! "Are you ok, Jay's Wing? You look stressed!" Meowed Half Moon, staring at him with her warm green eyes, persuading him that he needed to tell someone if he was going to solve this mystery, and that someone would be her.

of that thing thats teeming,

and suddenly a feeling,

the thought that I'm dealing,

ay's Wing(Author Note: yey i found my story flashcards now i can continuee even tho i did chapters 6 and 7 thro nothing aahh the cringe..)

Retrieved from "https://warriorsfanfic.fandom.com/wiki/For_A_Half_Moon?oldid=383998"
Community content is available under CC-BY-SA unless otherwise noted.