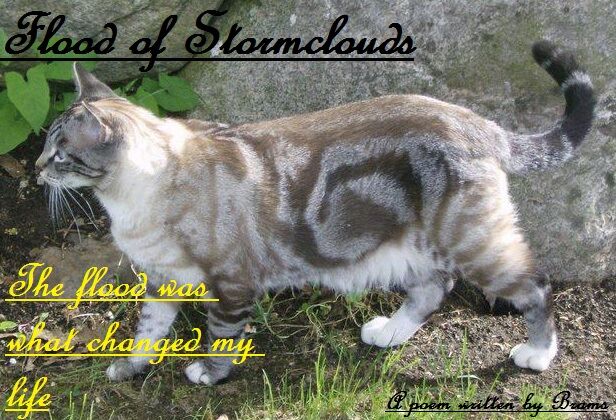 This is a poem by Brams. To read my other poems, click here and here.

NOTE: Read at your own risk if you haven't read Bramblestar's Storm - this contains major spoilers!

The rising waters rose around me,

Threatening to take me out,

At least I was inside,

Unlike my brother, without a doubt.

Sheltered inside, all alone,

The wild cats came to rescue me,

It was no trouble for them, it was their thrill.

Their camp, inside the broad woodland,

On the other side of the wide blue lake,

Made me wonder, despite the floodwaters,

Where my brother was - my heartache.

So one day, I fled back to where I came,

But that dark brown tabby followed me,

He helped me to find my brother,

He was dead - something I didn't foresee.

So the two of us went back, and I learnt their tactics,

And then, I knew, I couldn't go back again,

So I stayed, and was named again, for

The cause of the rising floodwaters - I almost refrained.

And then, under the full moon,

At the meeting, the floods nearly down,

The sixteenth code was introduced,

And as they cheered, I remembered the time my brother drowned.

Many moons later, when all was back again,

In the real camp, back to the real Clan,

I sat the final test,

And passed - I never needed to plan.

And as three of the fallen equaled me,

I overpowered them, now named twice.

That name would always hold a piece of my heart -

Stormcloud is my name - isn't that nice?

I love Stormcloud from Bramblestar's Storm <33333 <---- Partially because I love the name, but whatever.

This is the end of my third poem on WFW - I hoped you enjoyed it! Please comment :D

Links to my other poems are above.

Retrieved from "https://warriorsfanfic.fandom.com/wiki/Flood_of_Stormclouds?oldid=249344"
Community content is available under CC-BY-SA unless otherwise noted.