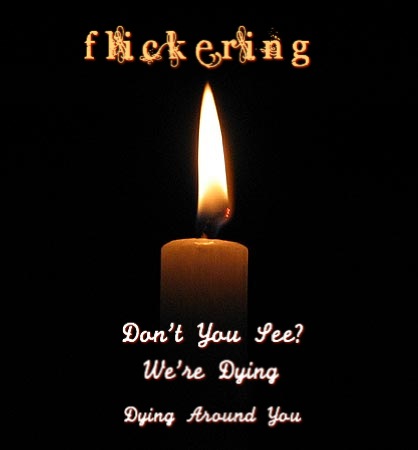 a collab by Brighty, Eevee, Firey, Red and Stormy

Thistlestep sniffed the night air. The scent of dying cats surrounded her, and she forced herself to focus. Cloverstar had fallen ill, showing proof that MoonClan was doomed.

The small rays of light shone through the trees, illuminating Thistlestep's gray and white pelt.

She was jolted out of her thoughts by the sound of coughing. A young brown apprentice was jolted out of the den before anyone else could breath in the sickness. Thistlestep limped over to the small tom. His body looked frail, and he was shaking in the cold air.

"Come Falconpaw. I'll take you to the fallen willow." Thistlestep mewed. The tom nodded, coughing too much to respond properly. As the two cats approached the tree, one of the elders mewed, "Thistlestep? Have you found something?"

Groans emerged from the den. "I'm sorry." Repiled the medicine cat. "But I've never seen this kind of disease before, and I don't know how to treat it."

A paunchy tom snarled. "That's what you always say! We're dying! Leafstorm hangs on by a whisker, and Lionpaw is flickering between life and death! Do you know how much agony this brings?"

Thistlestep shook her head. "It's not my fault! I didn't ask for a plague! StarClan knows what has brought this, and I don't know of a cure! Our ancestors are not speaking to me!"

The tom muttered to himself, then froze as one of the queens cried, "Falconpaw's coughing up blood!"

Thistlestep whipped around, as the golden apprentice went from practically puking blood, to shivering, despite the warmth of the den.

"Oh no..." Thistlestep murmured. "Petaldusk, keep him warm! I'll alert-" She broke off. Who could she tell? Cloverstar was almost dead, and Wolfclaw was faring no better. We don't have a cat to lead us.

Before she could let her fears get the worst of her, she turned around, only to crash into Wolfclaw, his yellow eyes weak. He was hot with fever, and he stopped to spew blood, before mewing, "It's Cloverstar. She's not breathing!"

Thistlestep's eyes flew wide, and pushed out of the willow, racing to the rocky crevice. Inside, the brown she-cat lay still, green eyes empty.

"She's dead..." Whispered Thistlestep. With one last glance at her leader, she jumped on top of her den. "Let the healthy cats gather! Cloverstar is dead!"

As the few healthy cats walked forward, they became nervous. "All cats with no symptoms of the disease are to leave camp, before we all die!"

Wolfclaw nodded, his voice trying to carry. "Go! Thistlestep will lead you!"

The she-cat froze. "No, I must stay here and help you!"

Wolfclaw's voice began to waver. "They will need you! Hurry!"

With one last glance at the camp, the few healthy cats MoonClan still had were racing towards the exit, eyes filled with fear.

MoonClan reached the edge of the territory, unable to cross into SunClan or WaveClan territory. Thistlestep made herself breathe calmly, knowing that she was the leader now.

"We will settle here for now. At tomorrow night's gathering, we will speak to the other leaders for shelter." She mewed, not comfortable with being the cat in charge.

She looked out at the crowd, trying to figure out what she'd be working with. For warriors, she only had Foxwhisker, Ivyleaf, and Frostflame. The only apprentices left were Owlpaw and Lilypaw. None of the elders were among them, and Thistlestep wondered how mahy would die in the night.

What am I going to do? I'm not a leader. I'm just a medicine cat.

Thistlestep looked at the stars, fear in her eyes. Please StarClan. Send us a sign.

Suddenly, a star crossed the sky, and words echoed in her head.

The sun and the moon will fight, as opposites do. The snow will be cold and distant. The waves will only think for themselves. We have a flicker of hope left, before all the Clans are consumed in fire.

Thistlestep gulped. "Will we make it?"

Flareshadow padded behind Darkstripe, the medicine cat of SunClan. The ginger warrior noticed that Darkstripe looked exhausted, but the Clan was faring well, with only a few cats sick. Why was he tired?

Flareshadow stopped beside Brightpaw, who was gazing ahead in confusion. Lightstar had lifted her tail high, and her deputy Fernleaf was yowling, "Quiet!" When the leader had every cat's attention, Lightstar cleared her throat and began to speak. "As you may know, the other Clans are ill with the mysterious disease that has sank its teeth into the Clans and refuses to let go."

Nods and murmurs rippled through the SunClan cats.

"So that is why none of you must go near any other cats. They might look okay, but they could have the sickness." Lightstar continued. Every cat was silent. "That is why we did not bring the elders with us." She flicked her tail. "Darkstripe," she went on, jerking the medicine cat away from his thoughts. "You will not go near the other medicine cats. Is that clear?"

She led the Clans down the ravine and the cats swarmed into the clearing. SunClan kept glancing at the other Clan cats, their eyes flashing with an emotion Flareshadow couldn't read.

When he looked around, he was shocked to see ragged-furred, skinny cats - SnowClan and WaveClan, he guessed, and only a few MoonClan cats. He was surprised to see any of these cats here at all. How they managed the walk here, Flareshadow didn't know.

As he took his place beside another SunClan warrior, he pricked his ears to hear dark mumbles sounding from the other Clans. They kept saying 'StarClan' and 'cure', making Flareshadow uneasy. Dark glares were cast at the SunClan cats, but before anything else could happen, a yowl sounded from the top of the Sacredrock.

It was not the MoonClan leader that had spoken, nor the deputy. It was Thistlestep, the MoonClan medicine cat. The grey-and-white she-cat's gaze swept over the cats. When Flareshadow glanced to the side, his fur bristled as he saw a little kit with its mother's tail wrapped around it protectively. Thistlestep meowed, "I will make my announcement last. Lightstar, you may go first." she stepped back, dipping her head to the SunClan leader.

Lightstar nodded and stepped in her place. "SunClan is faring well, despite the illness. We have isolated the sick, and the healthy cats are kept away from them to prevent the spread." Soft hisses and mumbles rippled through the watching cats, but Lightstar took no notice of them. "We hope to continue going on like this, and we wish for all of you to heal."

Flareshadow's claws dug into the ground as hisses of "Liar!" and "Faking it..." spread through the other Clan cats. A warm breath stirred his ear fur, and a mumble. "It's not worth it." Jayflight mumbled to him. Flareshadow's claws sheathed slowly. The older warrior was right.

As Lightstar stepped back, Blizzardstar looked worse than his SnowClan warriors. His bones showed through his thin and ragged pelt, and his fur fell out in clumps. Somehow, he managed to cough, "SnowClan is-" He was quickly cut off by a fit of hacking. Lightstar leapt away from him, her fur fluffing out. Thistlestep rushed forward and caught the leader before he could tumble off of the rock.

The grey and white she-cat ordered, "Blizzardstar, you can't report right now. Neither can you, Ripplestar." she added, turning to look at the WaveClan leader, who was looking shaky on her paws.

The cats of SnowClan and WaveClan leapt to their paws and screeched at Thistlestep. "You can't tell our leaders what to do!" More hisses and snarls of protest, and some broke off into fits of coughing.

Thistlestep let out a screech. "I must make my announcement, please!" The cats fell silent. "Cloverstar is dead. Wolfclaw is barely alive. All other cats are sick. Please, I need to find a shelter for the healthy cats." she urged.

Lightstar looked at her, suspicion in her pale green eyes. "How do you know they're not sick? How do we know you're not sick?"

"Please, Lightstar! None of my cats are ill! Are any of us breaking into fits of hacking?" Thistlestep stepped toward Lightstar. "Let us take shelter in your Clan. Please."

The medicine cat looked startled. But she wordlessly leapt off of the Sacredrock and spoke in a hushed tone to her cats. Flareshadow's ears angled toward the MoonClan cats, trying to pick up parts of their conversation.

A queen, the one with a kit, mewed, "A sign? From StarClan?"

An apprentice looked worriedly at Thistlestep. "So... they haven't abandoned us?"

Thistlestep sighed. "We need healthy cats to go on a journey to find a cure." She seemed to be talking to herself. "But who...?"

A... a sign? A journey? Flareshadow was snapped from the conversation by Jayflight, who nudged his shoulder. "World to Flareshadow." he growled. "We're leaving. C'mon." The silver tabby got to his paws.

Flareshadow glanced over at MoonClan, who had possibly dispersed into small groups, two or three still there, including Thistlestep. The others had probably gone to find shelter.

But Lightstar would usually help anyone who asked. What pressed her to turn down MoonClan? Flareshadow glanced over his shoulder again before following his Clanmates up the ravine.

Ivyleaf stepped carefully through the undergrowth, warily glaring at the shadows surrounding her defeated Clan. I can't believe they just pushed us away! We only wanted a place to live... Sighing, Ivyleaf dropped her head.

She shut her eyes, remembering her poor brother that was ill. Ivyleaf was scared that he would die just like Cloverstar. Thistlestep hadn't been able to reassure Ivyleaf that Stormpaw would be fine.

She was terrified about the survival of MoonClan. Ivyleaf stumbled behind Thistlestep, trying to concentrate on moving onwards.

"We must go ask SnowClan." The medicine cat mewed. "WaveClan seems weak and their leader is dying. We should not intrude on that. SnowClan is slightly better, but at least we won't be as vulnerable to the illness as we would be in WaveClan."

Ivyleaf nodded and continued onwards behind Owlpaw. The presence of Owlpaw reminded Ivyleaf of her playful brother. "Do you miss him?" Owlpaw murmured.

The brown apprentice sighed. "I miss him too, he was my best friend." Ivyleaf prayed to StarClan that he would be okay in the camp, with no one to take care of him.

"I hope he's alright." She whispered.

Owlpaw only pressed reasurringly against her. "I just wish that SunClan would have agreed to help us. Why was Lightstar so selfish?"

Ivyleaf didn't have an answer for the young apprentice. She dipped her head and kept walking, fearing that she would collaspe in exhaustion. "We're here!"

Relieved, Ivyleaf lifted her head. "We're here?" But then she smelled something strange... She glanced behind her, but only Frostflame was taking up the rear. Who was it? The smell seemed to fade away, but Ivyleaf swore that she smelled a rogue nearby.

Foxwhisker glanced edgily around. "Are you sure SnowClan will accept us? I mean we're not even a Clan anymore!"

Thistlestep sighed. "We can only hope."

When they entered the SnowClan camp, cats were staring at them eagerly and curious. Ivyleaf spotted Mintfoot, the tom that stayed to himself most of the time. She stared at him for a moment, then looked away. She could see that he was intelligent, but he stayed away from the others. Shy.

"We ask for your help, Blizzardstar. SunClan has refused to help us, and we seek a good home for our healthy ones." Thistlestep dipped her head.

Ivyleaf prayed that they would be accepted.

Retrieved from "https://warriorsfanfic.fandom.com/wiki/Flickering?oldid=236833"
Community content is available under CC-BY-SA unless otherwise noted.