a story by rainy 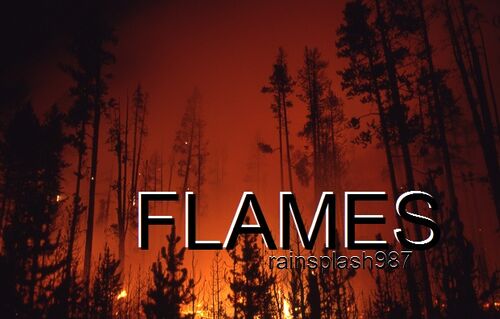 i. the death of dove

< I remember when your head caught flame

It kissed your scalp and caressed your brain >

MY NAME IS Phoenix. I am born of fire and I live by flames.

Once upon a time, I was not alone. I had a family. When I was very little, I had parents. They died shortly after my little sister was born, and the both of us moved in with our grandparents, River and Crow.

My sister's name was Dove.

I'm not here to play pretend. I know you already know where she is right now. Six feet underground, right? But you don't know how she got there.

She died in late greenleaf. A beautiful day, sun out, flowers nodding in a gentle breeze. We hunted early so that we'd have time to play by the brook before sunset. River made me promise to watch her and protect her, like he always did before we left the den--unnecessarily, for I would do anything to protect my baby sister.

He had reason to be worried, though. The woods are a dangerous enough place as it is: foxes, badgers, weasels. But ours were more dangerous than most, because of us.

They called themselves the Blood Brigade. They were, technically, kittypets--cats who lived in the Twolegplace. Crow, my grandmother, always said that Twolegs were the most cunning, cruel creatures to live on the planet, and I think they passed this on to their cats. The Blood Brigade was made up of cats who thought us woodland cats were wild and uncivilized: inferior.

At first we laughed at this. Just a bunch of soft kittypets, right? They'd never hunted for their own food, never lifted a paw to accomplish anything.

We underestimated them. They're smart. Much smarter than us.

We were divided. Every family of cats in Fire Wood knew each other, but we weren't united. Not like them. We were no match.

Before long, a quarter of the cats who had lived in Fire Wood were dead.

That was it. Surrender before the war began. We succumbed to the Blood Brigade's demands--prey, territory, and total control over us--so that our families could keep their lives.

That's easy. Blood demands blood. To effectively fight the Blood Brigade, the Fighters resorted to horrific measures. Crow and River forbade us from talking to the Fire Fighters: nothing could validate their actions in my peace-loving grandparents' eyes. They didn't care if the Blood Brigade wanted power, as long as their granddaughters were safe.

Keep us safe. Crow and River's daughter, Tulip, my mother, was the light of their lives. They tried to keep what was left of her--Dove and I--alive. They would do anything for us.

Back to that fateful greenleaf day. When Dove and I were done playing in the brook, we headed home. A small dugout cave in the side of a hill. We ate supper with Crow and River, laughing and exchanging stories. We fell asleep in a heap, Dove with her head tucked under my paw, her warm white pelt pressed close to mine.

When I woke in the middle of the night, the dugout was filled with smoke.

The fire came with astonishing alacrity. Fire Wood was, as its name suggested, a forest of kindling, and it went up with gusto. The flames were at our doorstep in a matter of minutes.

I screamed and began shaking my family awake. River was unconscious; Crow helped me drag him out of the dugout. I left her to try to revive him, and I woke Dove, dragging her out.

Heat scorched our pelts. The familiar woods were now the color of my ginger pelt. Smoke poured into the sky. The wind whipped embers into my eyes. My throat burned and my eyes streamed tears. The fire roared everywhere I could see, an irresolute monster desperate to devour.

"Head for the brook!" screamed Crow.

We ran, blind with fear. I pushed my grandparents along, ignoring River's cries of pain as I forced him to run on his bad leg. The smoke was everywhere; I couldn't see where I was going. I heard Crow up ahead, yelling, "The brook! I see it! Come on, we're almost there!"

I looked around. River was scrambling to catch up with Crow.

I knew in an instant what must have happened. My little sister had gotten lost, wandered off in the wrong direction in the burning woods.

I didn't bother telling my grandparents; I knew it would only be a waste of precious oxygen, and they probably wouldn't hear me anyway. Spinning so fast that dirt rocked out from under my paws, I raced back into the inferno.

"DOVE? DOVE!" I screamed her name over and over again.

It seemed that eons passed before I heard an answering cry, weak and paltry over the roar of the flames.

I felt like a cat tortured beyond recognition. Every pawstep was agony; it felt like my blood had turned to fire and I was being burned from the inside out. But I had to reach her.

A flicker of white appeared at the edge of my vision. I turned and saw her, my baby sister, the little she-cat who kept my heart guarded with those big, thoughtful brown eyes of hers.

She saw me at the same instant. The terror on her small face was replaced by relief, and she began to run towards me.

I will never forget this moment.

The smile on Dove's face, the light in her brown eyes. The pattern of the flames' shadows on her white pelt. Her name on my lips.

The strange, keening scream the burning branch made as it cracked off the tree. Like an enormous, flaming claw. Down to Earth. Down, right on my sister.

She went up in flames.

< well you laughed, baby it's okay

I woke up in a patch of dirt, a few miles from the fireline. For a few minutes, I just lay there. My mouth tasted like ashes. The sky was still full of smoke. The forest smelled like dead things.

The entire day was agony. My skin was blistered, puckered and pink and oozing blood along my legs from racing through burning brushwood. I alternated between lying in the dirt, bleeding and feeling sorry for myself, and punching a nearby tree till the blackened bark fell away.

By the time night fell, my right front paw was aching, bruised, and cracked, and I had broken two claws. I knew inside that there was a better way to deal with anger than punching trees, but I couldn't think of it.

I was a mess. My brain felt like jelly, my heart like stone. Tears ran down my face and mingled with the ash that had blackened my fur, turning to a soupy gray sludge that dripped onto the floor between my feet. The smell made me gag, and I vomited behind a log.

I was hungry, but my stomach ached and I was sure I'd throw up again if I tried to force anything down. Not that I could find any food.

I could go to the brook and try to find my grandparents. But all I could think of was Dove. Around midnight, still sleepless, I felt the irrational urge to go racing through the woods shouting her name.

As if the ashes would yield their ghosts. As if I would see her, shining with hope, and she would walk towards me and give me back the piece of my heart that had fractured when that branch had fallen.

"Please," I begged, around two hours past midnight. Didn't know who I was talking to, because there was no one listening.

Throat parched. Body on fire. I felt like I was dying.

The sun was rising by the time I dragged myself to the brook. I drank like a crazy cat, then submerged myself in the brook, revelling in the cool water on my wounds.

The air still smelled like dead things, burned and now rotting. I pushed my muzzle into the water and inhaled. My nose stung so badly after that that I couldn't smell anything, which was I wanted.

There was no sign of Crow and River. I didn't know where my grandparents had gone; I could only assume they were searching for me. Possibly for Dove, if they didn't know what had happened to her.

They must be so worried. Must think me dead.

Retrieved from "https://warriorsfanfic.fandom.com/wiki/Flames?oldid=287924"
Community content is available under CC-BY-SA unless otherwise noted.