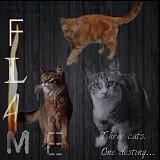 [in case anyone was wondering why I want some one to adopt it is because I don't like the plot anymore. The adopter can do anything with this page.]

"Three cats would rise from the ashes,

One of water, two of fire,

One would die from it's clashes,

The other two would hold the fate,

the fate of the world in their paws."

This show airs every Tuesday.

Rise from the Ashes

Willow gives birth to three kits, Dying Cinders, Withering Mist, and Small Flame. Together they have a destiny that will destroy or save the existing world for them. They discover other friendly or not so friendly cats. This episode shows the beginning of the kit's life and the challenges and the risks of being a wild cat.

Half moon later, the three is in Nameless. They learn how to keep ignoring the taunts of others, 'cause they aren't forest born. Changes happen. But Dying Cinders get a dream and that changes their lives forever.

Escaping from the Dark

Escaping. After the dream Dying Cinders got, the three decide that it was best to avoid cats for a while but that was before a small kit was born to a queen called Dark. But when he turns out to be a fighter from the start and a omen from Little Deer, it seemed like it was for the best to move out.

The three come back to Nameless again when the cold leaf bare sets in. It is colder than ever and they discover a cat in the season, a small rogue named Winter.

When Winter decides to join Nameless, things get somewhat complicated with the decision to either let her in… or not.

Another prophecy arrives from Hollyleaf aka Dancing Stars. Small Flame gets terrified by the prophecy because they think that it is stating Small Flame's death, perhaps very soon.

Fight to the Finish

Leopard suddenly hates Small Flame for some reason and as a result, Leopard starts an all new fight with him. Sometimes physical, sometimes verbal. But one ordinary day, something surprising happens that clicks in part of the prophecy.

Withering Mist and Dying Cinders are investigating the true reason why Leopard hates Small Flame all of the sudden. But when Leopard discovers that they are search for him, decides to fight them.

After long seasons of being in the wild, Withering Mist and Dying Cinders come back home; this place called home is Nameless. But Nameless disappears all of the sudden and they must discover what had happened to it.

Out of the Fog

It is time for the prophecy to be fulfilled. It is time. But what is the enemy? They still have a vague sense of what they are doing so they are doing what ever they could do to be out of the fog.

Please note that poll 4 don't really make sense because they are for later chapters and seasons.

Please answer these polls. I am always looking for feedback and every vote counts!

Retrieved from "https://warriorsfanfic.fandom.com/wiki/Flame?oldid=247996"
Community content is available under CC-BY-SA unless otherwise noted.