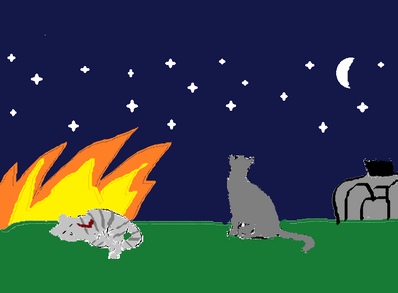 This is the third book in the FireClan Series.

"Are you sure this is okay?" Dawnpaw repeated for the thousandth time. Rainsplash gave her apprentice a reassuring smile.

"Don't worry about it, Dawnpaw. These are on Blackstar's orders. Besides, DarkClan needs our help."

Ashfoot turned to give them both a silencing glare. She was poised tentatively on the border of her old territory, listening for any blood warrior patrols. Usually, this would be a bad thing, but the FireClan cats wanted a couple of blood warriors to stop by. So they could kill them.

Next to Rainsplash, Infernoclaw worked his long claws into the ground, getting himself ready for battle. She sniffed the air, waiting for the telltale foul scent of a blood warrior.

"What if they don't come?" Dawnpaw asked out loud.

Suddenly, before she could answer the apprentice's question, Rainsplash picked it up. The smell. "Get down!" she hissed. The four cats ducked beneath a large hazel bush, eyes wide with apprehension. A few minutes later, just when she was beginning to think she was wrong, Rainsplash saw them. Two blood warriors, side by side, eyes alert and jaws laden with prey. Despite the obvious evil in their eyes, she felt her belly clench. She was about to kill cats. Wasn't that against the warrior code? Shaking away her doubts, she reminded herself that a true warrior would also do anything for his or her Clan. Anything.

As the blood warriors sniffed the border apprehensively, Ashfoot began creeping forward slowly, Infernoclaw at her heels. The gray-and-white she-cat signaled for Dawnpaw and Rainsplash to go around the other side, so they could trap the enemy cats between them.

Nodding to show she understood, Rainsplash led her apprentice around the left of the two cats, her eyes trained on her targets. Just then, one of the blood warriors, a large brown tabby called Crusher, raised his head and opened his mouth to yowl an alarm.

He never got the chance.

Ashfoot was on him in a charcoal-colored blur. "Attack!" Rainsplash screeched, diving on top of the she-cat next to Crusher.

Her opponent was strong, but once Dawnpaw joined in, the white cat was outmatched. Just as she was about to let the cat- Ghost, she believed her name was- free, Rainsplash remembered with a jolt what they were here to do. Her apprentice seemed to realize it too. The violet washed out of her eyes, leaving them bleak and gray with horror. "We... kill her."

Helplessly, Rainsplash nodded, numb to the feel of the white she-cat's claws as she writhed in a desperate bid for freedom. "I- I'll do it." She couldn't bear Dawnpaw having to do such a gruesome task at such a young age. No apprentice deserved that.

Aware that Ashfoot and Infernoclaw had already shredded Crusher and left him lying limp, Rainsplash fastened her jaws on her enemy's throat and bit down, feeling life-blood explode in her mouth like a plea to stop. But she didn't. She couldn't. It was too late.

"Are you okay?" It was Stoneclaw, his eyes sympathetic and warm.

She turned away, still shuddering from the feeling of warm, sticky blood filling her mouth, and the sickening taste of fur and turn flesh. How am I any better then Bloodstar? Is DarkClan worth this?

Her former mentor nudged her gently. "It's okay Rainsplash. You did what needed to be done."

Raising her head, she met his gray eyes hopelessly. "But at what price?"

He shook his head gently, and she knew he had no real answer to that. "We must follow our hearts, and the warrior code. Sacrifices are always in order. But they're worth it." He laid his tail on her back. "I trust Blackstar, and I believe he wouldn't make FireClan cats do something he wasn't willing to do himself, or something that they couldn't handle."

Rainsplash nodded weakly, then got up. "I think I'm going to take a little rest," she said softly.

However, as she made her way to the warrior's den, a cat intercepted her. Her eyes traveled up the tortoiseshell markings, till she was staring into a clear pair of light amber eyes. "Hi Cinderflower," she said without any enthusiasm.

The words barely registered. "Sorry for what?"

Cinderflower shuffled her paws. "For getting mad at you when you tried to tell me not to see Glazefoot. I-" She looked regretfully up at the sky. "I can't stop seeing him. That's one thing I can't promise you. But... I was wrong to get so angry."

Despite her misery, a warm feeling coursed through Rainsplash's veins. She leaned forward and touched her nose to her sister's shoulder. "It's okay. I was a bit too overbearing as well. I didn't try to understand. I just didn't get how you could fall for a tom like that, and be willing to risk so much."

There was wisdom in Cinderflower's voice as she mewed, "Someday you will love a tom, and you'll understand."

Rainsplash snored. "I doubt that. No tom could make me feel like that."

And she was sure she was telling the truth.

"What are you doing, Stoneclaw?"

Reading the expression on his face, she laughed and bumped her flank against his. "Sure, I'll volunteer. Can Cinderflower come too?"

He nodded understandingly, beckoning the tortoiseshell she-cat over with his tail. "Of course. Can you guys take Blazering as well?"

Dipping her head at him, she called to the young ginger tom, who was sharing fresh-kill with Thrushwings. He got up and trotted towards them, and the three cats exited the FireClan camp. Rainsplash automatically headed towards the DarkClan border; the other Clans weren't half as much of a threat.

It's not DarkClan that's the threat, she reminded herself. It's the blood warriors.

Still, there was no denying that the DarkClan warriors - most of whom had been battle-crazy before Bloodstar anyway - didn't all seem to mind the blood warriors. There were a good few, such as Glazefoot and Ashfoot, but there were also ones like Darkclaw, who would do anything for a fight.

To separate the good from the bad, Rainsplash realized, FireClan would need help. They couldn't do it on their own. And with Quakestar angry and Windstar undecisive about nearly everything...

A weight settled on her chest. She had no idea what they were going to do.

With a sigh, Rainsplash watched the moonbeams slicing into the warrior's den. They cut a hot-white path through the myriad of pelts and illuminated her Clanmates clearly. Physically, she was exhausted, but her racing mind wouldn't allow her the luxury of sleep.

Pushing herself to her paws, Rainsplash trotted out of the den and out into the FireClan camp.

Outside, the air was cool and refreshing. It felt good, and relieved some of the weight on her chest. Not much though. Worry still shadowed her infuriatingly. She felt like she was constantly running in circles, or beating her head against a wall. Getting nowhere. Wearing herself down.

Lightly, she padded to the foot of the rock-pile, where Blackstar slept. Was the leader sleeping peacefully? Or were his dreams filled with nightmares, and visions of a Clan going up in flames.

Feeling lonelier then she'd ever thought she could in a Clan, Rainsplash sat down on the soft earth and gazed up at the sky for what felt like a few minutes, but was probably much longer. It was so quiet that the softest night noises stood out.

That was why, when she heard a twig snap in the brush, she was alert immediately.

The sound of whispering confirmed her suspicions. "FireClan!" she yowled, as loudly as she possibly could. "We're under attack!"

No sooner had the warning left her lips then the first DarkClan warriors leaped into the camp. Rainsplash raced towards them, knowing that she had to hold off any camp entrances as best she could. But it was a futile attempt for a single cat. The best she could do was avoid getting stampeded.

One thing she had to be grateful for was that there was no cream-and-ginger pelt among her enemies. Cinderflower and Glazefoot wouldn't have to face each other in battle... tonight. In fact, most of the cats were blood warriors. Only a few were DarkClan cats, the scum like Darkclaw who were always itching for a fight.

"Rainsplash! I've got these two! Go hold off the entrance!" Sootfur had emerged from nowhere, along with several of her Clanmates.

Determination and adrenaline kicked in.

This wasn't a fight they could lose.

Retrieved from "https://warriorsfanfic.fandom.com/wiki/FireClan:_Sweeping_Blaze?oldid=188955"
Community content is available under CC-BY-SA unless otherwise noted.