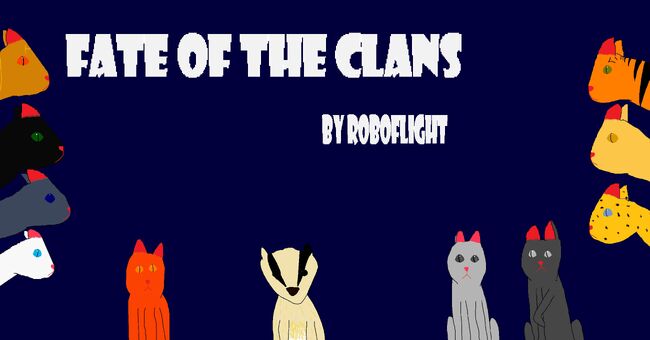 Everything the clans have fought for, is at risk, as four clan cats must oppose the threat of change. Thunderpaw, Riverpaw, Breezepaw and Shadowpaw have the power to save the clans from an outside threat. They will have to fight against all odds, only to question their motives and if they really are fighting for the right thing. These four cats must determine the fate of the clans.

Birth of Hope: Four kits; Breezekit, Thunderkit, Shadowkit and Riverkit, start their journey as apprentices, but they will soon discover, that their path will be more challenging then they could have ever expected, as each cat must face a growing trouble of their own.

Legacy of Change: Three cats; Lion, Tiger, and Leopard don't belong with those around them. They must take a journey, to lands they have never seen before, and discover the destiny laid out for them. But as they face struggles, and make life-changing choices, the three cats will soon discover they are not who they think they are.

Decision of Stars : Star and Dark are born to the skies, as counter parts of a cat in the forest. As the two cats are trained in the ways of the cats around them, they become unlikely friends, as they discover that they have more power than any other cat in the forest. Together they make a decision that could change the stars.

Story of Sky : Skykit's path is filled with doubt and choices since the moment she is born. But as she grows and becomes one of the greatest cats in Skyclan she must make a fatal choice, relying on all of her past experiences, to make sure that it doesn't ruin her clan.

Promise of Leaders: Thunderclaw, Riverheart, Windstorm and Shadowpelt continue their journey to greatness, but they soon lean that there is more to each other, than what there seems. In the meanwhile, a fading badger is out for deadly revenge.

Fate of Clans: The final battle approaches, and no cat is left without a side, as descions must be made, battle lines must be set and journey's must be completed as the past, present and future finally reveal themselves and their ties to each other. As the greatest of cats reveals something that shakes them all to their roots, the Fate of the Clans shall be revealed.

Retrieved from "https://warriorsfanfic.fandom.com/wiki/Fate_of_the_Clans?oldid=173505"
Community content is available under CC-BY-SA unless otherwise noted.