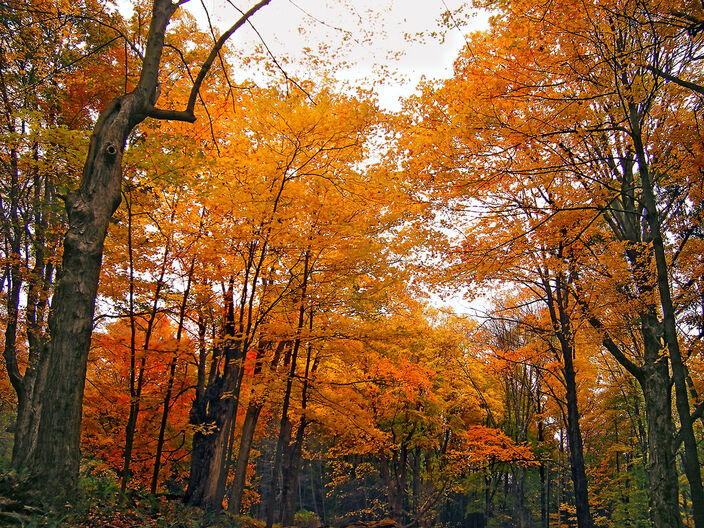 Two newly apprenticed littermates sat side by side in the center of a sandy clearing, the setting sun warming their backs. The other warriors and kits of CreekClan were receding into their dens, yawning and dragging their paws on the dirt. Moments passed and the camp was silent. The two never seemed tired. They burned with an energy beyond what the others knew was possible.

"Is this what you wanted?" One mewed, a dark brown tabby. "Being a medicine cat apprentice?"

"I don't know," The other, a beautiful tortoiseshell she-cat, mewed. she gave her shoulder a few licks.

"What about our dreams of becoming warriors together?" The brown tabby whispered, gazing at the tortoiseshell with sad green eyes. "We were going to hunt together and go on missions. Remember? We acted it out every day!"

"I know, I know..." the tortoiseshell said with a sigh. she paused and then meowed, "I put my life in the paws of StarClan. If this is what they wish for me, then so be it."

The tabby tom took a deep breath. His sister always spoke with wisdom beyond her years. He wished he could be like that.

"We'd better get to sleep," the dark tabby mewed, glancing behind him. There was only a small sliver of light peeking above the horizon. The tortoiseshell nodded.

Sprucepaw watched Maplepaw pad slowly into the medicine den. He sighed and turned around. Only a faint yellow glow was visible. Crickets chirped and lightning bugs illuminated the treetops. He looked into the empty apprentices den and slowly approached it. He curled up on a cold moss nest and tried to clear his mind, his arms wide open to sleep.

"We will be traveling with Sprucepaw and Russetcloud to tour the territory," Hazelwhisker explained. "While they discuss the best hunting spots, I'll show you the best places to find some common herbs."

Maplepaw perked her ears, excited to do something with her brother. "When are we leaving?"

"As soon as you're ready!" Hazelwhisker purred. She licked her chest and padded out of the den.

Maplepaw yawned and stretched. She spent a few minutes grooming herself before joining the others in the clearing. Only a few other cats were awake, and the camp was very quiet. Maplepaw wondered if this is what it was like to be an a morning patrol. Hopefully she wouldn't have to get up this early every day.

Maplepaw spotted Sprucepaw near the fresh-kill pile, looking drowsy and eyes dull from sleep. He was clearly dozing off. His mentor, Russetcloud, padded to his side, murmured something Maplepaw couldn't quite hear into Sprucepaw's ear, and joined Maplepaw and Hazelwhisker at the camp entrance. Looking more alive, Sprucepaw followed.

The four cats padded out of camp and into the woods. Maplepaw lifted her muzzle, taking in the scents of the forest. She had forgotten what it felt like to be outside of camp. She had only been once before. She looked back on the memory fondly- Her and Sprucekit, no bigger than a plump hare, slipping through the bramble walls of the nursery while Ivymist was busy talking to Blizzardstar. They bounded in and out of the underbrush, tumbling and tussling in a play fight by the creek. The forest looked a lot different than she remembered, Perhaps because it was Newleaf when they escaped. Now the world was nearing the end of Leaf-Fall, and the forest was bright with oranges and reds.

The cats followed a clear dirt path that had clearly been tread by many generations of CreekClan cats. They walked in silence, dried leaves crunching beneath their paws. The ground became marshy and soft as they neared the creek. Soon, Maplepaw could hear the soft sound of rushing water.

The trees opened up into a clearing that bordered the stream. The land dramatically sloped downwards into a rocky riverbed. The once-rough stream of water has slowed to a trickle. Across the river basin laid a large fallen birch tree, the only visible passage across the creek.

Hazelwhisker padded up to Russetcloud and sat beside him. “It’s a great place to find borage and alder trees,”

Sprucepaw didn’t seem to be paying attention. He was staring down at the creek with an expressionless look on his face, yet Maplepaw could tell exactly what he was thinking.

“Are we going to cross the creek?” Maplepaw asked, not taking her eyes off of Sprucepaw.

“No,” Russetcloud said sternly. “The passage leads to MoorClan territory. To pass is to break the warrior code.”

Sprucepaw did not move his gaze off of the Birch Passage, however. He stared at the other side almost longingly. Maplepaw tried not to overthink it. He’s probably lost in a daze, she thought. We did wake up early.

The rest of the forest tour went similarly. They traveled to the western corner of the territory where there were fewer trees and to the Eastern corner where a huge lake lay at the end of the creek, and then behind the camp where the forest grew dense, bordered by the Twolegplace. Maplepaw was surprised by how little Sprucepaw seemed to care.

When the group reached the camp, it was already past sunhigh. Every cat was seated in groups talking and sharing tongues. Cats shared food and groomed each other. It was always a cheerful time of day.

Maplepaw dragged two mice out of the prey pile for her and Sprucepaw to eat. Russetcloud motioned with his tail for Maplepaw to sit by him, Hazelwhisker, and the deputy, Smokefur. However, as soon as Maplepaw sat beside her mentor, Hazelwhisker perked her ears and sprinted towards the leader’s den. That is when Maplepaw realized that Blizzardstar wasn’t in the clearing with everyone else. Maplepaw glanced at Smokefur and Russetcloud. They didn‘t seem to notice Hazelwhisker leave at all, so Maplepaw tried not to question it and took a bite of her mouse.

Sprucepaw approached the group and took his place in between Russetcloud and Maplepaw. Maplepaw moved closer to her brother. “The forest was nice, wasn’t it?”

Sprucepaw shook his head as if to clear his mind and met Maplepaw’s gaze. “It was beautiful.“ He paused and then added, “I want to cross the Birch Passage someday.”

Maplepaw narrowed her eyes. Before she could respond, Hazelwhisker reappeared and continued her meal beside Russetcloud. All attention turned towards the grey medicine cat.

Smokefur looked troubled. “Will he be okay?”

”I think he has whitecough,” Hazelwhisker responded, lowering her head. “But I’ll keep it under control. He will be fine.

Maplepaw gave a sigh of relief and turned towards Sprucepaw. He was licking the last pieces of meat off of the bones of his mouse. The sight made Maplepaw’s mouth water, and she finished her mouse in a few desperate gulps.

It had been a moon since Sprucepaw started his training, and he was already starting to get used to hunting. Russetcloud was an excellent mentor. He woke Sprucepaw up every morning and gave him challenging missions. It was hard work, but Sprucepaw learned fast. The only thing that would make his training better, he thought, would be doing it all with Maplepaw.

Instead, his sister rarely ever left camp. Hazelwhisker left to collect herbs while Maplepaw stayed in her den, organizing herbs and tending to Blizzardstar's worsening cough.

Sprucepaw lifted his muzzle. His mission was to catch at least 5 pieces of prey. If he could find one more, he would have his fifth.

Sprucepaw instinctively dropped into a crouch at the first trace of prey-scent. He crept towards the fresh, mouthwatering scent until he spotted his game- a plump orange squirrel, stuffing some acorns into its mouth beside a colorful oak. Sprucepaw shifted his weight onto his haunches and swiftly leapt into the air, landing squarely on the squirrel. It shrieked as he grasped it between his paws, digging his claws into its juicy flesh. With one deep bite, it fell limp.

He glanced up at the sky. It was still early. Sprucepaw had some time to relax before returning to camp, and Sprucepaw knew exactly where he wanted to go.

Sprucepaw covered his squirrel in dirt, planning to pick it up on his way back to camp, and darted into the underbrush. He found the dirt path and followed it through the territory until he reached the Birch Passage.

Sprucepaw slowed his pace. He looked down into the creek to see his reflection staring back at him. Then, he looked up at the other side of the creek. MoorClan territory had far fewer trees than CreekClan. He could see no more than ten, and each tree was thin, tall, and isolated. Sprucepaw could see miles of rolling hills and then Highstones in the far distance. The moor was covered in dry grass twice as tall as Sprucepaw, dotted with heather and weeds. Sprucepaw didn't want to admit it, but something about the place pulled him in. He had a burning sensation of longing, like a kit to his mother, and it pained his heart as he forced himself to step away.

Before he could turn his head, however, Sprucepaw spotted it- a cat. A she-cat, he could tell. A dark tabby, sleek and thin with sharp blue eyes, staring straight back at him.

The longing tugged at Sprucepaw more than ever now, but he was paralyzed, caught up in the moment, unable to move. When he finally set himself straight, it was too late- the she-cat was gone.

Fallenpaw darted through the heather, rushing back to the MoorClan camp as fast as her body would let her. She was shocked. She could hear Owlcry and Redwhisker behind her yelling “Fallenpaw! Fallenpaw!” but she could not bring herself to confront them. She could hear the blood pumping through her ears and a thump with every pawstep against the ground.

She slowed as the camp came into view, a clearing in the grass surrounded by short trees and dead shrubs. Fallenpaw could see the MoorClan cats’ ears perk as Fallenpaw bounded into camp. Owlcry and Redwhisker followed close behind and stood by Fallenpaw’s side at the camp entrance. The warrior standing guard, Coppertail, was pressed against the side of the camp wall, clearly surprised by the sunhigh patrol’s scene.

All eyes were on Fallenpaw now. Owlcry turned towards Fallenpaw. He mewed something that Fallenpaw couldnt enterpret; the squirrel in the deputy’s mouth muffled his voice. Reading Fallenpaw and Redwhisker’s baffled expressions, the brown tom spat out the squirrel. “Are you out of your mind?!”

Retrieved from "https://warriorsfanfic.fandom.com/wiki/Fallen_Maple?oldid=345937"
Community content is available under CC-BY-SA unless otherwise noted.