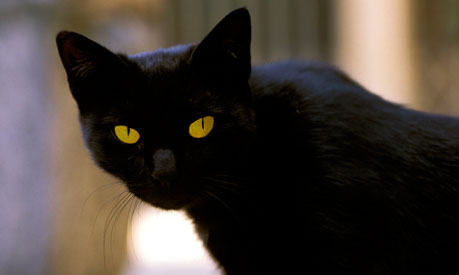 "S-Scourge is that really you?!" a black tom meowed in astonishment.

"Yes, it is, Fang, now listen: before I can rest in peace there is one thing I must get you to do. Begin the quest of dread." The black cat with one white paw spoke.

"But Scourge, I don't even know what the quest of dread is how could I possibly do it?" the black cat hissed.

"Not all BloodClan cats went to Darkpath. Those who have joined BloodClan because it was their last option or have a terrible past may join a place called the Mountains of Dread. In the mountains, there is a huge source of pure evil and you are the only one who can stop it! Your BloodClan ancestors chose you because you have a power unimaginable! You have the power to stop the Darkpath cats from taking over the Mountains of Dread!"

With a hiss, the black and white tom dissapeared.

Fang froze in horror as the pack of dogs chased him and his brother through the alleyway. By the sudden ferocity in his brother's bright blue eyes, he could tell that he wanted to stay and fight. The two worked in a team to fight the dogs. Before he was about to do the killing move, his brother went in front.

"What in the name of Darkpath are you doing?!" He heard his brother cry.

Fang heard a wail as he slashed his throat.

"Claw, I must kill you - it was this dog that killed our mother, I never want to protect it. By the way, Claw, you brought only misery when you led BloodClan!"

He raked his belly with his long, sharp claws.

"Wai-" With a thud, Claw landed on the ground.

Fang lapped at his brothe'rs fur. I didn't need to end this way! He could have been living. He had a passion for blood power and dread. He would go to Darkpath and plot there with Brick and Bone and other cats. This is all part of the quest of dread Fang heard Scourge whisper. He whipped around only to see, nothing.

"Why me, Scourge, why?" Fang's wail filled the night.

His whole Clan came running. "What happened? Where is the dog pack? Why is blood on your fur? Is everything okay? Is that Claw's body on the ground? That means you're leader, congratulations."

"The dog pack got him and slayed him. The blood on my paws, it the dog who killed him's blood. I will not get my nine lives from Darkpath after I sit vigil over his body." Fang replied. Sometimes the truth is not the best, he thought.

Fang followed a path of blood in the sky leading to a cluster of mountains. Black mist came from the biggest Mountain making the cats screech in pain. It wrenched their hearts leaving them dead. A cat stood on top of the mountain laughing as the cats despratly tried to cling on to their lives. One of the spirits was Scourge. "Scourge!" Fang cried. "Fang...It's no use...." Scourge rasped. Scourge closed his eyes and grew still.

Retrieved from "https://warriorsfanfic.fandom.com/wiki/Dread?oldid=219024"
Community content is available under CC-BY-SA unless otherwise noted.