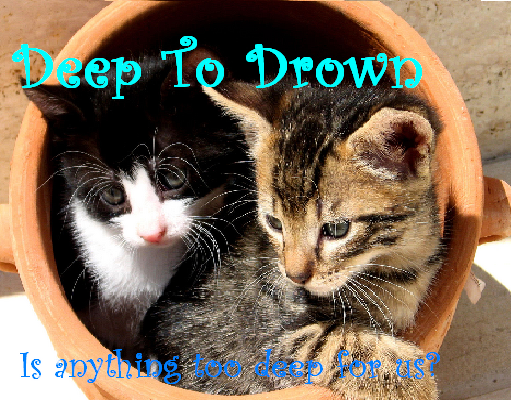 She didn't know what happened. One minute, all was calm, the next, the roaring world, so different then anything she'd known before. It was sudden. In that horrifying way that said you can't stop this. You never will.

Iceflight gazed at the lake. The calm surface was disturbed, waves kicking up higher and higher. Iceflight, a new warrior, flattened her ears against the rain and the howling wind. She decided that she shouldn't be there. She was ThunderClan, not RiverClan. Those weirdos loved being wet. Iceflight couldn't understand why. Sighing, she went toward camp. Tonight was a Gathering. She wondered if it would be put off because of the rain.

She waited for Shinestar to finish the Gathering patrol. He was almost done, when a strange sound was heard. The creaking of the entrance. Cats turned their heads.

"What was that?" They murmured.

A small trickle of water formed at the entrance. The pouring rain made it swell, gathering puddles in the camp. Cats backed away, frantically trying to climb the walls as the water swelled, growing until it lapped at Iceflight's paws, steadily climbing up them quickly. She stood rooted to the spot, too afraid to do anything else.

Then, the entrance burst.

The lake- The lake! Had the rain done that much damage? swirled into the camp. Yowls were drowned out as the water swallowed the camp, along with the cats. Iceflight expected to be with them, but no. Her long fur helped her float, and she was carried to the top, where she hauled herself out. Panting, she lay, wondering what had happened to her Clanmates

It took a full day for the floods to disappear. When they did, Iceflight was horrified at the sight.

Bodies, soaked wet and dead. Except for one.

Enough for Iceflight's mind to say, You're not the only one.

Duskbird blinked open her eyes, bleary with exhaustion. She had no idea what had just happened, but she remembered swirling waters and shrieks. Glancing around her, she was shocked to see that bodies were strewn all over the ground. None were moving, except one.

Astonished, Duskbird struggled to sit up. The other cat, Thistlestep, was also getting up. "Hey Duskbird," she called out, "You alright?"

"No," she growled. "Of course I'm not alright. We almost got drowned for StarClan's sake! How can anyone be alright?"

Thistlestep now had a sour look on her face when she realized that the only survivor in ShadowClan was the snappy runt, Duskbird. The brown she-cat licked her fur and promptly glared at Thistlestep.

Duskbird rolled her eyes. She may have been the hardest cat to deal with, but Thistlestep was hard to keep under control. "Look." She mewed unkindly. "We're the only survivors, so we might as well stick with each other and visit the other Clans."

"Who killed Duskbird and placed you in their place?" Thistlestep mewed incredulously. "Nothing would ever make you actually stick with someone like me."

The brown she-cat sighed. "Get moving, Thistlestep. We have a lot to do."

"I'm coming." Thistlestep groaned, reluctantly limping after Duskbird. The wiry she-cat stood at the top of ShadowClan's camp, surveying the damage. She turned to the limping she-cat.

"Do you have any idea what exactly happened to our camp?"

Thistlestep furrowed her brow. "Not too sure to be exact. I just remember rushing water and everyone was submerged in a tidal wave. Then I blacked out and woke up with you staring at me."

"Gee," Duskbird mewed sarcastically. "My face is that bad to look at?"

"I didn't mean it as an insult." Thistlestep snapped back. "That's how I woke up, but it was not a pleasant sight for the record."

Snorting, Duskbird continued on, trying to see how the territory was. "I can't believe StarClan left me with you."

They stumbled onwards, snapping insults at one another. Thistlestep was obviously getting annoyed, and Duskbird was rolling her eyes, acting as she would if the whole Clan was alive. "Look, just shut up and keep moving." Thistlestep snapped.

Duskbird's eyes widened, and she glared at Thistlestep. "If it wasn't the fact that I need you to help me search, you'd be dead right now."

"And you're lucky that I plan on never killing anyone in battle or else you would be dead right now." Thistlestep shot back.

Sucking in her breath, Duskbird whipped around and kept going. She breathed in slowly, and tried to calm herself. This isn't the time to tell Thistlestep how much of a loner she is. This is the time to search for survivors.

When the two she-cats finally reached the highest point in camp, they turned and stared at the ShadowClan's territory.

Thistlestep stared blankly at the barren land. The Clan she had grown up in, was completely gone. Her tail drooped as she watching the last of the water trickle down what was left of the grass.

Duskbird didn't seem fazed by this revelation. "We should see if there are any other survivors. I don't want to be stuck alone with you forever."

Thistlestep narrowed her eyes at the comment, but said nothing. She knew she wasn't very good, but she was better than some cats were.

"We should look for others then." Thistlestep mewed. "Perhaps ThunderClan has some cats left?"

Duskbird snorted, and muttered something about RiverClan being able to swim, but began to walk towards ThunderClan territory. Or rather, what was left of it.

Thistlestep did her best to stay upright while limping through the mud, but felt herself slipping several times. She could feel Duskbird judging her, and she sighed to herself.

They crossed what they guessed was the border, and treaded further into ThunderClan land.

They reached a cliff, and could see a way down. Bodies lay at the bottom, covering the ground. This was clearly the camp.

"Be careful." Thistlestep said to the brown and gray she-cat. Duskbird snarled. "I don't need your help."

Thistlestep looked down at her paws, and carefully walked down the slippery rock into the camp. The sandy ground stuck to her feet, but she ignored the grainy feeling.

None of the bodies seemed to stir, until Duskbird called over over to a high ledge. "This one's breathing!"

Thistlestep limped over to the ledge, as fast as her legs could take her. She nearly tripped over a kit on the way there. The little kit was mangled, and clearly dead. Thinking of Robinkit and Slatekit from her own Clan, she felt sad, and wished that she could have died instead of them.

"Are coming or not?" Duskbird's sharp mew jolted Thistlestep out of her thoughts, and she ran over to the she-cat.

As she heaved herself onto the ledge, Duskbird shook the silver she-cat. "Wake up." She murmured gently.

The silver she-cat jolted awake. "What? Where am I? Who are you?"

Instantly, the she-cat backed up. "Please don't kill me!" She mewed, fear in her eyes.

Duskbird rolled her eyes. "If we were going to kill you, why in the name of StarClan would we wake you up first? Honestly!"

Thistlestep mewed, "We're the last cats from ShadowClan. Everyone else died in the flood. It seems that you're the only survivor of ThunderClan."

The she-cat shivered, and began to lick the water out of her sodden pelt. "I can't be the only one." She mewed between licks.

Duskbird sighed. "Well, if you can see anyone else breathing, tell me right now!"

Before is got ugly, Thistlestep mewed, "I don't think I got your name. Mind telling us?"

Duskbird whispered to Thistlestep, "I'm going to check if there's anyone else breathing. Stay here, and keep her calm."

Thistlestep nodded, and the two she-cats sat in silence. Both of them were unable to fathom that all they cared about was gone forever. They had nothing left.

Eventully, they got startled out of their thoughts, when Duskbird yowled, "There's another one!"

As they approached Duskbird, they spotted a white she-cat. "Iceflight!" Silversong cried, and ran over to her friend.

The silver she-cat nodded. "Same with these two ShadowClan cats. They came looking for survivors."

Iceflight sits up and nods. "So, are we the last ones left? Four she-cats?"

Thistlestep shrugged. "There might be some WindClan or RiverClan cats left. We should probably head out to find them, if there are any."

Duskbird nodded, and the four unlikely friends set off for their journey.

Silversong was up in a tree when it happened.

She was just minding her own business, shredding leaves with her claws, and hoping that the deputy's patrol wouldn't find her up there. She enjoyed the patter of the rain on her fur, unlike the other cats.

That was when she saw the first stream of water. Curiousity sparked in her, and she wanted to climb down to investigate. But something held her back.

The rain began to pour down harder, until it was an unstoppable torrent. She fluffed out her fur in an attempt to keep warm, even though it was too late now. She wanted to climb down the trunk, but it was too slippery. She would most likely fall and break a leg or something.

The water was really gushing now. She saw the dirt stirred up, becoming a murky mess, and bushes and trees uprooting themselves. She cried out for help, but no one answered but the thunder and the sound of flood waves crashing below her.

Suddenly, she saw another object drifting beneath her. She knew what it was at first sight. Unmistakably, it was the body of another cat. Judging by the long, waterlogged tortoiseshell fur, it was Dappleleaf. Her body was being tossed mercilessly by the current.

Choking cries came up from her throat. Of all the people that understood her... Dappleleaf did the most. More than her own parents and siblings, who basically ignored her. Only Dappleleaf made an effort to talk to her, and now she was gone.

More bodies were pushed beneath the tree by the churning water. Guilt welled up in her every time she saw one. She was there, and she could do nothing.

It was all her fault.

Unthinking, she released the grip of her claws, and slid off of the tree branch.

She hit the water, and everything went black.

She had woken up to four other cats prodding her. Gave her a scare, since she usually didn't like cats touching her or being in her personal space. Especially when she was half-drowned.

And she was now still alive, and traveling with the other cats. There was Iceflight, a pretty she-cat from her own Clan, Dusk-something, and another cat that she had not paid attention to the name at all.

Wary of the ShadowClan cats, she kept her distance.