This Fanfiction was created by Robo and Dawn. 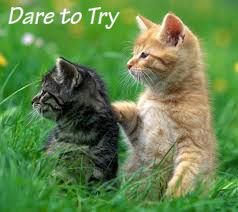 What's going on? The words flickered in my head as screams and yowl's broke out in the camp. I stretched open my eyes and stared at group of cats that were fighting. Then, I saw my father lying dead on the ground.

No... I thought and tryed to stand up on my wobbly legs. Oof! I toppled over hearing a snicker behind me. It was Petalkit. I stoped and stared her in the eyes, with a uncontrollable feeling flickering inside of me. I pushed the thought aside and tumbled over to the nursery entrance.

My ears rang at the sound of screeches. Next thing I knew, my mother Softeyes was picking me up. " Come on!" a tom yelled and led us out the backway. My mother carried me and Petalkit. Her fur brushed against mine making my stomach turn with emotions.

Petalkit caught my eye and batted at my nose. I stared in her deep green eyes getting lost. Petalkit giggled at me as we were set down, out of camp. My mother was crying at the loss of my father.

The tom tried to sooth her with calm words, she wasen't paying much attention. She was just staring down at me with those soft eyes.

Petalkit stared at me and mewed "wanna play tag." I thought about her question and nodded, standing up. She chased after me and niped my tail. I bit her back and raced away.

Night came quickly, and all I dreamed about was Petalkit. What is this feeling I have for her? I thought while sleeping. Feeling the same flicker when I thought of her.

When I woke up Lightningkit was starring at me with wide, gentle eyes and I could feel my insides squirming gently, in a way that I failed to explain at the sight of him.

"Hey," I smiled at him, pushing myself up to my paws and finding my gaze locked with his.

What's wrong with me?

I shook my head forcefully, forcing myself not to pay attention to his face.

"Want to play a game?" I asked him gently.

There was a long-lasting tension between us before he nodded.

I smiled at him, turning around and following him as we raced out of our den, and from there out of camp as well, pushing back the squirming feeling in my stomach.

I felt nothing for Lightningkit.

We were just friends.

And that was all.

I tagged Petalkit and raced off laughing, feeling my stomach turning with that unnusual feeling.

I caught her gaze and stared into her big green eyes.

I tripped over a rock and giggled with embarresment. Petalkit blinked at me then laughed.

My ears burned with embarresment. "Hey, Petalkit..." I slowly mewed feeling the flicker of feelings grow. She tilted her head at me and I quickly mewed "Race ya back to camp!!" and raced off.

Petalkit, I think I like you. Thats what I wanted to say to her.

Petalkit watched me take a peice of prey  and drag it back to the nursery for me and her to share. "Hey..." I purred and threw the mouse towards her. "Wanna share?" She nodded and tackled the mouse. I laughed and ripped off a shred of meat.

The blood rushed through my body making my eyes light up.

Petalkit laughed and tryed some for herself. Her eyes light up too. She squealed with happiness and dove in for more. I laughed and ate the rest of my share.

I crawled in beside my mother and thought of Petalkit until I fell asleep.

My dreams swarmed with images of Petalkit and Frostkit, a tom I thought Petalkit liked.

He was way better for her.

I shouldn't even of thought of her liking me.

It would never work out I guess.

"I'm becoming an apprentice soon!" Lightningkit skipped around the center of camp, his eyes dancing with unmissable excitement.

"Cool!" I pretended to be excited but I couldn't ignore the churning feeling in my stomach.

Lightningkit would be leaving my den.

He would be leaving.

The thought struck me with a sharp blow I found hard to control, and was surprised by the force of it, as I could barely hold myself on my paws.

What's wrong with me?

I gazed at him softly, and he gave me a confused glance, "What's wrong?" He gently asked.

I was surprised by the impact his voice had on me.

"Nothing," I found myself stammering, not sure how to react through this new feeling that was surging through me, which I had identified by now.

And it surprised me.

I could see her face turn red as she turned and hid it, my eyes focused on her beautiful ruffled fur.

I blinked as she looked back at me and padded away. My feelings for her grew stronger ans stronger, I knew I felt love.

The sun's rays radiated on her fur, leaving a shine to it. My pelt already started to smooth out. I knew when I became an apprentice then me and Petalkit would be seperated. But why whould she like me anyway?

The excitment of becoming an apprentice faded from my eyes and I stared down at the ground. "Hey, whats wrong?" Petalkit asked me, sitting next to me. I breathed in and purred "Oh, nothing." I licked my shoulder to hide my embarresment.

My heart pounded as my tail slowly laid on her shoulder in reasurrence.

"Today's the day!" Lightningpaw was jumping around camp in excitement, his eyes glittering, as I felt my heart sinking all over again.

A part of me wanted him to be happy.

But the other side of me needed him by my side.

Feeling torn, I blocked out his raucous, burrying my head into my paws trying to fall back asleep and ignore the excited tom and my aching heart.

I'll be an apprentice soon...

But soon could be too late.

I felt my head being whacked by one of his paws and snapped it up to glare at him, "Would you watch your paws?" I snapped loudly.

"Aren't you excited for me?" He queried.

"Oh," Hurt was available in his gaze but I ignored it.

I was hurt more than he could have ever been.

I watched Petalkit get up and walk away, a hurt feeling stirred inside of me as I stood up and ran off, not caring where I was going.

I let the tears spill when I got out of sight, I couldn't handle it when Petalkit was mad at me. She even acted like she hated me. But hate is a strong word....

I liked Petalkit so much until my feelings were torn in half. How dare her! How dare her not to care! I would care if she was an apprentice! But yet again I did see a hurt look in her eyes.

I soon felt horrible for boasting, let alone telling her. She didn't deserve my selffish bragging.

I padded over to the clan entrance and sighed, seeing Petalkit sitting all alone near the nursery. I slowly walked in and heard Owlstar's yowl for a ceremony.

I didn't bother fixing my ruffled fur, I just walked in and sat down.

Oqlstar cleared his throat and yelled "All cats old enough to catch there own prey please join under the Highleadge for an apprentice ceremony!"

Lightningkit knew that was his cue, he walked up next to Owlstar and mewed into his ear "I'm not going to become an apprentice unless Petalkit becomes one too..."

Lightningkit looked over and saw  Petalkit cringe at his words. He sighed and sat down, unable to look at Petalkit. He could feel her sad gaze burn into his pelt as Owlstar announced his Mentor, Frostbite.

Lightningpaw froze and stared down at Frostbite. The tom had a frosty white pelt with jagged scars everywhere.

Lightningpaw blinked in fear and walked down to go greet him.

He licked his shoulder, catching a glare from Frostbite.

he knew right from there that his life would be horrible.

I found myself unable to resist the prospect to cheer for Lightningpaw as he became an apprentice, as much as it broke my heart to see it.

However, whenever I glanced at him this strange quiver went up my back.

I soon realized, that it wasn't Lightningstrike.

The sight of the warrior sent shivers down my spine as I realized that there wasn't something right about him; a sinister feeling I couldn't decipher.

It worried me at the thought that he would be spending lots of time with Lightningpaw.

I quickly pushed myself up to my paws as soon as the ceremony was done and bounded over to the newly made apprentice, forcing myself to be happy.

Just be happy for him.

"Hey," I purred, "Congratulations on become an apprentice!"

"Thanks," He replied, quickly brushing noses with me.

When he pulled away I found myself blushing, as my gaze traveled down to my paws in embarrassment, "Good luck," I whispered.

Lightningpaw smiled at her and padded over to the fresh-kill pile and grabbed a skinny mouse.

"Nahahah!" The deputy Glowflight growled and pulled the mouse away. "You have to sit vigil."

Lightingpaw nodded and crawled over to the clearing, sitting up.

He sat there alone, cleaning his fur. Boredly.

"Lovely little furball, sweet little boy, I love you more than you know and I always will." Lightningpaw repeated this saying his mother sang to him every night.

"Your vigile is over, you may sleep now." Glowflight growled and walked off.

Lightningpaw crawled over to the apprentice den and laid down and fell quickly asleep.

His dreams raced with Rosekit, and the thought of her becoming an apprentice.

But does she love me?

Those worried thoughts crumbled in his head as he thought of her pretty face, her touching smile and soft eyes.

Retrieved from "https://warriorsfanfic.fandom.com/wiki/Dare_to_try?oldid=192441"
Community content is available under CC-BY-SA unless otherwise noted.