This is a fanfiction by Astral and Pine! We hope you enjoy Code of the Stars! 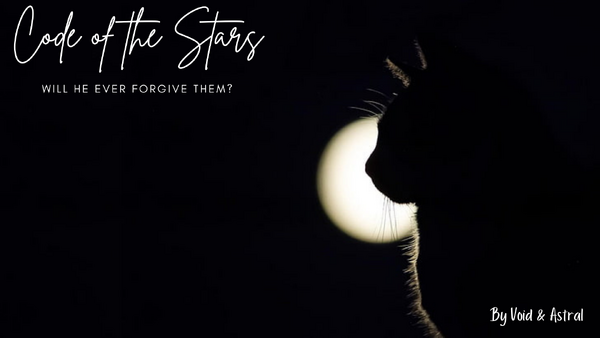 A storm was brewing in the darkness. Hawkwing's heavy paws crushed the fallen leaves as he walked towards the river, his dull green eyes emotionless. He wanted to go for a moonlight walk, but he didn't expect that a violent storm was coming. His long brown tabby pelt felt light in the cold breeze.

He padded closer to the river, hoping that he could attempt to catch a few pieces of fresh fish to fill a few stomachs in the morning. He bent over and squinted, trying to see if he could spot any fish that were oblivious to their fate. He then spotted a trout and made sure that his figure wasn't reflecting in the water before quickly scooping the fish out of the water. The fish struggled, but Hawkwing ended it with a killing bite. Although, he was a WindClan cat, his RiverClan mother taught him how to catch fish when he was younger, and he'd never forgotten.

That was a good catch, if I say so myself!

Suddenly, thunder erupted throughout the darkened sky, making Hawkwing jump. As he landed, he stumbled and fell into the cold river, causing a loud splash. Rain started pouring down and Hawkwing's eyes widened as he struggled in the river's strong current.

No matter how hard Hawkwing tried, he couldn't keep his head above water and with every gasp of air he took, more water filled his lungs. His paws were numb from the cold water and his body ached from all the struggling.

Then, it all went dark.

His eyes opened and he knew he wasn't a part of Windclan anymore. He was with StarClan now.

"Hawkwing, we've been expecting you," a cat murmured.

He looked around and saw a dark black cat with a white patch on his chest. A smirk spreading across the cat's face. Hawkwing frowned, not knowing who this cat was. He had a large scar across his face and although, he was small, he has a very muscular build.

"W-who are you?" Hawkwing asked curiously, his voice breaking slightly.

The cat tilted his head before answering, "Why, I'm Badgerclaw, and I've come to welcome you to the Dark Forest,"

What have I done to end up here?

"Yes, the Dark Forest!" Badgerclaw grinned, his eyes glistening as he said, "Oh, Hawkwing, you have so much potential, but don't fret, I'm going to teach you how to unlock that potential. You could be one of the strongest and most powerful cats, if you let me help you..."

Hawkwing was didn’t know where he was running to, but he knew where he didn’t want to go. He didn’t know what he did to end up here, but he knew he had to escape. The only sounds his paws thudding on the forest floor and his heavy breathing, he skidded to a halt, sending pine needles and oak leaves up in to the cold night air.

Hawkwing rest on the bank of a river. One that looked breathtakingly similar to the one that sent him to this place. He didn’t want to cross it, but he knew he had to. Hawkwing frowned and shook his head. He backed up, and leaped across the river. Turning back and looking behind him, Hawkwing saw the river that had lead to his demise. He let out the breath he’d been holding, and lay, panting.

“Well, hello there, little kit,” a smooth voice called from the mist. “Looking for your mother?”

Hawkwing jumped to his paws, and let out a hiss.

“Whoever you are, come out and show yourself.” He heard a cackle from around him, and saw a shrouded figure approaching him.

“You haunted me in life, but you cannot haunt me here,” he spat. “There’s a reason I’m here.”

“Mapleshade, stop toying with the newcomer.” A deep voice called from behind him. He frantically turned to look at the other cat, and the river was gone. Mapleshade snarled at Hawkwing, and backed away, head down.

“W-who are you, and why am I here?” Hawkwing’s confidence was gone. The cat frowned, and looked genuinely disappointed.

“It’s Badgerfang,” he exclaimed. “Don’t you remember me?” His frown melted into a wide grin. “Why, of course you do. How could you forget me?”

Badgerfang padded away from Hawkwing, and he rushed to follow. Badgerfang brought him to a grassy clearing, and turned to sit with his tail wrapped around his paws. The mist crowded them, and Hawkwing was beginning to feel claustrophobic. Badgerfang opened his mouth to speak, but then vanished in to the mist as quickly as he had appeared. The mist and darkness began to lift, and Hawkwing’s eyes brightened. He heard a voice, and then a cat walked to his side. He recognized the cat as his former clanmate, Swallowtail.

“He-hey, Swallowtail.” He cleared his throat. She pulled back and looked in to his green eyes with concern.

“I haven’t seen you around since you passed. Have you been avoiding me?” She sounded hurt.

“Y-you’re in the Place of No Stars? The Dark Forest?” She leaped away from Hawkwing and scoffed,

“I didn’t know you were like that.” She strutted away, chin and tail high.

Hawkwing found a nice place to rest, while the sun was still out. He pondered what he was going to do about Swallowtail and the rest of his friends, and how he was going to convince everyone of his innocence. He thought himself to sleep, and when he awoke he was back in the dark, misty forest surrounded by cats who had murdered, betrayed and manipulated others, whilst he had done nothing.

The news of the missing Hawkwing spread like greencough in leaf bare. Worried murmurs and rumors spread throughout WindClan when the search patrol came back. Oakstripe's dark brown fur blew in the wind as she bounded across WindClan territory.

"We looked all over WindClan territory, we can't find him," Darkstripe reported to Eaglestar.

Oakstripe's heart dropped as she overheard Darkstripe's words, and she thought, Oh brother, where are you?

Eaglestar replied with, "Tonight, at the gathering, we'll ask the other clans to search for him,"

Darkstipe nodded before turning and walking off to the warriors den. Oakstripe watched him walk off before turning to Eaglestar. The tortoiseshell she-cat smiled softly at her and reassured Oakstripe, "We'll find him, I promise,"

Oakstripe relaxed slightly, "I hope so,"

Eaglestar brushed against Oakstripe's lean body and she purred softly.

This is why I love you. You always know how to make me feel better, Eaglestar.

"I better go decide who's coming to the gathering tonight. I'll see you later," Eaglestar smiled before turning off and padding off to her den slowly.

The chatter of the gathering died down when RiverClan's leader, Ivystar, stepped forward.

"Last night, we found a dead fish on our territory. It was out of the water and had bite marks in it, so a cat obviously killed it. No one of my clan was out last night, so someone tresspassed," Ivystar hissed, her tail swishing with annoyance.

Oakstripe's eyes widened, knowing her and her brother were one of the only cats that weren't in RiverClan that knew how to catch fish.

D-did he kill it? Maybe we can find him close to the river!

Eaglestar spoke up, "I have to report that Hawkwing is missing. He disappeared last night and we haven't seen him since. We sent a search patrol out this morning and we haven't yet found him. I know, it's a lot to ask, but can every cat keep and eye out for him..."

Distressed murmurs echoed throughout the clan and Hopestar piped up, "Of course, Eaglestar. I'll send out a search patrol in the morning!"

Oakstripe smiled at Hopestar's concern and generosity, and a sliver of hope sparked inside of her.

Retrieved from "https://warriorsfanfic.fandom.com/wiki/Code_of_the_Stars?oldid=386694"
Community content is available under CC-BY-SA unless otherwise noted.