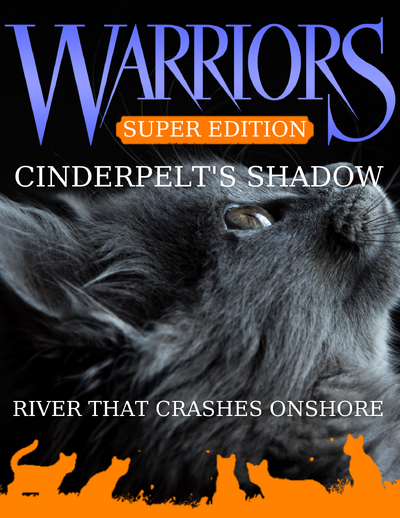 LEADER- BLUESTAR— blue-gray she-cat, tinged with silver around her muzzle.

WARRIORS (toms and she-cats without kits)

LEADER- TALLSTAR— a black-and-white tom with a very long tail.

DEPUTY- DEADFOOT— a black tom with a twisted paw.

LEADER- CROOKEDSTAR— a huge light-colored tabby with a twisted jaw.

SMUDGE— plump, friendly black-and-white kitten who lives in a house at the edge of the forest.

BARLEY— black-and-white tom who lives on a farm close to the forest.

PRINCESS— a light brown tabby with a distinctive white chest and paws—a kittypet.

Cinderkit woke from her nap.

"Cinderkit!" a voice called. "Why are you such a sleepy furball? We want to play a game, but Frostfur says we can't because you're asleep!"

"Come on! Thornkit and Brightkit are waiting for us!" he exclaimed, clearly making an effort to stay undisturbed.

Cinderkit trotted out of the nursery, and saw her sister, Brightkit, jumping up and down, clearly excited for Frostfur to tell them what game they would be playing.

"What are you kits doing?" asked one of the other nursery queens, Goldenflower. She looked tired, and was clearly still grieving for her dead brother, Lionheart, who was the kits' father.

"Goldenflower," she mewed hesitantly. "Can you tell me how Lionheart died? Cats say he was a noble warrior, and I want to know how my father descended to StarClan."

Goldenflower sighed, clearly reluctant to tell the kit how her brother had died.

"It was a regular day. Your father was deputy." Goldenflower began clearly. "You might know this already, but then, the leader of ShadowClan was Brokenstar, who was an evil cat. He... stole you for ShadowClan,"

Cinderkit gasped. She didn't know that!

"We were outraged, so we got you back, which lead to a battle against Brokenstar and his tyrants," Goldenflower's voice started to quiver. "L-Lionheart died f-fighting for you and h-his clan,"

Cinderkit looked down, sorrow gripping her.

"But he is hunting with StarClan now," Goldenflower said, more confident this time. "They will honor him,"

'They had better!' Cinderkit thought.

Cinderkit went to sleep, thinking about her father more than she had ever done before.

'What if he's dead because of me?' she asked herself. Shock gripped her body. Cinderkit closed her eyes tight. 'No,' she thought. 'Definitely not,'

She closed her eyes, and went to sleep.

When Cinderkit opened her eyes again, she was in a forest with a lot of greenery. She gasped.

"Where am I?" Cinderkit asked to no one in particular.

"Who are you?" she asked the golden shape, whom she made out to be a cat. When Cinderkit looked more closely, she saw that the mysterious cat's eyes were filled with love and admiration.

Cinderkit jumped around with shock and happiness and grief.

"You are really my father?" Cinderkit asked to Lionheart.

"I am. I am here to tell you that you will walk a different path,"

"You are. And that is nothing to be afraid of. Being different is good,"

"T-Thank you, Lionheart," Cinderkit said, too shocked to think straight. "StarClan has a prophecy that you must fulfill," Lionheart rasped.

"This prophecy will stick onto you for as long as you live," Lionheart said. "But do not be afraid, my beautiful daughter. I have come to give you strength and bravery,"

"Well then, what is this prophecy?" Cinderkit asked.

Lionheart's voice turned into a whisper when he said, "Sharp Yellow will guide you throughout your journey," he began. "And one will become two. It is up to the second to free you,".

Cinderkit woke up panting. Everything at the camp seemed normal. Frostfur was grooming Thornkit, and Brightkit and Brackenkit were chattering excitedly about possible warrior names for themselves. Suddenly, Cinderkit remembered that today was their apprentice ceremony.

Goldenflower appeared from out of the warriors den, where she was talking to Tigerclaw.

“Sure, I guess,” Goldenflower said awkwardly. She lead Cinderkit into the medicine den. “Yellowfang is collecting herbs outside. I’m sure she’ll be fine if you talk to me here. What did you want to tell me?”

“I had a dream,” Cinderkit mewed. “Lionheart talked to me,”

Goldenflower gasped. “What did he say?”

“A what?” Goldenflower said loudly.

“He said, ‘Sharp Yellow will guide you throughout your journey. One will become two, and it will be up to the second to free you,’” Cinderkit said, shivering at the words of the ominous prophecy. “What does it mean?”

Retrieved from "https://warriorsfanfic.fandom.com/wiki/Cinderpelt%27s_Shadow?oldid=388431"
Community content is available under CC-BY-SA unless otherwise noted.