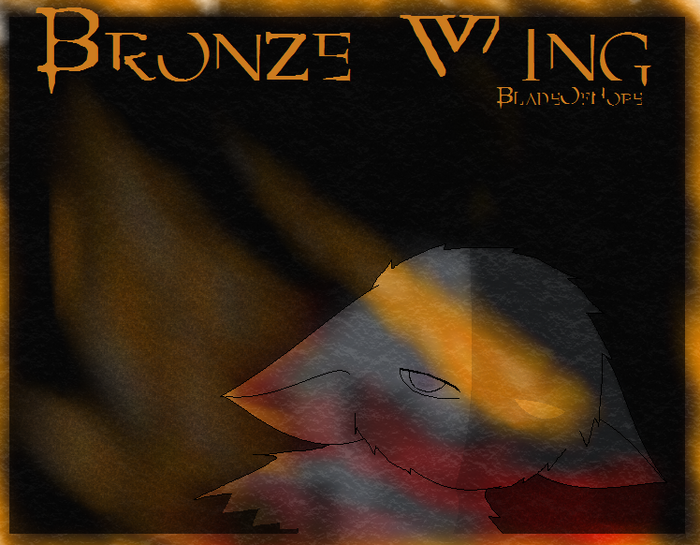 It wasn't my fault that the war started.

No matter what they say, it wasn't my fault. I swear it.

I know that my eyes have caused some confusion. I know. But there's nothing I can do about it. Let them blame me, if they want to. It won't make a difference. Cast suspicion on me all you want. I'll still be Sardonyx.

Yes, little one, I am Sardonyx, the cat who was accused of using magic. I am the cat who was driven out because I tried to help the Clans survive. You're right; it isn't fair, but what am I supposed to do about it? I've accepted that it is my fate to always help but to always be cast out. This is my lot and life, and I shall bear it gladly.

It is dangerous out here, you know. Why have you come so far from your peaceful Clan? Why would you want to see me, of all cats?

I see... I will tell you my story, if that is what you wish. Please understand, though, that I cannot protect you from all of the horrible things that have happened to me. If I am honest in my storytelling, I must tell the whole truth, no matter how gory or brutal it may be.

I am Sardonyx. This is my life.

Hollowmoon smiled down at her kit. "Soon, Stonekit. Soon. I promise. I just have to finish rebuilding this wall." She frowned at the ruined nursery barrier, which had been broken down when the war had come to their camp a moon ago.

"Those FlickeringClan warriors had audacity, attacking the nursery, of all places." An older queen, Pheasantfoot, grumbled from her nest, which was settled right next to the one bramble wall that hadn't been completely annihilated. "Where's their honor? Their dignity as warriors?"

"I know, I know," Hollowmoon soothed as she pushed some of the remaining brambles into a small pile. "But our warriors fought them off, and we're all still safe." While Pheasantfoot wasn't looking, Hollowmoon grinned at Stonekit as if to say, This silly queen is worrying about nothing! "ShiningClan will win this war; you'll see."

Pheasantfoot sniffed. "We'll see about that." She stood up, turned a few circles in her nest, and hunkered back down again, muzzle on her paws. Her tail was curled up over her nose; Stonekit tried to imitate the position, but her own tail was so fluffy that it made her sneeze, which knocked over the pile of brambles.

Hollowmoon snorted. "Stonekit, stop that! I'm trying to work!" But her eyes were sparkling, so Stonekit knew she wasn't mad at her. She purred and curled up in their nest, safely out of her mother's way but close enough that she could still watch. Her eyes just poked out of her fluffy mass of darkish dove-gray fur.

"What are you going to do about that kit?" The third queen in the Clan, Rosethorn, pushed her way into the ruined nursery carrying a bunch of flower stems. Even though she was expecting the kits of one of the Clan's greatest warriors, she had refused to stop working, despite many cautions from the medicine cats and almost every other cat who ever walked past her.

"What do you mean?" Hollowmoon stopped working. Stonekit closed her eyes and pretended to be asleep, hardly daring to breathe.

"I mean, what are you going to do with her?" Rosethorn repeated, spitting out a bramble that had gotten caught in her fur. "She can't stay here, surely; not with those eyes!"

Hollowmoon's voice grew deathly quiet as she stalked over to the ruddy brown queen. "She is going nowhere," she said threateningly. "Try to take her anywhere and I'll flay you; accuse her of being evil and I'll kill you in a second! Don't you dare say anything about my kit!"

Rosethorn blinked. "Okay, I'm sorry," she said. It didn't sound at all convincing. "It's just that... well, after all we've heard about cats with violet eyes..." Her voice trailed off.

"Don't tell me you actually believe the legend?" Hollowmoon just sounded sad now. "How many cats still hold on to the story of Silex and the Free? It's just a legend! The dark cat with the violet eyes and her great warrior assistant Zmaragdus are just kits' tales, nothing more!"

"Right, of course." Rosethorn sidestepped the anguished queen and lay down in her own nest. "I'm sorry, Hollowmoon; I didn't mean anything by it."

Hollowmoon seemed to accept the apology, since she continued working. But later that night when her mother curled up beside her and licked her head fervently, Stonekit realized that Rosethorn's words had cut deeper into her mother than she had realized.

Was she really a disappointment? She wasn't a member of the Free, the underground assembly of rebels and rogues. She wasn't even an apprentice yet!

Stonekit couldn't help her eye color, but surely Rosethorn was the only one who still believed in that legend. Hollowmoon was right; it was just a foolish tale.

But what would happen if there was some truth in it after all...?

The next morning, Stonekit awoke and stretched. She would only have a little bit more time as the Clan's only kit; she had overheard Flintstreak, the medicine cat, telling Rosethorn that her kits would arrive sometime soon.

Stonekit had only heard one other kitting, Pheasantfoot's last; the three kits had been stillborn and no one had mentioned them since. She hadn't been in the nursery at the time - Hollowmoon had conveniently pulled her aside to practice gathering moss for when she would become an apprentice - but she had heard the old queen's distant cries even deep into the forest.

I wonder what they'll be like, Stonekit wondered. She was five moons old, so she'd become an apprentice soon, but she looked forward to having some new kits to play with, if only for a short while.

Just then, Sparkstar's voice rang over the camp. "Let all cats old enough to fight come and heed my words at the Battle Stone!"

Stonekit streaked out of the nursery, diving behind the tall patch of reeds next to the camp's pool before the cats started gathering around. She wasn't really allowed to be at the Clan meetings, but if no one saw her, what was the harm? She had learned a lot since Stormpaw, the youngest apprentice, had shown her the listening place. "It's tradition for apprentices to pass this onto kits," Stormpaw had said, her whiskers twitching.

So it was there where Stonekit crouched as the warriors started flowing out of the dens and battalion camps. The Clan warriors, though strong and fit, looked small and weak next to the battalion fighters, who trained harder than anyone else to prepare for the war. While the regular warriors patrolled the territory, it was the battalion fighters who went out and fought in the war.

"As you know, FlickeringClan attacked our camp last moon," Sparkstar began, her voice somber. "Since then, we have rebuilt and regrouped, and now we will take our revenge!"

The battalion fighters cheered, but Stonekit noticed that the normal warriors looked restless and on edge. The stunning warrior queen, her light but vivid ginger pelt framed against the sun, stepped forwards. "We are ready, Sparkstar," she called up to the leader. "When do we attack?"

"At sundown tonight," the leader responded. The battalion fighters started murmuring amongst themselves with excitement. "You will follow the plan that has been laid out for you by Sagacitas." She dipped her head to the warrior queen. "That is all; return to your patrols and duties." Sparkstar jumped back behind the Battle Stone to where her den lay hidden, signaling the official end of the meeting.

Stonekit slunk out from behind the reeds. The deputy, Blizzardthunder, stood and started arranging the patrols. "Darkstrike, will you lead a patrol along the FlickeringClan border? Take whatever level-headed cats you like. If you meet a patrol, be brief but polite. Don't take any of the apprentices; they aren't good enough at keeping secrets yet." The black cat nodded and called to three cats to accompany her. "We also need someone to take a patrol to hunt; maybe downstream would be best...."

As the kit listened as the Clan arranged itself, she marveled yet again at how flawless everything seemed. Every cat had his place, and no one could feel left out for long; the warriors seemed content to hunt and patrol, while the battalion fighters, though quick to attack, had mastered a certain self-restraint. She had no idea what she would be chosen for; it all seemed so far above her.

Yet her sixth moon was approaching soon; it wouldn't be long until she'd have to make a choice. Warrior? Battalion fighter? She shook her head; it was too hard.

The decision could wait. Now, she had to get back to the nursery before anyone realized she'd gone.

Stonekit sat beneath the Battle Stone, kneading the ground with her paws in excitement. Her apprentice ceremony had finally come!

"Stonekit, you have reached your sixth moon, and you are now ready to begin your apprenticeship," Sparkstar was saying. "It is time for you to choose your calling before the Clan. What is your choice?"

Stonekit gazed around the circle of cats. For the most part, the warriors and the battalion fighters didn't mix, but occasionally two cats from the different groups would sit next to each other - like Rosethorn, a warrior, and Blackriver, a seasoned battalion leader. She purred as she remembered the four little kits - Streamkit, Wavekit, Flowerkit, and Nightkit - that had been born to the couple half a moon before.

All of them looked happy. Hollowmoon was there, her eyes gleaming with pride; Stonekit knew that her mother would support any decision she would make, although if she chose to be a warrior, Hollowmoon could help in her training. But on the other claw....

She swung her head around to the other half of the cats. Her father, Sanguis, had been a battalion fighter until he had been killed by a patrolling FlickeringClan warrior. The cat had caught Sanguis off guard; otherwise, he would never have died. He was too good a fighter to lose to a weaker cat except in an ambush such as that.

Surely, if she became a battalion fighter apprentice, she would be able to take revenge for him?

"I choose to be a battalion fighter," she said loudly, almost surprising even herself. Murmurs swept around the camp as cats frowned at her in confusion. Stonekit knew that cats thought she was too small and too weak to become a battalion fighter. Well, she would prove them wrong!

"Are you sure?" Sparkstar asked, her brow folded in concern. "You cannot change your mind, young kit, once you have made a choice."

Sparkstar's gaze softened. "Very well." With her tail, she beckoned a calico tom forwards. "This is Mythic. He will be your mentor, Stonepaw." She stepped down from the Battle Stone, declaring the meeting at its end.

Mythic half-smiled. "So, Stonepaw, you wish to be a battalion warrior?"

"Yes." She nodded with absolute certainty. "I want to honor Sanguis by following in his pawsteps."

Mythic purred approvingly. "A noble cause. Now, come with me for a moment. I will show you the battalion camp in which I sleep, and we can set up a nest for you next to mine. Sound good?"

Stonepaw nodded eagerly. It was official - she was going to be a battalion fighter!

Retrieved from "https://warriorsfanfic.fandom.com/wiki/Bronze_Wing?oldid=334964"
Community content is available under CC-BY-SA unless otherwise noted.