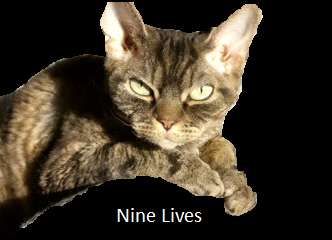 "Well, get on with it!" Jayfeather and Brambleclaw had reached the Moonpool. Brambleclaw had to get his nine lives to become ThunderClan's leader. Brambleclaw lapped up some mouthfuls on Moonpool water, curled up and went to sleep.

Brambleclaw's dream brought him to a place that he had not been to in a long time. Four tall oak trees were rooted to the ground beside a tall rock. "Fourtrees!" Brambleclaw exclaimed. Light glimmered everywhere, and a moment later cats filled the clearing. StarClan cats. Brambleclaw saw cats he knew that had died, cats he recognized, but didn't know the names of, and cats he did not know at all. A pale ginger she-cat stepped up to Brambleclaw. The ginger she-cat was his mother, Goldenflower. The last time Brambleclaw saw her, she was old, skinny and frail. But now she was restored to youth. Muscles, height and strength had gone back to her body. She touched her nose to Brambleclaw's. "With this life I give you a care." She mewed. "Your Clan will be in your steps, and this will be useful to make sure they rest safely in your paws." The life felt like a warm greenleaf breeze waving through Brambleclaw, but the smooth feeling stopped right away. The heat of fire waved up through the dark leader's body, and he heard teeth clasing, claws scratching and yowls of battle wave through darkness. Brambleclaw realized that care could be like TigerClan, LionClan and LeopardClan combined. Goldenflower stepped back into the heap of StarClan cats.

Brambleclaw felt tiny pawsteps prodding the ground. He looked down to see the tiny white kitten Snowkit. Brambleclaw remembered him and Tawnypelt- then Tawnykit, doing play-fights with Snowkit in the old forest, and the sharp sense of horror when he was taken away by a hawk. But he was safe with StarClan now. Brambleclaw crouched down so Snowkit could reach him, and the tiny white-furred kit touched his nose to the soon-to-be leader's nose. "With this life I give you assurance." He announced in his tiny, high-pitched voice. "Using it, you can make your Clan bright, especially in the times of worry and battle." The life that the tiny kit gave Brambleclaw surprised him. It sounded like just mere sentences, but it was much more than that. Darkness filled Brambleclaw's gaze and spirit, but a bright, small dot in the middle lay. It made all the darkness bright, and Brambleclaw felt as if something in him was refreshed. Snowkit stepped back, beside Goldenflower, into the crowd of sparkly cats.

A silver she-cat padded up to Brambleclaw. He remembered her. It was the she-cat who never returned from the Great Journey. Feathertail. Brambleclaw remembered everything with a pang. The falling rock, her blood spilling to the ground, Crowpaw's grief... But now there was a friendly gleam in Feathertail's blue eyes. She touched her soft nose to Brambleclaw's head. "With this life I give you courage," She purred. "You will need to use it for the sake of your Clan." The words sounded smooth and happy, but it felt the exact opposite. Brambleclaw heard jaws clamping, claws scratching, biting, bleeding, battles, yowls, while darkness raised up inside of him. But Brambleclaw had the courage to go through all this. He wanted to yowl to the stars, Feathertail! I'm so sorry! You shouldn't have died! But he couldn't. Feathertail was already back with the other cats.

After Feathertail, a black she-cat stepped forward. Brambleclaw, with a pang of grief, recognized her. Hollyleaf. "Greetings, Brambleclaw. I'm honored to give you one of your lives. You acted as a great father." She said. Hollyleaf touched her nose to Brambleclaw's head. "With this life I give you determination." She meowed. "Never give up on your hopes, and show your hard work to get them to happen." A jolt of pain hit Brambleclaw. It was first like a lightning strike of claws. Then he felt the cold of leaf-bare, a hot greenleaf drought, the warm air of newleaf and the dry breeze of leaf-fall all combined. As Hollyleaf walked away, her voice whispered in Brambleclaw's mind, determination lasts forever.

Hollyleaf was sitting back with the other cats, beside a muscular ginger-and-white tom. Brambleclaw identified the black-and-white tom who leaped to him. Swiftpaw! He was still small as he was at death, but the air of an older cat sparkled in his pale amber eyes. Brambleclaw looked into his eyes, and Brambleclaw closed his own. Swiftpaw was lying on the ground with blood on the Snakerocks, and Brightpaw had blood on half her face, her flank rising and falling slowly. What a death! Swiftpaw stood on his toes to touch his nose to Brambleclaw's head. "With this life I give you forethought." He said. "Use it in a better way than I or others have." As Swiftpaw stepped back, Brambleclaw felt a pain through his whole body like a dog or fox had bitten him. Then everything stopped in black. Brambleclaw opened his eyes, shivering, and Swiftpaw had already walked back.

A dark gray she-cat walked forward. Her blue eyes were shining. "Cinderpelt!" Brambleclaw exclaimed. Her leg wasn't broken, and she looked happy. Brambleclaw remembered the last part of Cinderpelt's life, being killed by a badger while helping Sorreltail have her kits. Cinderpelt touched Brambleclaw's head with her nose. "With this life I give you protection." She mewed. "The Clan lies in your paws, and you need to protect them the strongest way you can." To giving this life, Brambleclaw felt flames of fury, and the roars of lion and tigers sounding through the screeches of battle. As Cinderpelt walked back to the crowd, Brambleclaw realized how fierce protection could be.

An old gray Persian she-cat came to Brambleclaw. "My name is Yelllowfang," She told him. "I was Cinderpelt's mentor. I died in the fire back in the old forest. I gave my life to save you, and now you've become something great." Her orange eyes filled with happiness. Yellowfang's flat nose touched Brambleclaw's head. "With this life I give you sacrifice," She rasped. "It's the best choice to turn to for serving your Clan." As she gave the life, amber flames blazed in Brambleclaw's eyes. He felt himself in a searing hot forest, alone. He started relaxing, even in the hot pain of the blazing. That must have been how Yellowfang died. Yellowfang started walking back with the other cats, but before that, she turned her head, her eyes showing more emotion than her words could describe.

Brambleclaw remembered the blue-gray she-cat that walked forward next. The last time he saw her, he was called Bramblepaw. "Bluestar..." Brambleclaw muttered. The last time he saw the previous Clan leader, she was old, frail, scrawny and depressed. But she was restored to youth agian. She was happy now, and her icy blue eyes were wide and glowing. Bluestar touched her pale muzzle to Brambleclaw's nose. "With this life I give you hope." She told the new leader. "Like moonlight, it'll brighten up the times of your Clan when everything seems hopeless." This life did not cause Brambleclaw any pain. He felt like he was running on the lake, his paws hitting the black waves over and over while the wind was flowing past him. Brambleclaw blinked, and Bluestar was lying down beside the other StarClan cats, a blue-gray tom and a gray-and-white she-kit beside her. Possibly Mosskit and Stonefur?

Brambleclaw waited for the final life-giver. A muscular ginger tom prowled over to him. "Firestar." Brambleclaw put his chin up. Firestar led Brambleclaw up on top of the Great Rock. "Hello, my apprentice, my deputy, Brambleclaw." Firestar began. "Being Tigerstar's son, I at first thought you would turn out like him. I was worried. But what you have become now is amazing. Tell Sandstorm, Leafpool and Squirrelflight not to grieve, as I am fine in StarClan. I'm very happy for what you are now. Clan leader. I've realized that your ambition is a different shade from Tigerstar's." He touched his nose to Brambleclaw's head. "With this life I give you loyalty, power, responsibility and wisdom." The great ginger leader stepped back one pace. "These will help you make your duties stronger. What you are now is never what I would have expected back when you were a kit. StarClan made a great choice, and your loyalty is easy to identify. Go now, Bramblestar, and lead with power!" "Bramblestar! Bramblestar!" Firestar yowled. The other cats started yowling too. StarClan cats and Tribe of Endless Hunting cats. "Bramblestar! Bramblestar! Bramblestar!" All the cats started rising up to the sky. Once they had gone, Fourtrees felt quiet again. As wind came by, Bramblestar leaped off the Great Rock. Bramblestar woke up beside the Moonpool. "Jayfeather?" He called. "I'm here," Replied his medicine cat from the shadows. He went in step beside Bramblestar as the two started walking down the stream. "I saw the whole ceremony, Bramblestar." Jayfeather mewed. "Congrratulations." As watching the stream flow by, Bramblestar thought of what he would take on now, with his leadership. I have power now. I have leadership. I am Bramblestar, the leader of ThunderClan!

Retrieved from "https://warriorsfanfic.fandom.com/wiki/Bramblestar%27s_Nine_Lives?oldid=345430"
Community content is available under CC-BY-SA unless otherwise noted.