A songfic by Rainy for Robo's contest. The song is one I'm sure we all know & love; "Apologize" by One Republic. The story is about a young she-cat called Quailfur, who's trying to resist the apologies and charms of the cat who broke her heart. She knows it's too late for their relationship, but is she strong enough to carry her choice out? 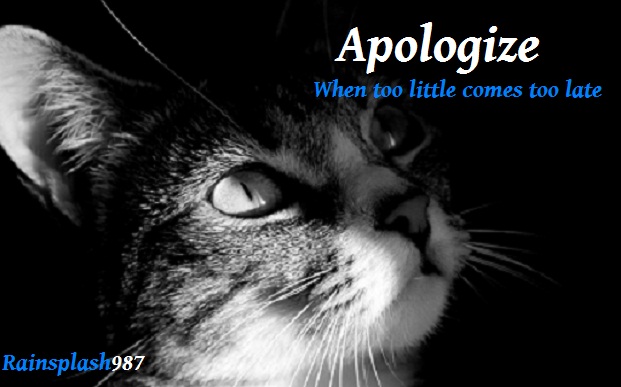 I'm holding on your rope

Got me ten feet off the ground

Paralyzed, Quailfur stood and stared at the cat standing in front of her. The numbing blankness that had covered her mind was slowly parting, revealing a heartrending pain beneath. Was this really happening to her? Surely this had to all be some kind of horrid, twisted joke that the entire universe was in on. Reality would be too much to bear.

Somehow, she found the voice to speak.

"Iceclaw," she said slowly, her eyes never leaving the tom's face. "What... Who was that?"

The white tom met her gaze with a hostile defensiveness. "Who was who?"

Nearly choking on disbelief, she stuttered, "T-that she-cat! The beautiful cream one. You had your tail wrapped around her, and you said... those things you always say to me."

A pair of cold blue eyes - the same eyes she had seen so full of warmth and love directed towards her before - flicked over her as if she was just an annoying brat of an apprentice. Iceclaw took a step towards her, suave and smooth as ever. "Now, Quailfur-"

"Can you deny it?" she interrupted. "Can you explain it?"

Desperately, she waited for his answer. Even though she knew it wouldn't come, she was begging for an explanation. An excuse. A reason to believe this wasn't the end. She needed something to hold onto. Anything...

And I'm hearing what you say

But I just can't make a sound

Unable to look at him without breaking down, she turned so he couldn't see her face. Gently, his fur brushed hers. It was the whisper of nights past, nights spent together under the stars, so wrapped in their own love that nothing else seemed to matter. Were all those nights really being shattered to nothingness now?

Iceclaw's voice was a whisper. "Quailfur, it didn't mean anything. I love you. I've never loved anyone but you. You're everything to me. You know that."

She longed to voice her thoughts, but her throat was too dry to even utter a croak. Instead, she just shook her head.

You tell me that you need me

Then you go and cut me down, but wait

While they stood there, her facing away from Iceclaw, her mind pitched her back through time. Back to when Iceclaw had been a gawky, awkward apprentice. How they'd become friends, and, over the course of time, lovers. How she laughed every time he did something silly and goofy. How slowly, she had noticed how he was filling out, growing, becoming more and more mature. And then, all at once, she was in love with him. It was so sudden, yet so natural.

The way they had needed each other was like nothing she'd ever known. The way his face would light up when he saw her, the way her heart would skip a beat at the sound of his voice.

Now the sound of his voice started her out of her thoughts, and conjured nothing but dread within her.

"Quailfur, you're blowing this out of proportion. It was nothing, really. Her name is Skybreeze, and she's nothing compared to you."

Instinctively, Quailfur flinched away from Iceclaw. Didn't he understand? How hard it had been for her to trust him, and how much her trust meant? He had broken her trust, broken it and flung it back in her face. He had shattered her heart. Without another pause to think, she began walking away. His voice halted her in her tracks.

You tell me that you're sorry

Didn't think I'd turn around and say

Despite all the voices in her head, clamoring for her to ignore him and walk on, she found herself turning towards Iceclaw. She still said nothing, but she raised her head and waited quietly, daring him to make it better. A false attempt at giving him hope; she had already made up her mind that nothing could make it better.

Still, the innocent despair in Iceclaw's eyes was enough to melt the edges off her icy heart. "I'm so, so sorry Quailfur. I just wasn't thinking."

"Then how did you come to meet her? How did you-" Her voice nearly failed her, but she pressed on. "-fall in love?"

His mouth opened and closed soundlessly, like a gaping fish. Then, "I can't... I'm sorry," he repeated numbly.

Pleading was plain in his face as he took another step towards her. But she backed away, preparing herself for what was sure to be the most difficult speech of her life. The most difficult, and the most important. Defiantly, Quailfur looked up at Iceclaw. There was a calm assurance about his expression, as if he knew what was coming: a tear-filled sob of forgiveness and a heartfelt embrace.

"Say it's okay, Quailfur," he pleaded. "Say you forgive me."

She steeled herself for the inevitable. She should've known this wouldn't work out as soon as Iceclaw began to fall in with the popular crowd. She should've seen this coming, seen it in his growing indifference and insensitivity. But in her love, she had been blind to his faults.

"It's not okay, Iceclaw," she said, in a tone so cold she couldn't believe it belonged to her.

Obviously misinterpreting her meaning, he hung his head sorrowfully, like a little kit being punished. "I know it's not okay. But I promise it'll never happen again. Skybreeze is nothing to me, nothing that could ever compare to you. You're beautiful. You're all I ever wanted."

Shaking his head, Iceclaw said, "I didn't mean it. I can't explain it Quailfur. What can I say? We do strange things. Things we regret. I don't regret anything more then I regret hurting you."

"Don't you understand Iceclaw? Aren't you listening? It's too late for that."

I'd take another chance, take a fall

Take a shot for you

Her words hung between them, undeniable, unchangeable. Iceclaw opened his mouth and closed it, but no sound came out. It was his turn to stare at her in disbelief and hurt. "You're not serious, are you?"

Quailfur held her body rigid, wondering if he could hear her heart breaking and shattering itself. "I am perfectly serious. We're done."

A deathly silence fell over them for several seconds. In the distance, Quailfur could hear a ThunderClan patrol, probably out by the ShadowClan border; things had been icy between their two Clans ever since the last battle. But all that, all those thoughts, were faint and unreal, as if they were happening in another dimension. All she could feel was the pain of losing Iceclaw, of giving him up. All she could see was her former mate, tail wrapped around another she-cat. A she-cat that wasn't her, and never would be again.

It was time to turn her back on that portion of her life, and move on. Perhaps she would never be whole again. Perhaps she would never be able to love another tom. But she certainly wasn't going to wait around while Iceclaw toyed with other she-cats and tried to make up his mind on which one he liked best. She wasn't that kind of girl, even if she wasn't the bravest or most daring in the world.

There was no way she could make herself just forget about Iceclaw. There was absolutely no way to do that, no force in the world. She would get over him slowly, but there would always be that small part of her that would look up at him and think, I would die for you.

And she would live with that. She had to.

And I need you like a heart needs a beat

But it's nothing new, yeah

I loved you with a fire red, now it's turning blue

Heaven let me think was you

I said it's too late to apologize, too late

I said it's too late to apologize, too late

I'm holding on your rope

Got me ten feet off the ground
Retrieved from "https://warriorsfanfic.fandom.com/wiki/Apologize_(Songfic)?oldid=182844"
Community content is available under CC-BY-SA unless otherwise noted.