Anyone can edit this story just go here first

ZAFFIE YOU CAN START EDITING

This is after Wildfire's journey (I need to write it still) so if you need me to explain any of the characters tell me.

(Note: these are my made up alligences use these ones + the ones in the real books)

I could hardly remember coming to ThunderClan anymore. It had been so long ago, that Clan life seemed normal to me now. Wildfire had found me, a lost little she-cat crouched outside ThunderClan's camp, and she had brought me inside. It was a peaceful existence, most of the time, and nothing like my harsh former life, but I loved it. I thought that I loved it with all my heart.

It wasn't exactly my first Gathering when I saw him, but I hadn't been often before, and all the cats, and different scents, and huge, unfamilar pelts were confusing me. Wildfire said that they were only WindClan, and not all that big, but I still didn't like it.

It was probably because of all the distractions... or maybe StarClan had just destined for us to meet. I was jostled to the side of my Clan, padding close to the barn, and a cat appeared in the doorway. His fur was soft, and silky, a golden colour that I had never seen before, and his eyes were warm and amused, watching my predicament with hidden purrs. I stopped dead still, like every muscle in my body had seized up at once. I felt a connection between this tom and I... at least, I did until Graystripe trampled over me with his great feet.

"Sorry, Mouseleap... are you alright?" he asked anxiously, helping me up.

"I'm great," I murmured, dazed. I looked towards the barn again, but the tom and his understanding eyes were gone. I frowned. Suddenly, I felt a desperate urge to see him again... to talk to him! He might be able to give me advice, he had looked like he knew what I felt! Maybe he was used to being around other cats, and he could give me lessons! Maybe... it didn't matter. I just had to meet him.

I spent the next moon praying that he lived at the barn, that he hadn't just been passing by. I struck up a friendship with Hazeltail, and it felt dishonest, but I was desperate. I was lucky, though. StarClan must have heard my pleas, because when Berrynose, Hazeltail and Mousewhisker went to visit Smoky, their father, two sunrises after the next Gathering, Wildfire and I were allowed to accompany them. Berrynose protested, of course, but Wildfire and Mousewhisker were good friends, and I honestly did like Hazeltail, so they thought we'd be good company.

We arrived at the barn quickly, and Daisy's kits headed over to their father. I stood at the entrance, feeling my heart sink to my paws. The golden tom was nowhere to be seen. Wildfire glanced at me curiously.

"Come on, Mouseleap," she encouraged. "Aren't you going to meet Smoky?"

I opened my mouth to reply, and a wonderful scent hit me. It wreathed around me, and I felt warm and comforted. I turned away from Wildfire, and there he was.

"You're the little cat lost," he murmured in my ear. "How was the Gathering after all that?"

"F - fine," I stammered, hardly able to believe that I was actually talking to the cat who had been uppermost in my thoughts for such a long time.

"You seem just as shy away from the other cats!" he purred.

I cast a glance at Wildfire, but she was with Mousewhisker, talking to his father. A part of me heaved a sigh of relief. Wildfire was my best friend, but I wanted to talk to this tom alone.

"I'm Bracken," he added, swiping his tongue over his lips. "And I'm also starving hungry. Do you want to come catch a couple of mice? There's always plenty in the straw over there." He flicked his tail at a spot on the other side of the barn.

"S - sure!" I said, feeling my face go hot. Why couldn't I talk to him like a normal cat, not some moony mouse-brain. Mouse. That reminded me.

"I'm Mouseleap!" I burst out, my voice squeaking on the last syllable.

I sat down in the straw beside him, watching as his gaze scanned for movement. "You're so... confident around the other cats," I observed. "I wish you could teach me how you do it."

"Why? So you don't start panicking on the way to a Gathering again?" he asked. "It must have been hard for you, getting used to so many cats when you joined the Clan."

"Yes," I answered, without realising the implications of what he had said. Then I turned, and frowned at him. "How did you know I wasn't Clanborn?"

"Well, firstly, no Clanborn cat would be that shy, and secondly... I think I might have met you before. In a dream, maybe. You look perfect enough to be one!"

I spluttered, unable to force any words out, and while I was distracted he spoke again.

"We could meet up the day after every full moon. I could teach you how to act more comfortable among other cats."

He didn't phrase it as a question, but I felt compelled to answer. "Yes!" I squealed, then slapped my tail over my own mouth.

Bracken purred gently, his tail-tip just touching my flank, then he pounced into the straw, standing up with two mice in his jaws that I hadn't even noticed.

"Until next time, then, fair dream-warrior," he purred. I followed him back over to the group.

My heart felt like it was doing somersaults all the way home. 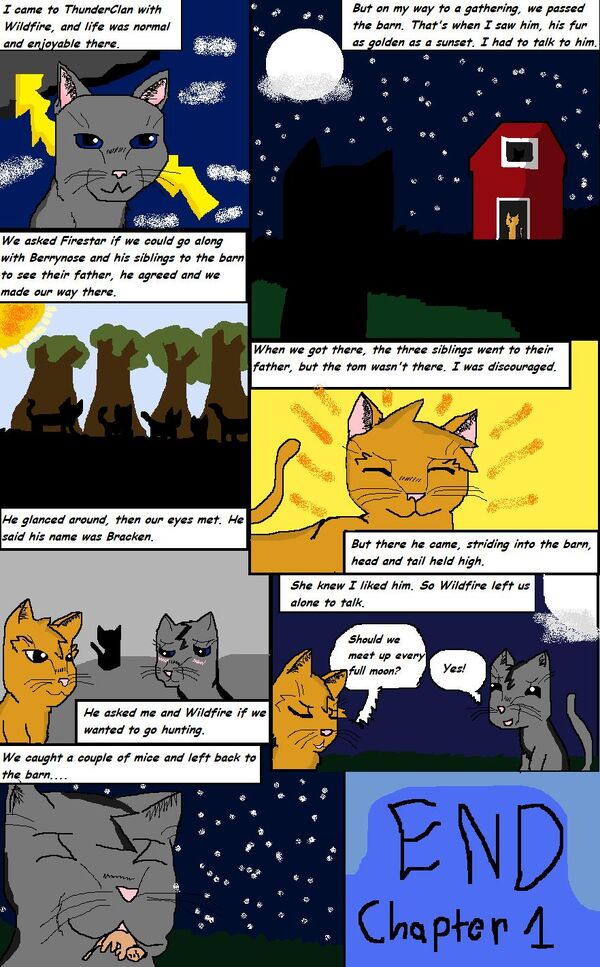 A few moons later he told me he was going to join Thunderclan and get his warrior name. So we decided that a few sunrises later he would be 'found' at the lake and a patrol would take him to Firestar. After he got to camp he would ask Firestar if he could join Thunderclan and talk to him in his den. But for some reason he wouldn't tell me what they would talk about.

So three sunrises later the dusk patrol with Thornclaw, Bramblepath, Cloudtail, and Lionblaze came back to camp with Sun and brought him to Firestar. He told them he wanted to join the clan and I heard some of the cats complaining but Wildfire told me it would be okay and reminded me about what happened when her mate Silverfrost came to Thunderclan from Riverclan and then I remembered how bad that was.

Then Firestar asked for silence and welcomed Sun to talk with him in his den. I remember Dustpelt whining about how our clan was becoming to 'mixed' and that it was better back when he was an apprentice. When Icestorm heard this she started asking him if he would prefer we leave along with Firestar, Millie, her kits, Whitewing, Cloudtail, and all the others who brought so much to this clan without pure warrior blood. After that he said something under his breath and walked over to Ferncloud.

A few moments later Firestar walked out of his den with Sun following him and stood on the highledge and called the clan.

Firestar continued "That's why you're staying here Dustpelt. Where was I... oh yes, Graystripe and I will go in the morning to watch him hunt and see if he has the potential to be a warrior. But for the night he will stay in the den next to the medicine den and because Dustpelt is so paranoid I will have Mouseleap and Wildfire take turns guarding him, after I have a word with them."

Oh no. I thought to myself he is going to be angry, but wait... what did Wildfire do?

"This clan meeting is over." Firestar meowed.

Sun was led to his den by Brambleclaw and I noticed Spiderleg and Thornclaw moving towards the thorn tunnel to guard, but my gaze traveled back to Sun, our eyes met and we stared at each other.

Wildfire nudged me "come on Firestar wants us."

I cleared my head "Okay." and we headed to Firestar's den.

There was a knot in my stomach Bracken had left with the patrol at sunrise and still wasn't back. When Wildfire and I went to Firestar's den last night he told us that we needed to quit bringing cats into the clan, that it was making him look soft. He also told us that we would help train Wolfpaw with Icestorm, we were supposed to try another 'new way' of training. "Mouseleap." "Wha...?" "It's time to go." Wildfire said. "Okay" I meowed weakly.

"Now!" Icestorm screeched. Wildfire and I jumped from the tree toward Wolfpaw, Wildfire landed squarely on his gray shoulders, I landed on his fluffy gray tail. "You jumped late!" Icestorm hissed. "I...I...er...sorry" I dropped my head in shame. "Next time pay attention!" Icestorm growled. "Leave her alone," Wildfire hissed, "she tried her best!". "No, Wildfire she's right I was distracted, I should have paid more attention." "That's not what this is about, it's about her always thinking she's so perfect and great, and better." Wildfire growled. Icestorm and her had been getting in alot of fights recently, more than normal, and it's always over little things like this. "She is great," Wolfpaw purred "she's the best mentor ever!" "Stay out of this!" Wildfire hissed. "Wildfire he's just an ap..." I said softly. "Leave him alone!" Icestorm cut me off and leaped at Wildfire. "Just like you left me alone," Wildfire yowled back "always bragging about being one moon older. One moon!" Wildfire unsheathed her claws and was about to slash Icestorm when Firestar and the hunting patrol poured into the clearing, Bracken. "What's going on here?!" Firestar yowled. "She attacked me..." "She yelled at my apprentice..." "You yelled at my friend..." "She jumped late..." "Enough!" Firestar broke in "What has gotten in to you two? If it's not argueing over who gets to go on the hunting patrol, it's this! I expect more from you," he glared at Wildfire "especially you. Now, back to camp where I can decide what to do with you."

Retrieved from "https://warriorsfanfic.fandom.com/wiki/A_love_story?oldid=125795"
Community content is available under CC-BY-SA unless otherwise noted.