There were restless pawsteps outside the nursery, as a tom paced around outside. Eyes locked to the ground, and tail lashing. He flinched and looked up as another groan erupted from the den in front of him. And it only encouraged his anxiety to spike. That was the groan of his mate, working to bring their kits into the world. The tom could do nothing but listen, Kestrelflower didn't want him inside with her since he was so stressed.

But she needs me inside right now, by her side! The tom wanted nothing more than to see his young warriors come into the world, but now here he was. Sitting outside helplessly while he has to listen to his dearest cry and groan in pain.

"Release your shoulders, and smooth your fur, son." A raspy voice murmured, the owner of it running a tail down his back. "Having kits can be stressful, but she-cats have been having kits since the dawn of time." His mother assured, sitting down. "Her first litter will always be the hardest, but she'll survive. Especially with a medicine cat like Kestrelflower. You need to relax, Pebblestrike."

The tom sighed, his mother was normally the one to calm him down. But despite it being a known fact that death from trying to birth kits was rare, the chance was still there, and it lingered in his mind. "She's in pain, Nimblestep."

"And she'll be just fine," His mother pressed, "Come and eat, it'll be awhile bef-"

"Pebblestrike," At long last, Kestrelflower had poked her head out of the nursery den. "come on, Hazelstream is waiting now, you two need to name your kits!" The medicine cat had to jump out of the way, as Pebblestrike barged past her, pushing his way through the bramble entrance.

Through the dim, filtered sunlight. He could make out the shape of his mate, resting her head on her paws. Her small form layed out and curled up to shelter two scraps of fur. "Oh dearest." Hazelstream raised her head. "Come look at them: A daughter and a son."

Pebblestrike took a few cautious steps forward. Peeking over to see his kits. They were so small... So precious... One of them looked just like his mother, sporting her dark grey pelt. The other was more like its mother, clashing dark greys and light greys. Making a pattern to that of a mask.

"I want to call the little tom Maskedkit." His mate spoke. "It's unique, and it fits with the mask over his eyes." Pebblestrike nodded. Maskedkit fit his features well... But as for his daughter.

"I want to name the she-kit: Nimblekit, after my mother." He sighed. "Nimblestep may still be a warrior, but you and I both know she's exhausting herself to be one. She may not have much left in her, and I want Nimblekit to grow up and be as caring and good-willed of a warrior as my mother is." Hazelstream purred.

"Alright then, Nimblekit and Maskedkit..."

The first thing Maskedkit was aware of was the warmth all around him, and the body that laid limp beside him. Just as peaceful and tired as he was. As they had just finished their meal, their mother settled down around them and lured them off to sleep as she always did. Softly purring to keep them calm, to let them know she was always there.

Mom- He tried to open his jaws, but nothing came out when he did. Mommy! He wanted to see what was around him. For a moment, it was hard. Having to peel open his little eyes to try and get a good look around. Right as he did, he shut them again. Not used to the light hitting the walls of the den.

He tried again, opening one eye to get used to the looks of his surroundings. Everything was mostly dark, Maskedkit let out a yawn, trying to sit up, and crane his neck to get a better look. But a soothing tongue running across his forehead just made him tired, and all it did was lure him back off into the land of restless, dark dreams.

Maskedkit let out a mewl of surprise, stumbling over his front paws and landing down on his chest. His resting had slowly become fewer and farther between. Now he urged to stretch out his stubby legs, and step around the den of filtered sunlight. "Try again, my dear." The kit was lifted up and set back down again.

Maskedkit started by stretching out a paw, stretching it as far as it'd go. He felt his small body begin wobble, and he slammed his tiny paw down in a flash to catch himself. Walking was hard! The kit fell to the ground once again, his splayed paws sliding out from underneath his small body.

Another form crashed into him, and he let out a loud yelp! "-imble'it!" Her name half rolled of his tongue, Maskedkit was still learning how to speak. And was not the best at it at all. It was hard to walk and to speak. It was just all so new to him, and it made the kit just yearn for the feeling of laying beside his mother again. It'd be much better than tripping around and getting knocked over by his... Much more skilled sister.

Nimblekit didn't have any trouble at all when walking. She just happened to be good with her balance. So, his sister was already making attempts to running and jumping around. Unfortunately, that meant that she had a bad habit of deciding to just crash into him!

"Off!" The small kit cried, "Off!" Trying to squirm out from under his sister's form. Nimblekit was purring in excitement from the run, and yelped when Maskedkit pulled himself away. Causing her to tumble over and onto her back into the grass below. "Stay off of me!" He whined. 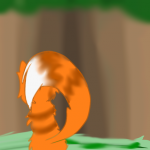